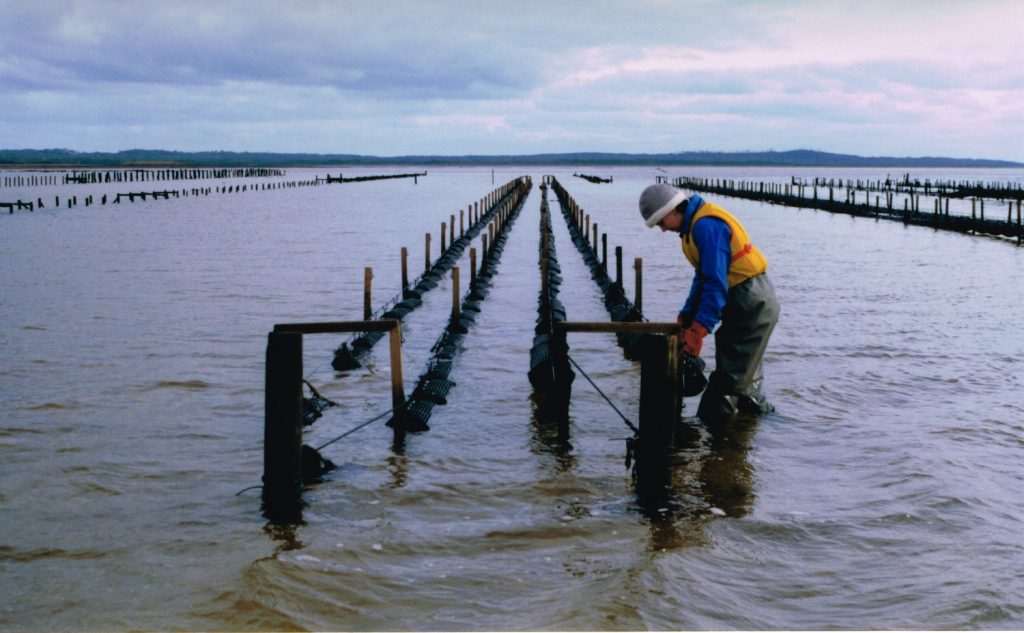 Words that begin with “C” come up frequently in conversation with Tasmanian shellfish hatchery owner Ian Duthie. Collaboration, consistency and consultation are keys to a successful shellfish industry in Australia Duthie emphasized when he spoke with Hatchery International on the phone from the soon-to-be-completed Sea Perfect hatchery site in Tasmania.

Duthie was awarded a Nuffeld Australia Farming Scholarship in 2010 that allowed him to travel and visit hatcheries across Europe and North America. The summary report he published in 2012 forms the basis for his philosophy. “The countries and regions where I saw groups cooperating were the ones that were making the most progress,” he says.

A self described “shellfish addict,” Duthie has worked with sites across Australia and New Zealand. He’s built and operated hatcheries for others, but he owns Sea Perfect together with his

“Shellfish and bivalve production is growing 5% annually around the globe,” says Duthie. “It’s got very strong growth and the opportunities are there.”

With a goal of 100 million spat at 500 micron screen, Sea Perfect is set to take advantage of that growth.

“The overall market in Australia won’t support that level of production,” says Duthie, “so we are interested in exporting spat internationally.” The company will concentrate on Pacific oysters, flat oysters and mussels. But Duthie also has his eyes on the clam and scallop market.

Duthie says there is not a reliable source of seed for Australian growers. He thinks the potential is there for Australia to double its current production. “With free trade agreements and opportunities in the TPP between China and southeast Asia, the opportunity for the export market to really blossom is there.”

“We have been exporting shellfish into China through Hong Kong in a kind of a grey market process with large tariffs placed on us,” says Duthie. “With these new agreements it looks like we will be able to really grow our capacity.”

How do you do that? Collaborate first and then compete internationally, says Duthie.

He talks about the collaboration between Australian states that led to the building of a new laboratory. “Individually we didn’t have the capacity for bio assay testing but we collaborated and we now have a lab service that is testing for all of the states. That collaboration has allowed us all to be in the marketplace in a cost effective way.”

Collaboration has also helped with disease. Australian Seafood Industries (a grower-funded selective breeding company) has led the way in selective breeding to combat Pacific Oyster Mortality Syndrome (POMS). “We are lucky to date that it’s been very isolated to a few spots in New South Wales,” says Duthie. “POMS hasn’t gone into South Australia or across to Tasmania.”

“There is a very good indication that we can breed for resistance to it,” Duthie says. “Peter Kube, the geneticist that we work with is suggesting that we will have 70% resistance in families and resistant broodstock available by 2018.”

“The French situation is saying there is a lot more resistance out there as well,” Duthie adds. But he says the French industry is very competitive, and they don’t share their results. Indeed, when he was on his scholarship tour, he was not welcome in French hatcheries and had to take photos through fences. “The New Zealanders are working very closely with us and adopting a similar breeding program.”

Collaboration within a hatchery is also important to Duthie. “Generally, one thing that I noticed in the states, with the size of the hatcheries, there is almost a ‘silo mentality’ within the hatchery,” he says. “You’ve got broodstock guys and the larvae production people and you’ve got the spat that happens somewhere else and the farming that happens somewhere else and they are all being measured on different parameters.”

“What I tended to see was they produced a lot of algae and they produced a lot of larvae but the results at the spat end aren’t where they could be, but the spat people don’t really have control over the quality of the larvae they are getting and the larvae people don’t have control over the quality of food they get.” The solution, Duthie says, is collaboration between all steps of the hatchery to attain what he calls, “A seamless throughput.”

Consistency, says Duthie is imperative. “When you place so many animals in a growing situation with possible bio security issues if you don’t take care with procedures you are going to trip.”

“The approach I take in a hatchery is a bit like the McDonald’s model,” explains Duthie. “You have to work out the individual site variables, but I try to make as much of it the same. In McDonalds there is consistency across all locations around the world. They put the burger on at exactly the same temperature, they flip it after the same amount of time, they do the fries the same way at every location.”

Consultation is the key to growing the industry within Australia and sustaining the industries’ social license. “One thing I think that Australia has done very well and Tasmania in particular, is our legislation that underpins everything is very good. We established the Marine Farm Planning Act (MFPA). The Act sets up how they are going to go about developing water in the future.”

Building the MFPA involved an extensive public and industry consultation process that included environmental base line surveys. Water sites, maximum leaseable areas and the type of aquaculture that can go on in those waters were identified. “They allowed for existing farms which gave them security,” says Duthie. “And it also meant that new development could grow.”

“We are lucky that it’s a pretty streamlined process,” says Duthie. He recounts a conversation with Bill Taylor and Gordon King from Taylor Shellfish in Washington state. “They said Gordon spent an inordinate amount of time, nearly 20 years getting a permit to grow mussels. He had young children when he first started. He has his permit now but it will be his kids that develop it.”

I asked Duthie if the process stands up to pressure from owners of expensive vacation homes.

“There is a holiday area in Tasmania where lots of people vacation in waterfront villages.” says Duthie. “The locals were used to farming and aquaculture and they got them on side to help tell the story to these new people entering the environment. The story was it’s very nice to have a view out over the water but it’s very nice when something is happening out there and so it was a cultural change.”

The biggest threat to our existence is our social license. We don’t own our bottom here, we have a 30 year lease which is renewable and we need to maintain that link.”

Sea Perfect is a family business with my wife, Anna, and I,” says Duthie. “The idea is to have the hatchery as a core and to joint-venture with other people on a lot of the developments.”

First stage is 666m2 of covered area, axenic carboy production and continuous high density algae culture systems. Larval rearing is small tank continuous flow at around 170 eyed larvae/ml (at settlement); spat is also continuous flow-thru land based to 3mm – second stage development will take this beyond into these sizes also on shore.

Duthie says he will have product available in 2016. He has a number of supportive growers who will supply him with broodstock.

Oysters will be the bread and butter, along with mussels, but they are looking at niche markets for scallops and clams. “We don’t have a clam industry in Australia, and I think we have a very strong market for clams,” Duthie says.

“We want to be doing a bit of our own growout, but also develop a system with other people who are passionate about learning and developing and innovating. We hope to build strategic relationships where we are not necessarily major farmers ourselves but we are involved, we supply and link in and that follows all the way though the supply chain so we do the hatchery production and we growout together and we market and wholesale together.”

“What I have noticed is, a whole series of separate farmers doing separate bits. People lose sight of the end product, that we are trying to get people out to dinner!”