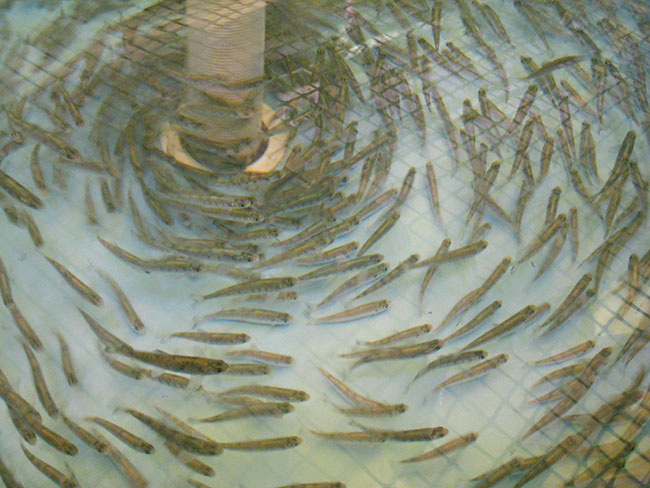 Salmonids, including Atlantic salmon (Salmo salar), are susceptible to opportunistic infection during early life-stage production. Developing salmon fry generally position near the bottom of tanks, where uneaten feed and waste solids can accumulate and lead to gill irritation and subsequent infection by ubiquitous opportunists.

One such opportunistic pathogen group commonly observed during the fry culture stage at The Conservation Fund Freshwater Institute (FI) is oomycetes of the Saprolegnia genus, which can colonize damaged skin and gills and ultimately lead to osmotic and/or respiratory failure. A spike of Saprolegnia spp. infection during juvenile Atlantic salmon production can be associated with increased mortality, exponential loss of fish, and severe economic consequences if not properly controlled.

Previous treatment options for saprolegniasis (i.e., a Saprolegnia spp. outbreak) included the use of malachite green, which was subsequently found to be carcinogenic and is now banned from use in food fish production. Currently, a range of alternative compounds, including benzoic acid, acetic acid, iodoacetic acid, copper sulfate, peracetic acid, and hydrogen peroxide, are being evaluated for their efficacy in combating saprolegniasis. An ideal treatment compound would not only control saprolegniasis but would also prove to be environmentally benign.

Researchers at FI recently began to evaluate the treatment efficacy of peracetic acid (PAA) and hydrogen peroxide (H2O2). Both of these compounds degrade to non-toxic byproducts such as water (H2O), thereby reducing concerns related to facility discharge. Currently, PAA and H2O2 have differing approval statuses for aquaculture, depending on region. In the European Union, for example, PAA is approved for use in aquaculture settings with food fish present; however, in the U.S. PAA has only been approved by the Environmental Protection Agency (EPA) for use as a surface disinfectant on fish tank walls and aquaculture equipment in the absence of fish. H2O2, on the other hand, is approved by the U.S. Food and Drug Administration (FDA) to treat a number of diseases in freshwater-reared coldwater finfish. Considering the limited treatment options available for saprolegniasis, research that seeks to identify optimal dosages of these environmentally-friendly compounds is highly important.

To study the effects of PAA and H2O2 for decreasing mortalities associated with opportunistic infection, twelve replicated flow-through tanks housing juvenile Atlantic salmon (60 days post-hatch; 0.47 ± 0.02 g) were exposed to daily stressors including i) over feeding (120 per cent of typical daily ration) and ii) periodic netting and handling of fish. Treatments consisted of a 30-minute static bath of 15 mg/L H2O2, 0.2 mg/L PAA, 0.5 mg/L PAA, and a no-treatment control (n=3) administered five days per week. Survival was tracked daily by removing and counting deceased fry, and water quality parameters including total ammonia nitrogen (TAN), total suspended solids (TSS), temperature, DO, pH, carbon dioxide (CO2), alkalinity, and total phosphorous were assessed once weekly. At weeks 2 and 4, skin and gill samples were also collected for histopathology. Water samples were collected pre-treatment and at week 2 and 4 to quantify Saprolegnia spp. concentrations.

Important findings
H2O2
Atlantic salmon exposed to the H2O2 treatment demonstrated a significantly higher survival rate of 83.7 ± 1.7 per cent compared to the control at 69.5 ± 5.2 per cent. These results demonstrate that a relatively low H2O2 dose can effectively combat opportunistic infection during juvenile Atlantic salmon production. Currently, H2O2’s approved use by the FDA allows three alternating-day 75 mg/L treatments for 60 minutes in a flow-through system or static bath, which has been shown to be effective against saprolegniasis. It is established that relatively high doses (e.g., >60 mg/L H2O2) can be damaging to recirculation aquaculture system (RAS) biofilters, and although the present study was carried out in flow-through tanks, our results show promise that a low-dose H2O2 treatment (15 mg/L) could be effective for controlling saprolegniasis in RAS (although further research is required to confirm). H2O2 did not show any compelling effects on water quality.

PAA
Survival rates of Atlantic salmon exposed to 0.2 and 0.5 mg/L PAA were 76.6 ± 0.6 per cent and 77.4 ± 3.0 per cent, respectively, and were not found to be statistically different when compared to survival demonstrated in the control (69.5 ± 5.2 per cent). However, both PAA treatments significantly reduced TSS in the tank water. Previous on-site research has shown that a semi-continuous low dose (0.05-0.30 mg/L) application of PAA in RAS yielded no reduction of TSS. The reason for this discrepancy is that the semi-continuous application approach likely promoted biofilm growth and proliferation of certain bacterial populations through semi-constant addition of dissolved carbon.

Histopathological evaluation of gill and skin tissue showed overall good health across all treatments despite the observed mortality. A general decrease in Saprolegnia spp. counts in the culture water was observed over the course of the study, but this did not correlate with survival differences between treatments or trends in mortality. It is possible that other opportunistic pathogens were involved with or responsible for the observed mortality., and that these other potential pathogens may have been more susceptible to H2O2 than PAA. This could explain the observed differences in survival rates among treatments. Although microscopic examination of gills from euthanized moribund fish showed the presence of organisms resembling Saprolengia spp., it is important to note that infection by Saprolegnia spp. does not always result in disease and death.

This research adds to the body of knowledge regarding use of H2O2 and PAA in aquaculture applications, but additional research is still required to identify the proper dose and application method for both H2O2 and PAA for various Atlantic salmon life stages. Additional research may also be required to more broadly evaluate its effect on the microbiome of aquaculture systems, including RAS, with particular focus on effects to a broader range of pathogens.

There are still many more possibilities for the use of H2O2 and PAA in aquaculture that need to be explored, but in the meantime this research has shown the potential that these environmentally-friendly compounds have, whether it be treatment of pathogens or improvement of water quality. Overall, these findings provide additional guidance for producers and legislators to consider relative to the use of H2O2 and PAA for water quality control and maintenance of optimal Atlantic salmon health.

Anna DiCocco is a fish culture technician at The Conservation Fund’s Freshwater Institute.

Christopher Good is director of research at The Conservation Fund’s Freshwater Institute.