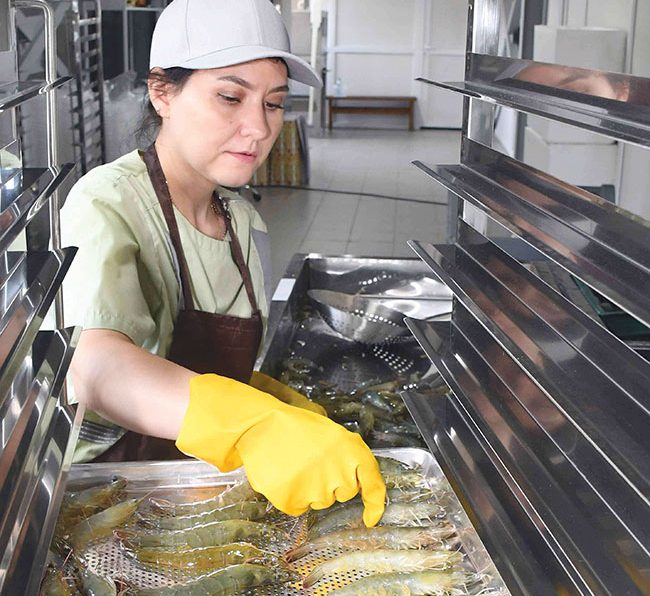 Kazakhstan’s first shrimp farm has launched, but not without its challenges. (Photo: Krevetka.kz)

A group of Kazakhstan farmers have launched the first shrimp (Litopenaeus vannamei) farm near Almaty, mulling plans of establishing aquafeed and broodstock production.

The farm was originally scheduled to become operational in early 2020, said Anton Ruppo, co-owner of Krevetka.kz.

“We ordered the first batch of shrimp fry from Thailand, paid for 200,000 units and expected their delivery in just a couple of weeks. But, the shrimp didn’t reach us then: a pandemic began, and all borders were shut,” said Ruppo.

The company spent a lot of effort to get water to appropriate condition and struggled to keep it that way for the next two years. This led to a paradoxical situation when the farm kept running without prawns.

“For two years, we did not turn off our systems for a single day, paid all utility bills, and paid salaries to employees. We could not bring fish here because the microflora would be disturbed, and we would have to change all the water, re-purchase all the minerals and salt,” he said.

The long-awaited batch of shrimp fry arrived only in May 2022. From the first 200,000 units, almost half died during transportation. In addition, some share of the broodstock died already in the pools.

“To launch the fry, not only water prepared according to chemical parameters was needed. It must also contain certain bacteria from the shrimp themselves—such a vicious circle. So, when we received the first batch of fry, they ended up in prepared but not entirely favourable water conditions. Therefore, we lost another part of the shrimps from this batch,” said Ruppo.

The company worked hard to convince local restaurants to try their product, which eventually bore fruits. Today, the fish farm has signed contracts with 15 Almaty businesses. With the designed production performance limited to 45 tonnes per year, the company has no opportunity to reach out to the mass market segment. However, the capacity expansion is already around the corner.

“The next stage of our development is associated with feed production. We have a formula, an understanding of how to make it and by what technology, so we will start creating it in the near future,” claimed Ruppo, adding that producing broodstock is a more ambitious goal.

“We want to get our own broodstock to not depend on imported fry. This will be a breakthrough for Kazakhstan in terms of science. On this issue, we are starting to interact with the [Russian] Institute of Fisheries, attracting foreign specialists. Now we are preparing a kind of laboratory – where we will need to create a certain ecosystem and grow algae. This is a very labour-intensive process. I think we can do it,” he said.