Salmonids lay their eggs in gravel redds for a reason, yet the use of rearing substrate in salmon and trout hatcheries, is not a common practice. Hatchery personnel at the Freshwater Fisheries Society of BC (FFSBC), on the west coast of Canada, have recently quantified the benefits of using substrate for early rearing of trout. 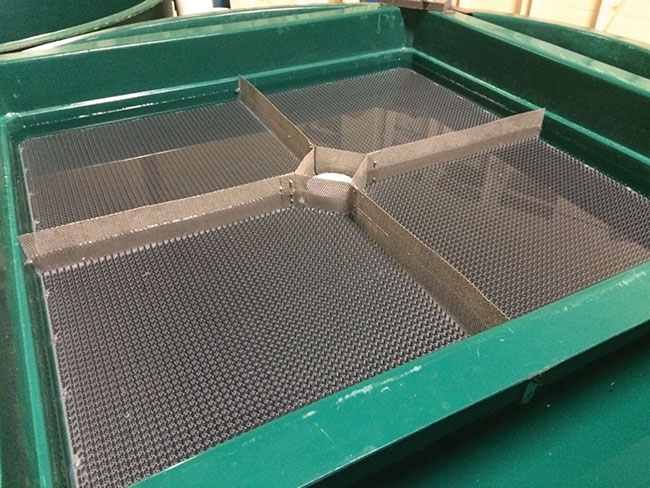 Biologists at the Freshwater Fisheries Society of BC experimented on whether using substrate during incubation offers growth benefits for the fish.

Marcus Boucher, a fish biologist with the Society, shared the results of some recent experiments with substrate at the North West Fish Culture Conference in Portland Oregon held in December.

“We know that three things – having larger fry, larger fish at first feeding, and continued growth after ponding – are all really important whether you are raising fish for recreational fishing, conservation or commercial aquaculture,” says Boucher. The Fresh Water Fisheries Society works with the former, raising over eight million trout (Oncorhynchus mykiss), char (Salvelinus alpinus) and kokanee salmon (Oncorhynchus nerka) in six hatcheries yearly, to stock in 800 lakes across British Columbia.

While hatchery operators can achieve faster growth by increasing water temperature and raising feed ratios, Boucher says they were looking for something simpler. “We wanted to know if we could make gains by simply giving these fish an optimal environment.”

It turns out, imitating mother nature pays off.

To understand why substrate is effective, Boucher says you need to consider an alevin. “The alevin has got a pretty big egg sack, but that is all of its energy budget, the yolk is finite,” Boucher points out. “It supplies all of what it needs for growth, development and metabolism, before it is able to take food from the external environment. The more resources an alevin spends on swimming or constantly righting itself up when it falls over, the less is available for any other process, especially growth.”

“It’s a well-defined fact that alevin move less in substrate,” says Boucher. “If you are moving less you are going to have more yolk resources available for growth.”

The FFSBC tested two rigid plastic substrates in small-scale studies. “Before putting this into any level of production we really wanted to say what can we expect, what is it like to use, and get feedback from our fish culturists,” says Boucher. “We wanted to collect some data so we have some information to say, ‘Ok, after a couple of seasons trying it, here’s what we can expect out the other end.’”

First trial
The first test used the Norwegian designed Alvestad Easy Hatch substrate mat. “I like this one because the bottom is perforated. You are going to be getting good gas flow and water exchange,” says Boucher. “I like that it’s rigid, but also the space between the fingers for our relatively small egg size was good.”

The hatchery built a quadrant shelf to fit in a three-foot, 1,200-liter combi tank and lined the bottom with the substrate mat. The control was a stack of standard heath trays.

Some 5,600 spawned eggs were reared in an up-welling MacDonalds style jar until they were eyed. Half went into the substrate shelf and half into heath stacks. Both were reared at 10 degrees Celsius on the same well water and in the same facility.

“This was all done at production densities right on the production floor with the fish culturalist helping,” Boucher explains. “That to me was the most meaningful way to do this, so we did actually see what we can expect in a real honest to goodness situation.”

“Then we had to sample them,” says Boucher. “We wanted to know if there were any growth gains? Are we going to be saving any time?”

The team defined performance by looking at growth in both length and weight.  They wanted to know size at ponding (first feeding) and the time it takes to get to half-gram and time to one gram. They also looked at survival rates.

During incubation, the fish were sampled every three days, 90 fish per treatment, looking at length and weight. Once they were ponded, samples were taken every week. “We proved these fish out all the way to one gram,” adds Boucher.

At ponding, substrate fish were 12 percent larger, says Boucher. “That is significant because these fish are at 10 degrees and have only been rearing in the substrate about 20 days.”

Both sample groups were ponded into combi tanks. Size difference continued to increase throughout the evaluation, with those fish from the substrate continuing to grow larger. Fish from the substrate group reached a half gram 10 days earlier than the control group, notes Boucher. “Remember they had the same temperature, same loading density, same feed rate. We even checked that velocity and oxygen was controlled for,” he adds. “So, what we are seeing here is definitely the effect of the substrate.”

“We saw that we got fish to one gram 14 days earlier,” says Boucher. It was 54 days after they came out of the substrate.

Biologists at the Freshwater Fisheries Society of BC experimented on whether using substrate during incubation offers growth benefits for the fish.

Second trial
Boucher says they do most of the incubation in heath stacks. They wanted to adapt the substrate into the rearing trays. Substrate mats were cut to fit and adhered into the heath stack. “We just removed the bottom PVC screen and it held together really well.”

This was a much smaller version of the first trial. It was conducted only until the eggs would have been ponded. “The goal was to say, ‘OK, we got pretty good results from the first trial. Are these trays going to hold together? Are they going to be effective,’” Boucher recalls. “And would we be interested in using these again?”

The eggs were again reared to eye stage in up-welling jars and loaded in equal density into three substrate modified trays and three regular heath trays again at 10 degrees. Trays were alternated in the stack. Fungus was controlled by a parasite S drip system.

“Again, we got 12 percent larger fish at ponding,” says Boucher. “It was interesting seeing pretty consistent results.” The alevin also appeared to move less in the substrate. Fungus in the trays was negligible.

There were no difference in losses in either of the tests, Boucher says.

Using substrate in early rearing raises larger fish in less time. “What we are talking about is a higher quality product at the end.”

Product development
Incubation systems provider MariSource confirms they installed the substrate that Boucher used in their rearing trays and are now working on a permanent solution. “We are working to design it so that we can injection mold the substrate into the bottom of the tray all in one piece,” says Mike Fudge MariSource sales manager.

Fudge says the substrate would replace the PVC mesh screen that is currently used to line the bottom of the trays. “Those screens have to be cleaned very carefully,” he points out. “They also have to be replaced every couple of years.”

The injection molded unit could be cleaned with a pressure washer. While it will come at a price premium, it will save on the PVC screen maintenance.

It enables the up-welling and flow-through design of the tray to continue to function. “It’s a good concept, it makes the eggs feel like they are in the bottom of a river bed,” says Fudge. “And you are getting a much better fish at the end.”