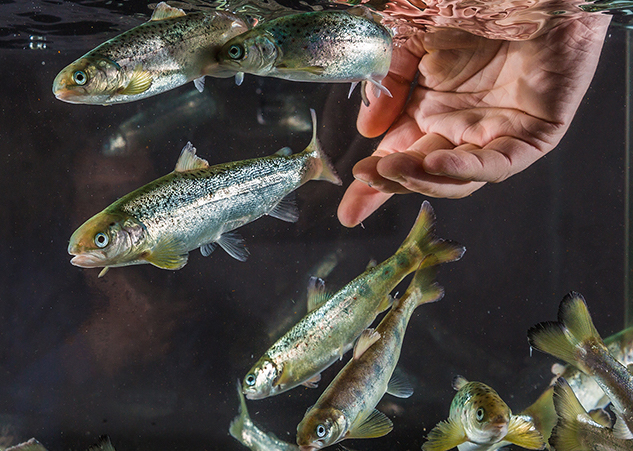 A fitness program for smolt results in better growth potential

In the recently completed FitSmolt-project Norwegian researchers developed a test to rank the swimming capacity of salmon fry. Not surprisingly, the project confirmed that fitter fry in the hatchery led to smolt better equipped to withstand sea entry.

Each year millions of juvenile salmon die after output to sea in Norwegian salmon farms according to unofficial figures from the Directorate of Fisheries.

However, research from the Norwegian research institute Nofima indicates that many of these would survive and go to market if they became fitter in the hatchery.

In an article published by Nofima, researcher Sven Martin Jørgensen points out that a significant proportion of loss in salmon production is due to poor smolt quality. Smolt in poor condition are more susceptible to disease and more vulnerable to handling and stress. Implementing a fitness regime and/or selecting more robust fish in the juvenile phase would produce smolt that were better equipped to withstand stress in the sea phase.

Jørgensen recommends several different measures that he claims would be effective.

In the recently completed FitSmolt-project researchers developed a test to rank the swimming capacity of salmon fry. Amongst other things, the worst swimmers had poorer heart health compared with the best swimmers. These differences were also present eight months later. By this time the salmon parr had become post-smolts, and the best swimmers had grown 5-8% better and had significantly less laceration of the fins compared to the poorest swimmers.

“By removing the worst swimmers, we could be left with smolts that have both better growth potential and stronger bodies, which are crucial for oxygen transport, i.e. more robust smolt,” Jørgensen stated.

He said they also had ideas about how this could be done at an even earlier stage, for instance at start feeding.

According to Jørgensen, and others in the field, exercise challenges the salmon and allows them to grow better; it builds stronger cardiovascular swimming muscles and increases the fish’s physiological capacity.

In FitSmolt, Jørgensen says that they trained salmon from the juvenile stage. This led to a greater tolerance of even higher exercise intensity during smoltification. The positive impact of exercise was obvious; better growth, enhanced heart health and physiology, as well as significantly higher survival under PD-infection trials. He says several aquaculture companies are already working on adjusting current speeds in tanks to train their salmon, and he believes more will follow in the near future.

Results from FitSmolt also revealed that farming which focuses on fast growth can be compromising for the physiological performance and robustness of the fish. This was apparent when comparing farmed salmon with wild salmon.

Jørgensen believes that the main focus of future breeding programs should be strategies to strengthen the heart health and physiology of farmed salmon. He added that in future, mortality rates could go down if farmers implemented these measures.