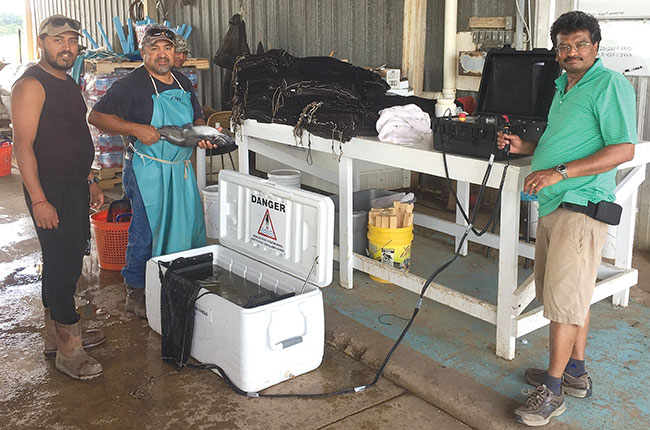 A U.S. study has identified the portable electrosedation system (PES) as an alternative method of sedating channel catfish (Ictalurus punctatus) broodstock. It does not increase stress, takes only a few seconds to use and costs exponentially less.

“The most important aspect of this study was the comparison effect of PES and MS-222 on spawning, hatch and fry per pound of body weight in the female channel catfish. For these three parameters, there were no differences between MS-222 and PES,” said authors Dr. Anita Kelly of Auburn University-Alabama Fish Farming Center, and Dr. Nagaraj Chatakondi of the USDA-ARS Warmwater Aquaculture Research Unit in their research article, “Anaesthetizing Female Channel Catfish Brooders using a Portable Electrosedation System,” published in the North American Journal of Aquaculture.

They said the findings are important for commercial catfish aquaculture because of cost-savings and the potential to replace MS-222 with PES, which does not require FDA approval.

A commercially available PES equipment costs around $10,000, equivalent to a two to three-year usage of MS-222 in a typical catfish hatchery, Chatakondi said.

Since there is no maintenance or expendable costs for routine use, it would cost less than a penny per broodfish. For an effective sedation at 200 ppm, MS-222 is estimated to cost $4.56 per use or about $0.30 to 0.50 per broodfish.

Chatakondi cited the other advantages of using PES over MS-222. “It is quick – it only takes a few seconds – and effective method to sedate channel catfish. It can be tailored to any of the six stages of sedation and various exposure periods for field applications.”

The reduction in stress response during sedation, along with improved handling conditions during transportation, handling and stocking, will reduce post-spawning mortalities of broodfish in catfish hatcheries.

He continued, “It has no adverse effect on reproductive traits for routine hatchery use. No chemical is up taken by fish or disposal during PES sedation process, resulting in no withdrawal period prior to be released for human consumption.”

The best PES setting for keeping the fish sedated through the egg-stripping process is at 100 volts, 25 percent duty cycle at 30 Hz, and shocking the fish for four seconds.

One of the drawbacks of MS-222, they said, is the difficulty in administering precise dose under commercial conditions because of variables such as size and level of fish robustness.