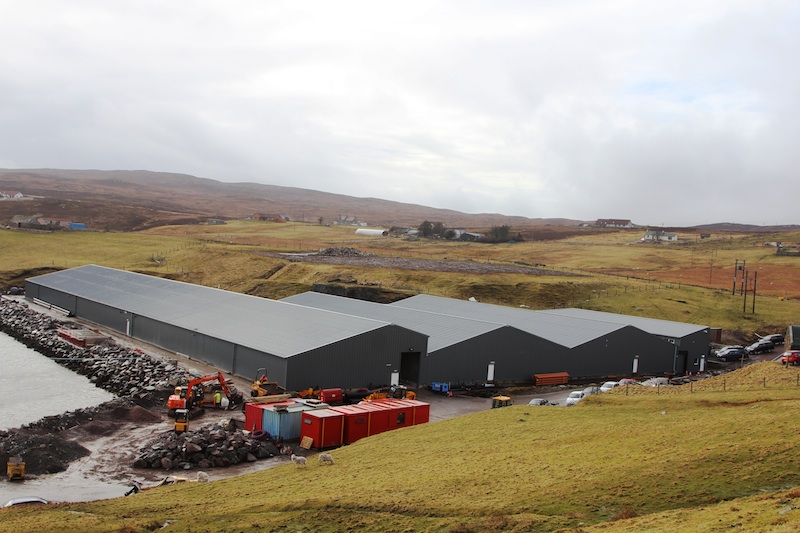 This £15 million hatchery will provide 14 jobs and allow Grieg Seafood Hjaltland to provide about 85% of the smolts the company needs for its 21 farms in Shetland.

As this issue of HI goes to press, Grieg Seafood Hjaltland will have completed the construction of a new hi-tech salmon hatchery in the Girlsta area of the Shetland Islands. The £15 million facility will provide 14 jobs and allow Grieg to provide up to five million smolts (about 85% of what the company needs) for its 21 farms in Shetland. Until now the smolt have been transported from mainland Scotland.

The unit is fed by water from Girlsta Loch a mile or so away. Pettersen said that it treats and recirculates well over 90% of its water.

Interim hatchery manager Jon Walden is quoted as saying, “It’s a big step up. Previously the hatcheries there [at Girlsta] have been limited by the use of water, but with the recirculation technology that we have now, and that’s becoming widespread in the industry, both in Scotland and in Norway, we are able to produce an awful lot more fish in an awful lot less water. It’s a very efficient use of water.”

The hatchery has three biofilter units. The fry department is the smallest, with a capacity of handling a daily feed rate up to 800 kg, while the parr department can take 2 tons of feed per day and the smolt department 4.5 tons. The intake water is first treated with ozone and then run through UV filters. Both the water-treatment systems as well as the tanks are outfitted with sensors, monitors, alarms and cameras to keep an eye on the tanks, fish and water quality.

“Of course, there are sensors for things like oxygen, and we test regularly for ammonium, carbon dioxide and nitrates,” Pettersen explained.

The systems also include water heaters and coolers so that the fish are kept at the growth level and rate the company requires.

The company has a permit to discharge its waste – such as faeces and tiny amounts of unused feed – into the sea loch just outside the smolt building. “There’s a couple of mussel farms out there that I’m sure will appreciate our discharge,” Pettersen commented.

The organic load added to the sea loch is low, and at present he sees no need to install sedimentation tanks. But recent developments in lice treatment may result in the hatchery needing to feed the smolt an anti-lice chemical prior to deliveries to the sea sites. It’s likely then that authorities would require reductions in the discharge from the hatchery, so plans are to install a sediment-trapping tank.

Pettersen also told HI that the company has no intention of developing its own broodstock in the Shetlands. A reliable supplier of excellent-quality eggs in Norway provides Grieg with what it needs.