Production of steelhead smolts using natural origin broodstock can be optimized by sorting slower growing individuals several weeks after ponding and rearing them as age-2 smolts (S2), according to combined results from the hatchery and laboratory experiments of the U.S. National Oceanic and Atmospheric Administration’s Northwest Fisheries Science Center, Manchester Research Station. 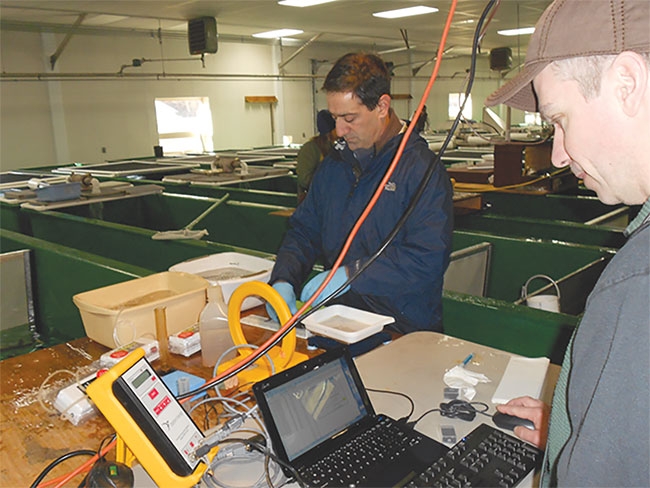 Hatchery rearing practices
Tatara and colleagues conducted experiments on changing hatchery-rearing practices for steelhead smolts to facilitate use of natural origin broodstock. Differences in growth rate were noticeable within weeks of ponding, hence the sorting procedure.

“The faster growing individuals have a higher likelihood of smolting at age-1 using traditional S1 rearing procedures. We hypothesize this approach would reduce selection for rapid growth, increase smoltification rates, reduce rates of precocious male maturation, and lower the potential for residualism,” they cited in the study abstract.

Tatara said the S2 rearing regime for the NOAA experiments differed only in the ration, feeding schedule, and duration in culture. Identical tanks, water supply and feed were used.

The difference was in the reduced S2 steelhead rations, which were calculated to modulate growth that more closely mimicked the growth patterns of natural steelhead.

“The S2 smolt size target was the same as the S1, but the S2 steelhead had an additional year to grow. Consequently, the ration – percent of body mass fed – was lower than the S1 regime, and S2 steelhead were only fed three times a week,” he explained.

“The cost reduction is in comparison to S2 rearing. If the approach is successful, we expect that costs for this hybrid approach are somewhere between a S1 and S2 rearing strategy,” he said.

Solely using a S2 rearing strategy means that two brood years of steelhead are being cultured in the hatchery simultaneously, requiring twice the raceway space as an S1 program. If hatcheries could raise their fast-growing steelhead to smolt as S1s, it would reduce the raceway space needed.

He stressed that splitting steelhead into slow- and fast-growing rearing regimes is a more appropriate approach when using natural-origin broodstocks in a conservation hatchery setting and not for harvest hatcheries, which often use domesticated stocks selected for rapid growth.

“Having fewer raceways to tend means that less labor and water are needed to produce the same number of smolts,” he said. One of the highest expenses of fish culture is the labor required to produce fish that will meet post-release objectives.

“If successful, the cost per smolt produced would decrease, because the combined percentage of smolts produced by splitting fish into high and low growth groups is expected to be higher than rearing all steelhead exclusively as S1s or S2s, as suggested by our residual data,” he said.