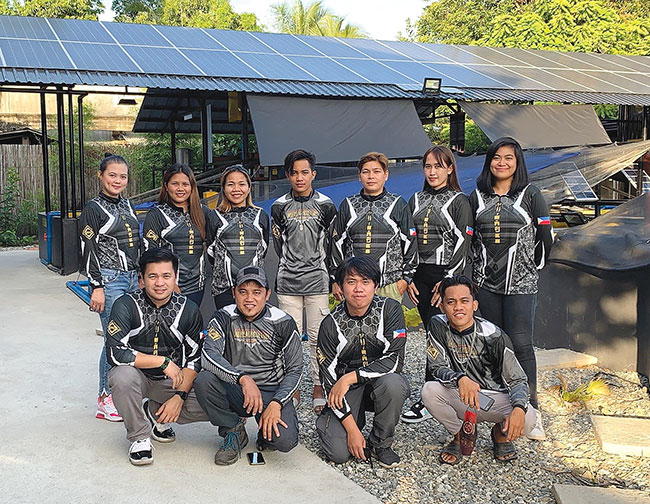 The team members wear uniform shirts with sharp graphics in gray metallic hues, giving off this futuristic vibe. “You are what you wear,” the leader, architect Francis Neil Quijano, tells Hatchery International. They are bearers of what integration of science and technology can do to push the Philippines’ aquaculture industry forward to a sustainable future.

Quijano is prime mover and chief architect of AGRITEKTURA, a polycentric, integrated and multidisciplinary group with the common goal of boosting food production. Core businesses are grouped under architecture, “agritecture” and “aquatecture.” It provides programs, projects and products.

The headquarters is in Roxas, Oriental Mindoro in the region of MIMAROPA (Mindoro, Marinduque, Romblon and Palawan).

AGRITEKTURA rose to national prominence in March 2021, when it inaugurated the region’s first solar-powered RAS tilapia and milkfish hatchery and intensive aquaculture facility for white shrimp.

The project was funded by the Department of Science and Technology (DOST)-MIMAROPA through one of its flagship programs, the Small Enterprise Technology Upgrading Program (SETUP). The government agency “aims to promote smart aquaculture to encourage the industry to adopt smart technologies and processes to increase productivity and competitiveness” through this prototype farm. AGRITEKTURA sees themselves as an extension of the government and Quijano encourages people to see them for consultation, training or technical concerns.

Roxas is a fishing and farming community. While the agricultural sector could do more with improvements, the aquaculture sector is in dire straits.  “Revival” is what Quijano says it needs. In the aquaculture districts of San Jose and Dayanghirang, commercial activities in the earthen fishponds are far from being robust. Some are no longer operational. He pins these down to financial, operational and technological concerns.

Hatchery solution
“The annual Philippine demand for milkfish fry is two billion. Of this, one billion is imported. In Roxas, you will notice that tilapia in the market still comes from Batangas,” he says in a radio program, referring to Mindoro’s neighboring province. “So we locals were challenged. We said, ‘How about coming up with a hatchery?’ If we do this, we could revive aquaculture in San Jose and Dayanghirang. We could provide the fingerlings. We could revive our aquaculture industry at last. That is the aim of our facility.” The ultimate goal is to address the food security challenge of the country.

Science and technology is the way forward, he says. He learned this the practical and academic way by participating in trainings at the country’s leading platforms at the Bureau of Fisheries and Aquatic Resources (BFAR), Southeast Asian Fisheries Development Center, Agricultural Training Institute and DOST.

Eight years ago, Quijano turned his back on a successful career as an architect in Manila to return to his Roxas hometown to pursue farming. Growing up, his grandmother had exposed him to farming and fishing.

He set up a multispecies hatchery shed in San Jose. Among his innovations was focusing on niche markets, soft-shell crabs being one of the products. It was considered practically worthless in the locality but he was very aware that it commanded premium price in the global market. For tilapia, he chose the Molobicus, a hybrid species that thrives in high-saline water but grows very big. While freshwater tilapia dies at salinity levels of 10 to 15 parts per thousand, this hybrid can tolerate and grow at 35 ppt.

AGRITEKTURA was the first to have the species in the region, and currently the only one to have Molobicus broodstock.

DOST-MIMAROPA, which had been eyeing to start a major aquaculture project in the area for the past three years, took note of the progressive group and approached them with a government-funded project. 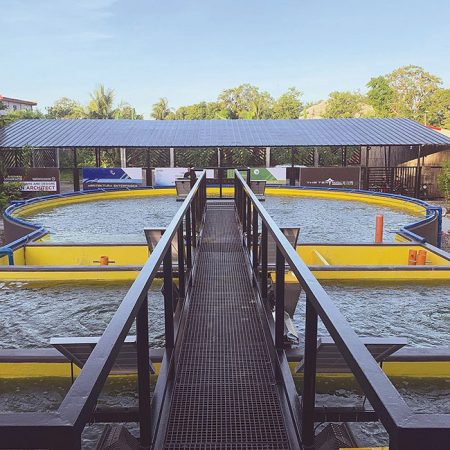 The 1,000 m2 inland facility in the middle of the town proves that aquafarming is feasible with S&T support. photo: AGRITEKTURA

Running a tight SHIP
Through SETUP, Quijano’s team introduced an aquafarm in the middle of San Jose town. The specialized modular construction system led to a faster construction time and maximized usage of the 1,000-square-metre area.

“I dream of a centralized aqua facility in every location. That’s why I came up with the idea of the SHIP: sustainable, smart, holistic, healthy, integrated and interactive protofarm. Indeed, every locality will be self-reliant,” he says.

Species at AGRITEKTURA facility were recommended by its partner, BFAR. At press time in May, tilapia fingerling production is in full operations. There are 200 Molobicus tilapia broodstock with an annual production of 2.4 million fingerlings. With the delivery in June of 10,000 broodstock for pairing, annual output will soar to 72 million.

Fingerling survival rate is at 90 per cent, which he says is higher than industry average based on observations on the other hatcheries he has visited. “Being smart means you have the complete gadgets and equipment needed. Meaning you have a high rate of production success,” he explains.

AGRITEKTURA’s technology and innovation are categorized into infrastructure, input and information. “We must have a good facility to operate,” he says. “Since our facility is aligned with international standard, we were able to explore different technologies to improve the production.”

Right breed and right nutrition go into input. With probiotics in broodstock and fingerling diet, resistance to diseases and 10 t0 30 per cent in feeds consumption. Information is synonymous to “right production system.”

A tight team of four mans the hatchery operation: two in production; one who does sales and marketing and is also the social media specialist; and one shipping personnel.

All together, these make the aquaculture unit much easier to manage. The space is compact but high in production. It is a working prototype and a proof of their concept.

For every tilapia fingerling production season, 20,000 are used for grow-out. The rest are allocated for sale and for an outreach program. It is in the latter where science and technoogy and faith-based practices connect.

“Every first month of the year we share blessings to the community through the 1HP – first harvest production – inspired from the Bible,” he says.

Quijano is also a pastor at a Pentecostal Church, The Church of God World Missions Philippines in Mindoro. “Our mission is community transformation and empowerment. We conduct regular Life Transfomation Program in partnership with The Tentmakers Community. Every first quarter of the year, we apply the Bible’s first fruit system wherein we give free fingerlings to the community. We conduct regular trainings and workshop to community,” he says.

When the word first got around that Quijano and his group were going all out with the project, not many were encouraging. He wasn’t at all surprised by the feedback. “Well, expect it in the Philippines. People will doubt you but upon seeing the realization of the prototype we got instant followers,” he says.

New clients and new projects are the measurable results. Among these are local government units, the Armed Forces of the Philippines and schools. They will also be working with the Roxas tourism and agriculture offices on a mangrove forest revival project.

“This is part of the aquaculture revival… This is not just to revive the mangrove forest but also to excite, inspire different [industry] associations. Mindoro is very small. But if you look at Google Earth, it has a very big area for aquaculture,” he says in the radio program. “But the point is, why do we need to import? What do we do? Be depressed? No. We need to be inspired.”