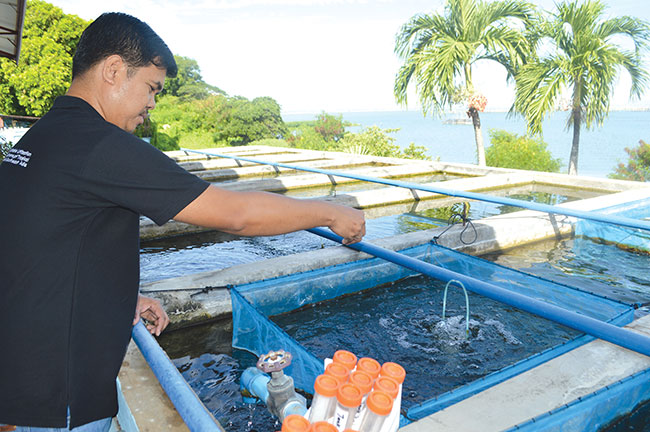 Dr. Frolan Aya (left) feeding silver therapon reared at a hatchery managed by researchers at the University of the Philippines Los Banos. Locally known as ayungin, the silver therapon is a popular staple among Filipino families. The hatchery technique developed by Aya and his team could mean a resurgence of this well-loved seafood.

At first blush, you might not think much of the Leiopotherapon plumbeus or silver therapon. A fully grown silver therapon measures not more than 16cm in length. Yet, this tiny freshwater species, which is related to the Australian silver perch, ranks high among the preferred table fare of Filipino families. The trouble is the fish, locally known as ayungin, might be a victim of its own popularity with fears that it is rapidly being fished to extinction.

Fortunately, researchers at the Aquaculture Department (AQD) of the South Asian Fisheries Development Centre (SEAFDEC) have developed a new hatchery technique that they believe could halt the decline of the silver therapon’s population.

Dinner table staple
The silver therapon is endemic to Laguna Bay, the Philippines’ largest lake. The species has also been introduced to two volcanic lakes in the country.

“The ayungin is popular among Filipinos because it is the tastiest among all native freshwater fish species. It is usually grilled or prepared as part of a tangy soup with tamarind or guava,” says Dr. Frolan Aya of SEAFDEC. “Not many people know that it is the favourite fish of the Philippine national hero, Dr. Jose Rizal.”

Intense fishing pressure, rapid deterioration of lake water quality, and the introduction of invasive alien species have caused the alarming decline of the wild silver therapon stock over the years.

“Not much of its biology is known until to date, even as its habitat has become increasingly degraded over the years,” says Dr. Maria Garcia, from the University of the Philippines’ Biology Faculty. “The continuing threat of global warming and habitat loss has made it imperative to conserve the country’s rich faunal diversity, which includes the silver therapon.”

According to the Philippine Statistics Authority, silver therapon catch in the country has declined from 4,765 metric tons in 2002 to only 1,408 metric tons in 2018. The dwindling supply has resulted in skyrocketing prices of the species in local markets.

For instance, a kilo of silver therapon can command as much as US$16 – roughly half the daily wage of the average Filipino worker.

Seeds of inspiration
Aya says he developed an interest in the biology of the silver therapon because he saw a great need for collecting useful data about the fish.

If such information could be gathered, it could be used to develop a full-scale and operational hatchery technique for aquaculture and the means to conserve and manage the silver therapon population.

“The importance of the development of the breeding and larval rearing methods for the native fish ayungin can be gauged from the fact that this has been the subject of years of research not only of SEAFDEC/AQD but also of the University of the Philippines in Los Banos, which pioneered the work with government funds,” according to one of Aya’s colleagues, Dr. Maria Rowena Romana-Eguia.

Romana-Eguia is a scientist and the program leader of SEAFDEC/AQD’s Quality Seed for Sustainable Aquaculture Program as well as the commodity team leader for freshwater species.

Unlike other local species such as the tilapia and milkfish, the silver therapon has long been considered not ideal for aquaculture.

It was through the scientific efforts of SEAFDEC and U.P. Los Banos researchers that the technology of induced spawning and hatchery rearing of the silver therapon were achieved, says Romana-Eguia.

“Our fish farmers, particularly those in lakeshore towns where these fish are caught (and are soon to be farmed and sold) shall benefit entirely from the technology as this species is preferred by local consumers despite its high market price,” according to Romana-Eguia.

Production protocol
The hatchery technique developed by Aya, was granted a patent by the Intellectual Property Office of the Philippines on Oct. 17, 2019.

The tanks they used to rear the silver therapon larvae are 4m x 1m x 1m in dimension. The team did not use a recirculating aquaculture system. However, water loss through evaporation was replaced every week and the tanks were aerated regularly to maintain acceptable levels of water quality.

The team documented embryonic development, yolk resorption rate, the onset of feed and morphological characteristics of the species. The team also examined the diet composition, feeding preferences and mouth morphology of early-stage silver therapon reared in the tanks.

The researchers confirmed that the silver therapon has attributes that make it suitable for aquaculture. For instance, the species showed signs of readiness to spawn in captive conditions. The silver therapon attains sexual maturity even at a total length of 50 to 80mm. The fish also has the potential to reproduce year-round in tanks.

According to Aya, artificial breeding of silver therapon requires the use of commercially available human chorionic gonadotropin (hCG) hormone and ovaprim to induce spawning of brood fish (a ratio of one female to two males is used).

Salmon gonadotropin-releasing hormone (SGnRHa) may also be used as a spawning agent.

The hormone-treated brood fish are then transferred to spawning tanks at an ambient water temperature of 27 to 28 C.

Spawned eggs (0.43 to 0.61mm in diameter) are collected using a scoop net. The eggs are allowed to hatch in a mildly aerated plastic basin.

To improve the availability of natural food for the larvae, fertilization of the rearing water in the outdoor tanks stocked with larvae at two densities (0.4 and 0.6 larvae l-1) was performed. Larval growth and survival were improved at a stocking density of 0.4 larvae l-1.

Larvae reared in tanks containing ambient lake water grew well. However, Aya’s team found that survival rates significantly improved when leaves of the Terminalia catappa, locally known as talisay, were added to the water during the first two weeks of larval rearing.

Talisay leaves are rich in tannins and a host of organic compounds that condition the water and improve the survival and health of various aquatic species.

The hatchery protocol, just like other technologies developed by SEAFDEC/AQD, will be available for free to fish farmers interested to venture into silver therapon culture. The protocol can also support the Philippine government’s program to rejuvenate freshwater fish populations that have declined.

“It is also my plan to do the commercial production as well as the development of nursery and grow-out technology for this important fishery resource,” says Aya.