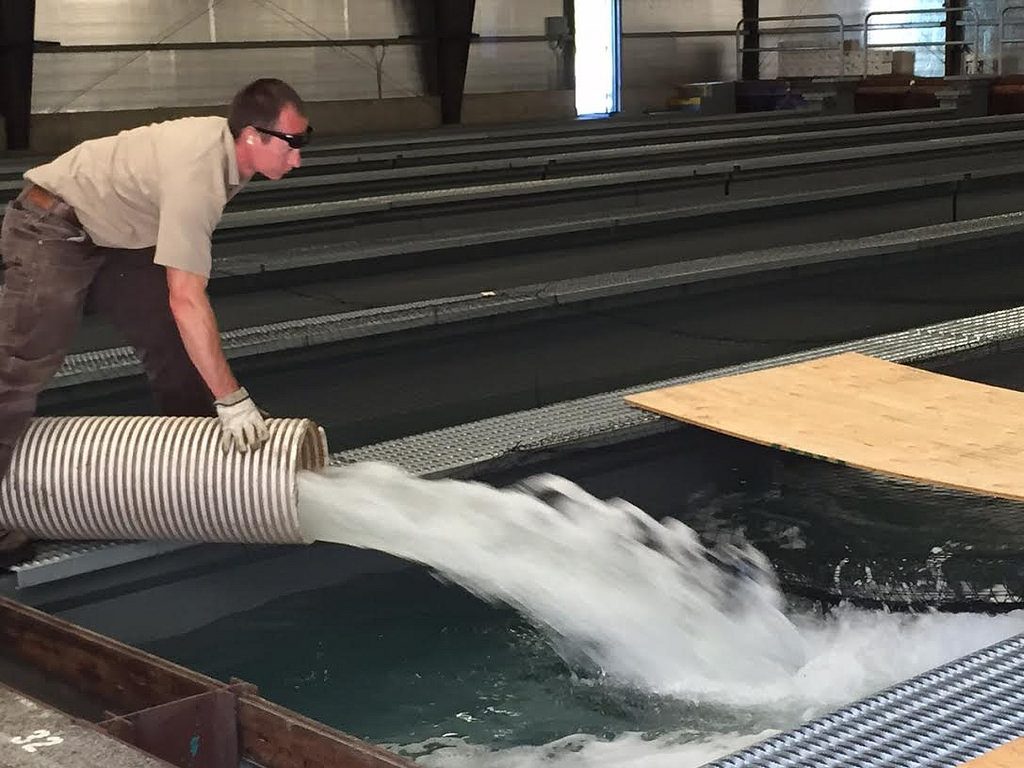 Record low snowpacks and unusually high spring and early summer temperatures created drought conditions that have taxed hatchery operations in the US Pacific Northwest and British Columbia, Canada this year.

Washington state’s governor declared a statewide drought emergency in May and twenty-two of thirty-six counties in Oregon and several areas of British Columbia were declaring drought conditions as well.

“Problems we usually run into in late September or October are happening now,” Teresa Scott, 2015 Drought Coordinator for the Washington Department of Fish and Wildlife (WDFW) told Hatchery International by email in July.

With temperatures well above normal since May, many hatcheries released smolts early in hopes that they would be en route to the ocean before river temperatures reached the critical 70F that affect salmon health.

Manny Farinas, West Region Hatchery Coordinator for Oregon Department of Fish and Wildlife, explained that while smolts had to be released some three weeks early across the northwest, survival should not be an issue.  “They were at size due to the warm water,” Farinas says.

Hatcheries face a myriad of water problems. Indeed, as of mid July over 80% of Washington’s rivers and streams were running at below 10% of normal flows.

Intakes may be too shallow for current flow levels which would require infrastructure changes.  Water intake pumps may need to be upgraded and intake channels dredged or intake weir heights modified.

Fisheries and Oceans Canada communications advisor Carrie Mishima expects that Vancouver Island hatcheries, like many across the Northwest will be sourcing well water.  Lower water levels in hatcheries may also require flow-through systems to be retrofitted to increase re-circulation of scarce water.  Outdoor operations are working with shade cloths to reduce heat.

Oregon’s Farinas pointed out that all hatchery staff practice enhanced drought protocols.  “We have a lot of great people who know a lot about taking care of fish,” echoed Rich Johnson, the US Fish and Wildlife Service (USFWS) Pacific Region Fisheries Supervisor.

Collecting broodstock is likely to be a problem.  Alternate collection sites and trucking broodstock to hatchery locations is expected to be the norm. “We will need to pursue broodstock collection pretty aggressively in order to make our goals this year and we won’t make goals in some places,” says WDFW’s Scott.

As returning salmon begin to make their way upstream to spawn, agencies are closing rivers or limiting fishing activity in an effort to reduce stress on stocks.  On BC’s Vancouver Island, home to 13 salmon hatcheries, all but two rivers in the southern half of the island have been closed to fishing since July 1st. .

Fishery managers are closing or restricting fishing on more than 30 rivers across Washington State.  Many rivers that are not closed outright will see limited fishing – midnight to 2 pm, under ‘hoot owl’ restrictions.  Most of Oregon’s rivers see hoot owl restrictions as well limited to one hour before sunrise to 2pm, while some are also closed completely.

WDFW has estimated they will need $1.2 million for fisheries drought response over the next 2 years.

USFWS Warm Springs hatchery on the Deschutes River in Oregon is an example of how hatchery staff have had to manage the temperatures.

“Our water temperatures were getting up to 76F,” says USFWS Fish Health Program Manager, Western Region, Andrew Goodwin.  “Our juvenile fish were not well.  They are the same temperature as the river.  We were seeing mortalities from Ich (white spot) and Columnaris of up to 2000 juvenile spring Chinook a day,” he explains.   “The guys were starting to call it the Hot Springs Hatchery,” quipped USFWS Supervisor Rich Johnson.

In mid July staff decided to move the 160,000 juveniles over to the Little White Salmon National Fish Hatchery.  “We could isolate them from the stock on site by putting them indoors and start to treat them,” says Goodwin.  The Little White Salmon Hatchery is some 100 miles north and west on the Columbia River.   Water temperature runs in the high 40s F, as it comes out of Washington’s Cascade Mountains.

“We started out with our one truck, but then got two more trucks and a driver from Oregon DFW,” explains Goodwin.   “We added salt and tempered the water and it worked really well.  They perked up as soon as they got into the cooler water.”

On-site chillers were only able to bring the Warm Springs adult holding pond temperatures down about 12F  to 63F,  given the high river temperatures.  “Our target is 50F” says Goodwin.  They looked at renting additional portable chillers, but rental  generators and the gas to run them was going to be too expensive.

“We have been monitoring climate data at all our hatcheries,” says Goodwin.   “We knew that this was coming, we just didn’t think it would be here this soon.”