The island state of Tasmania is arguably Australia’s aquaculture heartland. The industry generates 30% of the nation’s total seafood production of AU$2.5billion. Of this, $25m comes from the production of edible oysters. But more significantly, Tasmania produces 95% of the Pacific Oyster (Crassostrea gigas) seedstock for the domestic industry, which is spread across New South Wales, South Australia and Tasmania. Consequently the hatchery sector has found itself playing an important role in the development of better performing and disease-resistant genotypes for a good segment of the Australian Pacific oyster sector. 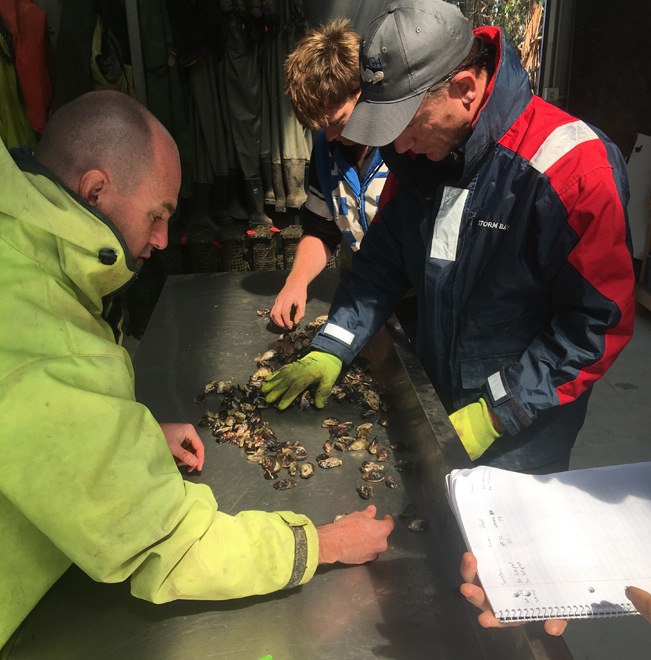 Genesis of the program

Australian Shellfish Industries (ASI) was formed and funded in 2004 by the Seafood Cooperative Research Centre (SCRC) to develop faster growing oysters. In 2008 the growers took over the program using funding from a $2.80/1,000 levy on spat. Matt Cunningham was appointed manager and the focus was directed at creating commercial strains of oysters for local conditions and markets. Uniform shell shape, better meat condition, hardiness, as well as faster growth became the benchmarks.

Matt believes these targets have been achieved. “Growth has been improved by around 20%, and shell shape has become regular. There were 24 family lines when ASI became a grower-funded operation; we now have over 80. This has allowed us to mark the performance of the progeny without losing bio-diversity,” he said.

Of the three regions, Tasmania is more representative of C. gigas’s natural habitat. Not surprisingly, selecting specific traits for regions spread over a range of habitats presents many challenges. For instance, oysters grown in the estuaries of the east coast of Australia are washed by the warm East Australian Current and face the environmental pressure of hot spots identified by CSIRO climate researchers. Such hot spots can be protracted during an El Niño event.

Oysters grown in South Australia face upwelling events from the Southern Ocean, and while it has not yet been categorically established, it appears that these events are more stressful to the oysters during a La Niña oscillation. In the South Australian case, Matt explained, the upwelling generated an instantaneous rich phytoplankton bloom, which dissipated just as quickly once the upwelling waned. He believes that the diatom bonanza lifted the animals’ metabolic rate and left them stranded when the food supply suddenly dropped off. They’ve been making some progress, but the heritability for the survival traits from these events is 0.1 (10%) and progress has been steady, but slow.

The arrival of the Pacific Oyster Mortality Syndrome (POMS) virus (Ostreid herpesvirus) in Australian waters has altered the focus of the breeding program. A Fisheries Research & Development Corporation (FRDC) report in 2011 warned that POMS had been responsible for mortalities of 80-100% in parts of Europe and New Zealand. The report (FRDC2011/043) was the result of an investigation conducted in response to the threat posed to the Australian oyster industry after the disease was discovered in two NSW estuaries in late 2010, and early 2011. The fear was that if the virus spread it would have the potential to devastate an industry worth over $100 million/year. On the strength of that it was declared a notifiable disease and a breeding program was commenced between ASI and the CSIRO to select for a POMS-resistant strain of oyster, in preparation for a wider outbreak.

Initially, because NSW was under quarantine, they were unable to bring any of the survivors back to the lab for breeding.

“It meant we had to take a fairly crude approach,” explained Matt. “When we breed from brothers and sisters of survivors, if they were from a batch that had a 40% survival, all you could hope for was for the spat to have a 40% chance of survival.”

When the inevitable occurred four years later in 2015, the selection program for resistance to POMS was given a boost. Matt and his team were able to go directly to the offspring of the family lines that carried POMS-resistant genes and augment the broodstock pool considerably.

A further bonus has been the heritability of the resistant genes. Matt said the factor of 0.4 (40%) was an outstanding score by any standard of heritability, and based on that he was reasonably hopeful that they would have family lines of broodstock that would produce spat that would have a 70% survival rate at 1-year-old by 2018.

The results of these findings are passed on to commercial hatcheries and the growers make up their own minds about which lines they want to stock.

“The system has worked well,” adds Matt. “Our job is to create a pathway from the genetic research we do to commercialization. The hatcheries have the performance data for particular lines and make their broodstock requests according to the orders they receive. There’s no extra charge; all the running costs have been covered by the levy.”

The industry’s ability to respond quickly and constructively to the POMS threat has been due in no small measure to having had ASI in place to deal with the issue. With 2015 being the warmest year on record and global temperatures for the years 2000 to 2014, being 0.69°C above the 20th Century average, and ten of the of the warmest years on record having occurred since 2000, ASI’s on-going breeding program will likely have plenty of work ahead.