Top 10 Under 40 Profiles
Sean Lovell: From finance to farming 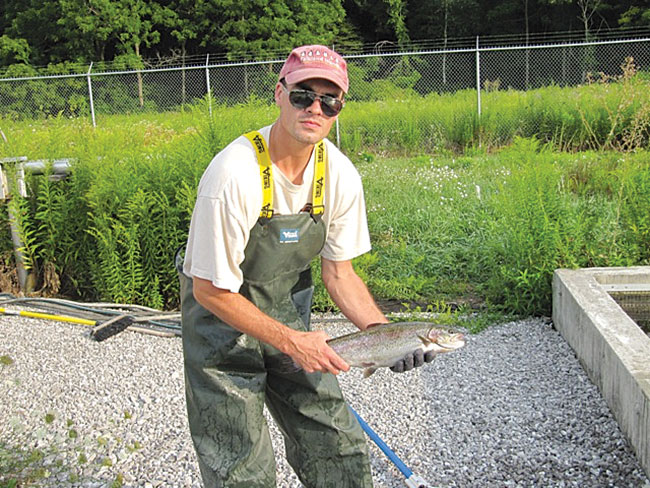 Sean Lovell owns and operates Lovell Springs Trout Farm in Vittoria, Ontario in Canada. By the way he talks about fish welfare and sustainability, no one would have guessed Lovell used to be an investment analyst with a bachelor’s degree in Finance and Physics. He taught himself how to become a fish farmer, and he wanted to do it the right way.

From the get-go he wanted to differentiate his farm by making it all natural – no medicines, hormones, chemicals or genetic manipulation. He didn’t have a hatchery at the beginning, but after years of purchasing fingerlings that he found unsatisfactory, in terms of price and quality, he decided to build his own hatchery.

“I decided to do some research into hatcheries and just thought I could do it and decided to proceed with designing my own RAS and producing my own stock. I also think it’s just cool to watch the fish grow from egg to market size,” Lovell says.

Lovell manages all aspects of the farm with one helper. The RAS system he designed for his hatchery can support up to 20,000 fingerlings, running on less than 500 watts of power.

A portion of Lovell’s fish diet comes from “natural aquatic and/or terrestrial insects.” The raceways are gravity-fed from natural springs, requiring no pump. Plants are used as water “polishers” in the effluent ditch. A barrier placed at the end of the raceways slows water down to allow for solids to plate out. The waste is gathered by vacuum once a week and used as fertilizers for surrounding fruit and vegetable farms, explains Christine Bauman, one of the fruit farmers using the waste from the fish farm.

“Instead of using a formaldehyde drip on the eggs, he picks out the dead and or infected eggs by hand. Twice a day,” Bauman writes in her nomination for Lovell.

As a business owner, Lovell understands the challenges of balancing the health of the enterprise with the welfare of the fish. He acknowledges that using technology to help with the natural process may be necessary up to a certain point. But he is a firm believer of letting nature take its course, particularly in fish farming.

“There seems to be a push for growing the ‘best’ fish possible the fastest, using as little feed or inputs as possible. To me, this is not possible or sustainable,” Lovell says. “Once you introduce a ‘chemical or mediation’ and have to use it on a regular basis, it screws up nature’s ability to take care of problems by itself. The same applies to the hatchery industry.”

This conviction is translated into how Lovell runs his farm, leading to an Ocean Wise certification for sustainable seafood production.

Lovell’s ultimate goal is to produce the “best fish” possible with a good protein value. “Also, to prove that you don’t require mass amounts of water flow to produce a good, clean product for consumption. Just a lot of elbow grease, plain and simple.”