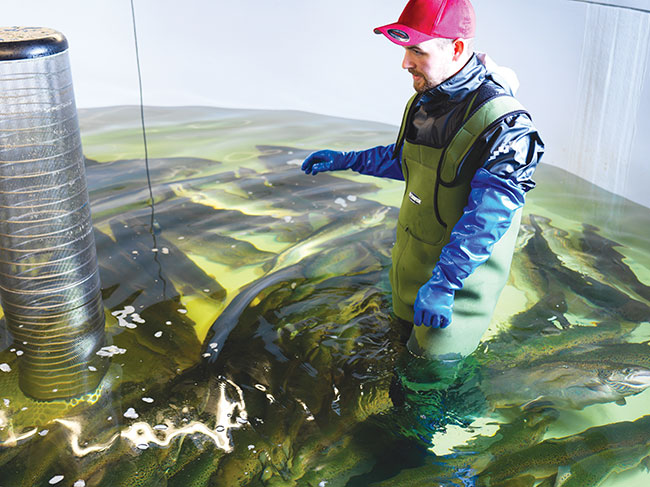 Grading of broodstock at the SalmoBreed Salten breeding station all photos: Benchmark Genetics

Most salmon farmers have to schedule their production around availability of hatchery-produced ova. The window is quite narrow as broodstock naturally spawn between autumn and winter. Then there are farmers who can start a new cycle of production any time, whole-year round. And chances are they are getting their eggs from Norway-based Benchmark Genetics, which delivers salmon eggs every week throughout the year.

The year-round spawning of broodstock leverages Benchmark’s investments in biosecure land-based broodstock production in Norway, Iceland and Chile, and expertise in the use of artificial photoperiods. “As the industry has evolved a lot the recent years, with larger RAS units for smolt and grow-out production, the producers need to have inputs of egg throughout the year to optimize their production plans. Benchmark is in a unique position to fulfill this demand, as demonstrated by growing market shares,” Birgitte Sørheim, marketing director at Benchmark Genetics, tells Hatchery International.

The company describes itself as having “unrivalled breeding and genetics expertise for the aquaculture community.” Benchmark Genetics is composed of acquired companies that are leaders in their fields and have been running breeding programs for Atlantic salmon since the early 1990s. The acquisition of SalmoBreed and StofnFiskur in 2014 paved the way for the new business area of aquaculture genetics.

The portfolio
Expansion went on for two more years, bringing shrimp and tilapia breeding programs to the portfolio.

Akvaforsk Genetics, a leading provider of technical genetics services to the global industry, was acquired in 2015. Spring Genetics, a world-leading breeding program for Nile tilapia, came with this acquisition. Akvaforsk Genetics was an offspring of the former Akvaforsk research institute, having worked on breeding and genetics for aquaculture as far back as the 70s.

The former Ceniacua shrimp program was acquired in 2016.

Benchmark Genetics Chile was established two years later. It runs a family-based breeding program for Atlantic salmon, and has recently implemented an advanced CryoLab for sperm cryopreservation of the strain’s best performing males.

At present, SalmoBreed Salten AS is the most advanced land-based production facility in the world. StofnFiskur is operating two land-based broodstock facilities in Iceland and is in position to supply the global industry with salmon ova year round.

Benchmark supplies salmon eggs to all the major salmon producing countries – Norway, U.K., The Faroes, Iceland, Chile, the U.S. and Canada. They are likewise a significant provider of ova to the fast-growing land-based aquaculture segment located in over 20 countries throughout the world.

Their sales pitch has all the key words the customer wants to hear: “Our aim is to provide our customers with the best product available. A fish with high ability to take up and use the nutrition it’s offered, a strong immune system, high resistance to diseases and a low stress level.”

The pedigreed, nucleus breeding program in the three countries are kept in high-biosecurity environments. Balanced programs ensure that each generation is selected for a combination of growth, efficiency, disease resistance and general robustness.

GE vs GM
Family links between the programs allow performance information from families to be shared among the countries, increasing the breeding programs’ effectiveness. Benchmark is the only breeding company to have this structure.

“Each breeding program and egg production facility is designed to be big enough to optimize the progress rate in significant traits and produce the number of eggs required by each region and market sector. High biosecurity and multiple programs give Benchmark customers increase the security of supply in case of market disruption by unexpected events,” Tinch says.

Benchmark does not use transgenic genetic modification – which involves transfer of genes between species – in their operations. They are researching gene editing, which results in genetic changes that could develop naturally.

“All eggs and juveniles are produced by selective breeding using genetic information to choose the best fish to be parents of the next generation. In the last decade, GE technology has been developed that makes small, precise, targeted changes in the genetic sequence that could be used to quickly improve health and welfare traits.

“Such changes could occur naturally, are indistinguishable from natural mutations and would be found at a very low frequency in fish populations,” he explains. “Benchmark Genetics believes that gene editing is different from the GM involving transgenesis that was used to define the original GMO legislation.”

He adds that discussions are taking place in a number of countries between concerned groups, including Benchmark Genetics and authorities, to prevent GE from being classified as GM, where the sequence changes could occur by natural methods. This is considered a responsible approach to using this new technology, making genetic improvements, particularly in health and welfare traits that are difficult to achieve by conventional breeding methods.

“Benchmark Genetics is collaborating with leading research groups to identify the genes that could improve disease resistance using GE. Still, we will only apply the technology when it becomes acceptable to consumers and is appropriately regulated,” he stresses. 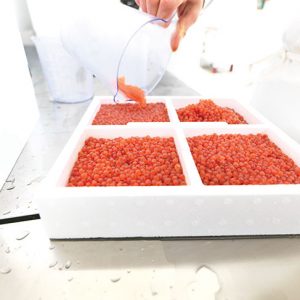 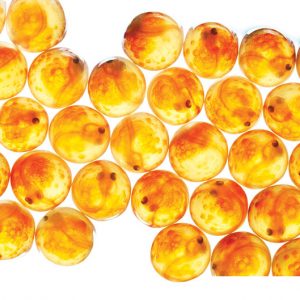 Busy year
Year 2021 is another busy year for the company. The breeding program in Chile will start commercializing locally produced salmon eggs and be available for sale in the Chilean market by the second quarter. The SagaChile strain is described as “a new, improved, and high-quality salmon strain, adapted to the conditions and challenges in Chile.”

Construction work on a new incubation centre in Iceland started in December 2020 and is projected for completion by June. It is expected to run at full capacity by the second half of the year, doubling the Iceland breeding program’s ova output from 200 million to 400 million.

On the R&D front, work continues on improving fish growth and robustness. “Benchmark is a commercial partner in a high-profile, international research collaboration with projects funded by FHF in Norway and BBSRC in U.K. involving experts in Norway, United Kingdom, USA, Canada, Sweden and Australia. These projects aim to find genes for sea lice resistance and use CRISPR Cas-9 gene editing to fight sea lice in salmon,” Sørheim says.

“These days, we are launching our BMKShrimp brand in Vietnam, Thailand, Indonesia and China, leveraging on the market insights and relations of Benchmark’s business area Advanced Animal Nutrition, the leading provider of artemia and early-stage nutrition to the global shrimp industry through the INVE brand,” Sørheim says.

Commercial trials began in 2019 in Vietnam, China and Thailand. A soft launch of sales followed the next year. There are plans to target additional countries.

Benchmark produces what the market needs. For salmon aquaculture, there are organic ova for organic production. They accept specifications for traits for tailor-made ova. There is CrossBreed, “a fusion of the best genetics between Iceland and Norway, using eggs from StofnFiskur strain, fertilized by milt from males of the SalmoBreed strain.” Through modern freezing technology, milt from SalmoBreed are frozen and stored, making CrossBreed available in off-season. For land-based salmon production, StofnFiskur has developed products with improved growth and optional QTL-IPN, a viral resistance gene.

Responding to the growing land-based aquaculture market means acquiring a new set of knowledge and practices, which Benchmark did by recently hiring two positions in the commercial team with competences on RAS technology and land-based production. These additions provide the company with in-house expertise on RAS production.

Getting their weekly salmon ova deliveries to customers all over the world goes smoothly. But they are prepared for any changes that might arise.

“We believe that the world is getting more unstable for international trading. Brexit is an excellent example of this and the political shift in the U.S. towards more nationalism. So far, we have not experienced any issues with exports to the U.K. post-Brexit. However, we are continuously keeping a keen eye on the situation and are in contact with authorities, regulatory bodies and trade organizations to be prepared for any possible actions,”  Sørheim says.