The Apache trout is named for the people and the place that are intertwined with one another. The yellow trout ornamented with black spots, white-tipped fins, and a raccoon-like eye mask lives naturally only in the headwaters of the White, Black, and Little Colorado rivers near the New Mexico border. These waters harbor some of the last remaining populations of this pretty trout found nowhere else but in streams that rim the White Mountains of Arizona. 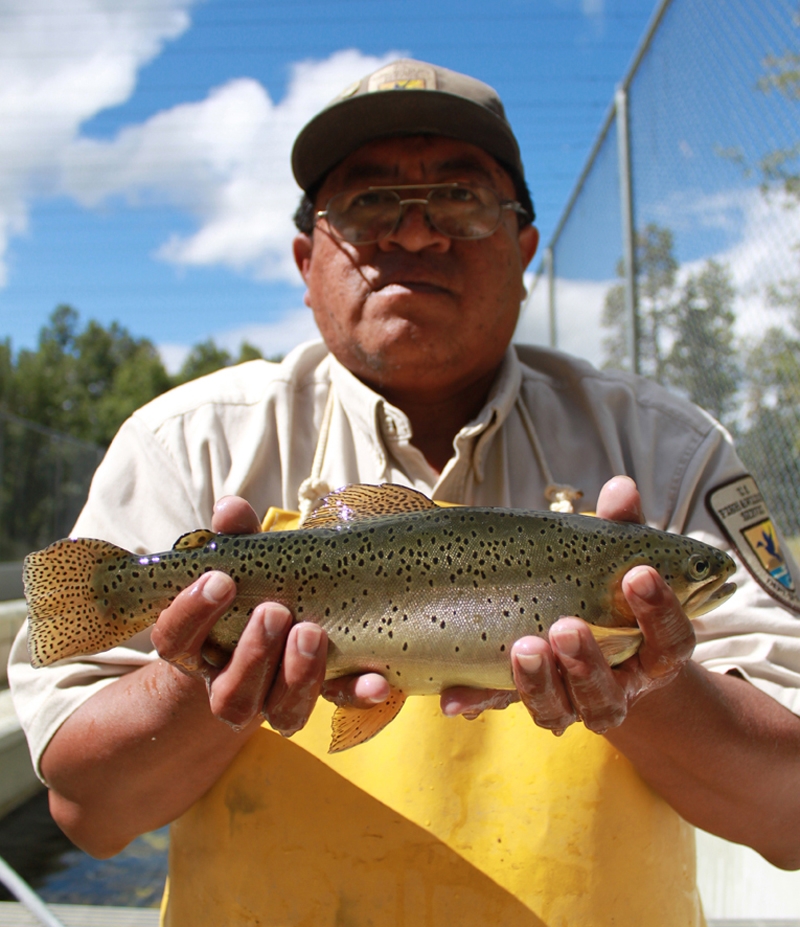 The fish has been well known to anglers for some time. Local farmers and ranchers made summertime forays into the high country to catch them. One correspondent, simply “J.H.” from Show Low, Arizona, wrote in a July 1886 issue of the St. John’s Herald: “I speak truly when I say it was the most enjoyable period of my life.” He recounted how he and his pals caught scads of Apache trout from the White River during a prolonged summer outing. The sport fishery was renowned.

The Apache trout had become known to science a few years earlier in 1873, when it was collected by members of the U.S. Geographical Survey, and wrongly identified it as a Colorado River cutthroat trout. Other scientists collected it from the White Mountains from time to time, but it wasn’t until a century later in 1972 that the fish was properly recognized as a unique species and assigned its current scientific- (Oncorhynchus apache) and common names. A year later it was placed on the endangered species list.

Places everywhere have their scars, and the White Mountains are no exception. The loss of habitat from excessive timbering and grazing and the introduction of non-native trout species were detrimental to the native Apache trout. High sedimentation during the spring run-off affected trout reproduction; fine sediments clogged porous gravel beds where oxygen-rich water should percolate over incubating eggs.

Over the last 75 years, through the actions of the White Mountain Apache Tribe, followed by work with the U.S. Fish and Wildlife Service (Service), U.S. Forest Service, and Arizona Game and Fish Department, Apache trout populations have rallied. The future looks sunny for the species; it could be the first sport fish to be recovered and removed from federal threatened or endangered species protection.

Conservation work continues. Cattle have been fenced out of select Apache trout streams within the Apache-Sitgreaves National Forest and along streams within the Fort Apache Indian Reservation. Non-native sport fishes are no longer stocked near Apache trout waters. Alchesay-Williams Creek National Fish Hatchery, located on the reservation, continues to raise Apache trout for sport fishing. Apache trout from the federal fisheries facility are stocked on the reservation and they are shared with the Arizona Game and Fish Department to be stocked in neighboring national forest waters. Many streams are open to anglers.

The Service’s Arizona Fish and Wildlife Conservation Office (FWCO) biologists remain shin-deep in Apache trout work, striving toward that goal of recovering the threatened species. They expend a great deal of energy removing non-native brown trout and brook trout from Apache trout waters. They accomplish this with backpack-mounted electrofishing gear where the unwanted fish are stunned and netted from high mountain streams.

A new technology known as environmental DNA (eDNA) guides their work. Fish shed skin cells and of course eliminate bodily waste into the water, which then contains the animal’s DNA that can be detected in the water. Biologists from the FWCO and tribe collect stream water from several sites over long reaches, and pass the water through filters that are analyzed by U.S. Forest Service’s Rocky Mountain Research Station. These lab results then identify those stream sections that contain the unwanted non-native trout.

At present, Apache trout exists in 28 populations and swim in 170 miles of streams. The lot of Apache trout has changed significantly. In a relatively brief period the species has emerged from anonymity and mistaken identity to the point when the White Mountain Apache Tribe stepped up to protect their trout. It’s now the official state fish of Arizona and a favorite among anglers.