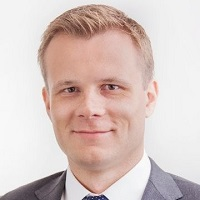 Schaug-Pettersen fills the post vacated by Håkon André Berg. Berg, who was hired by the company last year, has taken the post of chief executive officer.

“I am very pleased to include Trond Håkon in the management team of Salmon Evolution,” said Berg. “He has a broad background from both the capital markets and the seafood industry, and I am sure that he will add significant value to our company from day one.”

“I am excited to join the Salmon Evolution team and I am looking forward to taking part in the development of a leading global salmon player,” said Schaug-Pettersen.

Schaug-Pettersen has led the finance and business development thrust of Hofseth since 2016.

Prior to that, he worked for nine years as a corporate finance professional for Swedbank Securities, one of the leading banks in the Nordic and Baltic regions.

Earlier in May, Salmon Evolution began the first of three phases of the firm’s massive fish farm project in Indre Harøy in Hustadvik.

The first construction stage will provide the capacity to produce 9,000 tons of fish per year. Production will rise to 36,000 tons when the whole project is completed, according to a press release from the company.