Features
Salmon and steelhead at home in Nimbus Hatchery

California hatchery continues to rejuvenate Chinook salmon and steelhead populations in American River affected by construction of Nimbus Dam in 1955.

“The hatchery was built by the United States Bureau of Reclamation (USBR) in 1955 and is operated by the California Department of Fish and Wildlife (CDFW),” said Jason Julienne, senior environmental scientist at the CDFW – North Central Region Hatcheries.

The purpose of the hatchery program is to mitigate for salmon and steelhead spawning and rearing habitat eliminated due to construction of Nimbus Dam and, secondarily, to support in-river and ocean fisheries.

The purpose
There was a reason the hatchery was first “hatched”.

The Nimbus Fish Hatchery traps, spawns, and rears Central Valley fall-run Chinook salmon (Oncorhynchus tshawytscha), species of concern, and American River winter-run steelhead trout (Oncorhynchus mykiss) for the USBR to help fulfill mitigation requirements for the loss of spawning and rearing habitat due to construction of the Nimbus Dam.

The Fish and Wildlife Coordination Act report of 1953 requires the USBR to compensate for the loss of 72 per cent of the historic Chinook salmon habitat and 100 per cent of the historic steelhead trout habitat in the Lower American River as a result of the construction of Nimbus Dam. The Bureau equated adult returns estimated at 26,144 Chinook salmon and 1,287 steelhead trout. To help the USBR meet these mitigation goals, the hatchery production goals are set at an annual collection of eight million fall-run Chinook salmon eggs and the release of four million smolts, and annual collection of 1.2 million steelhead eggs and release of 430,000 yearling steelhead trout.

A sustainable operation
The Nimbus Fish Hatchery is an approximately eight-acre facility located adjacent to the lower American River, approximately 15 miles east of the City of Sacramento, and downstream from Nimbus Dam, at the river’s 35 kilometres (river’s 22 miles). The facility consists of six outdoor rearing ponds, or raceways, which are 400 feet long and two hatchery buildings for egg collection, incubation, and fry rearing, and several outbuildings for storing equipment and supplies.

The incubation periods vary with the species.

The ominous drought plays an increasingly uneasy role in the operation of hatcheries and the future of fish growth.

During the adult fall-run Chinook salmon migration and holding period, warm water temperatures are suggested to delay adult migration and maturation. This disrupts the timing and availability of mature Chinook salmon to the hatchery for egg collections and data suggests this shifts the spawn timing of natural area spawning fish.

“Drought also changes how eggs are incubated at the Nimbus Hatchery,” Julienne said. “In the early fall months during drought years, the hatchery uses water chiller units to cool the water supplied to egg incubation jars in an effort to maintain water temperatures at or below 58 F. Without the use of these chiller units, the hatchery would lose most, if not all, of the eggs collected in the early fall months until ambient temperatures cool source water temperatures to levels acceptable to Chinook salmon egg incubation.” 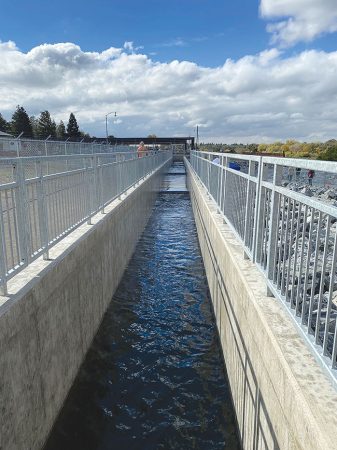 Nimbus Fish Hatchery’s fish ladder allows the hatchery to access anadromous fish returning to their natural waters that will be used as broodstock production of those species. Photos: California Department of Fish and Wildlife

Climbing the fish ladder
The hatchery’s fish ladder is a crowd pleaser with the visiting public.

The USBR designed, funded, and built a new fish ladder for the Nimbus Fish Hatchery. The ladder construction began in the summer of 2019 and was completed in the summer of 2021. Originating near the base of the Nimbus Dam, it is approximately 0.4 miles long and follows the south bank of the Lower American River downstream towards the Nimbus Fish Hatchery. Steps and long flume sections are used to gain elevation from the river to the hatchery building where adult Chinook salmon and steelhead are collected as broodstock for hatchery production.

Fish ladders are a common and often essential component of anadromous fish production hatcheries. It allows the hatchery access to anadromous fish, in this case fall-run Chinook salmon and steelhead trout, returning to their natal waters that will be used as broodstock in the production of those species. Fish ascend the ladder and enter a trap at the top where hatchery staff bring them into the hatchery spawning building where they are spawned to meet production goals.

The hatchery’s ladder will be used by both fall-run Chinook salmon and steelhead trout, but across the state there are hatcheries that use ladders to aide in the broodstock collection of other species such as Coho salmon and Lahontan cutthroat trout.

Mitigating environmental impacts
“The biggest challenge facing California’s state hatchery system is without question, climate change,” Julienne reflected. “These impacts are significant and are affecting hatcheries now. Unsuitably high temperatures have forced the evacuation of fish from two of the state’s largest trout production hatcheries, and two of its salmon and steelhead hatcheries.”

The state has spent millions of dollars installing chillers in facilities that had never had water temperature issues over the previous 50 years. Throughout the state, hatchery operators have had to modify spring and summer stocking plans, including delayed fish releases until cooler winter temperatures returned.

Wildfires have caused staff evacuations from hatcheries over a half dozen times in the last three years due to encroaching fires and unsafe air quality, resulting in weeks of work stoppages. Over a dozen hatcheries, including two key salmon hatcheries and both primary broodstock hatcheries for rainbow trout are in designated extreme fire risk areas.

“The Department of Fish and Wildlife sees recirculating aquaculture systems (RAS) as a critical component to building climate change resilience in the California hatchery program,” said Jay Rowan, CDFW fisheries branch chief and former hatchery program manager. “In fact, RAS have been installed to provide a temporary safe haven for Endangered Species Act- (ESA) or California Endangered Species Act- (CESA) listed and other important species that would likely perish if left in the wild during recent droughts. RAS affords the ability to chill large volumes of water which will be critical to rearing fish at hatcheries where we occasionally see unsuitable water temperatures.

“These improvements will allow us to diversify and expand our broodstock and egg production capacity into existing hatcheries that don’t currently have cold enough water to induce egg and milt production.”

The state has recently received funding allocations from the legislature to implement hatchery modernization projects, employing RAS technology and other tools aimed at building climate resilience, and meeting its public trust responsibilities.