Nikolsk Hatchery in the country keeping light on despite challenges 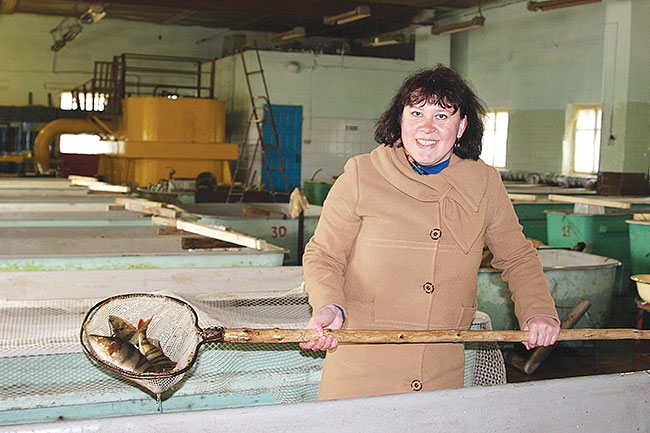 Novgorod-based Nikolsk Hatchery is the oldest hatchery in Russia and one of the oldest in Europe. The facility is traditionally considered as a cornerstone of Russian fish farming science and a great-grandparent of all hatcheries in the country. These days the hatchery is working hard to keep up with the times, according to Elena Stepanova, director of the Nikolsk hatchery.

The history of the hatchery is tightly linked to a rich Russian landowner named Vrassky, who began an experiment on his property in the Novgorod Oblast, 300 miles from St. Petersburg, breeding eelpout (Lota lota), trout (Salmo gairdneri) and perch (Perca fluviatilis L.) back in the 1850s.

After several years of studies Vrassky discovered the so-called “dry method” for fertilizing eggs of river perch with the sperm of the species. Discovering that his method – now known in Russia as the Vrassky method – works in a similar way for all fish species, he obtained a grant from the government of the Russian Empire to build the first hatchery in the country designed to hold over two million eggs of different species, including young bream (Gustera blicca bjoerkna) and carp (Cyprinus carpio).

Vrassky died in 1863 at the age of 33, only three years after launching his hatchery. The hatchery went through ups and downs the following years, but it continued operations up until World War II, when it was completely destroyed. The hatchery was rebuilt in 1946 and never stopped operating since.

After being completely destroyed during World War II, the Nikolsk Hatchery was rebuilt in 1946 and has been operating since.

As the oldest hatchery in Russia, Nikolsk Hatchery traces its roots to a rich land owner named Vrassky, who pioneered the “dry method” of fertilizing eggs of river perch.

Broodstock in demand
“Today, we produce broodstock, to be more specific young-of-the-year fish. We are catching them from our ponds every year in October. Their average length is 15 cm, and the average weight is 15 grams. We are selling this broodstock to fish farmers for stocking purposes,” says Stepanova.

With the Russian government’s policy for compensation stocking, in which companies with operations that have a negative impact on the environment – such as when building pipelines, bridges and roads – must engage in stocking fish species in nearby lakes and rivers, most of the fish reared at the Nikolsk hatchery are sold to these corporations, Stepanova adds.

“In every single case, [the government agencies] estimate what damage they [these companies] have to compensate for. They then turn to companies like ours, and we stock state-owned ponds for them,” she explains.

The government policy in this area is well-designed. In every single case, the compensation stocking is taking place under scientific supervision. For every river and lake, calculations are being made about what fish species they lack and stock them accordingly.

“Our broodstock is being used in Leningrad, Pskov, Smolensk, Vologod and Novgorod regions,” Stepanova says.

Despite these significant efforts, however, the environmental situation in the Russian northwest keeps getting worse.

“Without the stocking campaigns I don’t even know how much fish we would have in our waters. There are numerous different factors behind that, including climate issues. The other problem is uncontrolled amateur fishery. There are so many people wanting to have fish free of charge, they are not limited by anything, and nobody knows how much they can catch at the end of the day,” she notes.

Stepanova adds the fishermen usually use trolling – a method of fishing where or more fishing lines with lures or bait fish are slowly dragged through the water behind a moving boat. “These fishermen are catching everything, including the fish just passing through the first spawning. It hurts, because we see that our work appears to be fruitless.”

Vrassky legacy
Nikolsk hatchery is managing its broodstock using the method developed by Vrassky more than 150 years ago – although the technology has been refined over time.

“We use dry method for fertilizing eggs. We fertilize eggs from our own breeding stock and hatching them. If we talk about species spawning in autumn, than the hatching takes five months, commonly from November and until the end of April. And if we talk about the species spawning in spring, then the time of hatching is limited to only three to 10 days. These are species like pike (Esox), sander (Stizostedion) and carp,” Stepanova explains.

“We are doing hatching in the hatchery workshop in the Weiss apparatuses; we have a day-and-night duty. This is very important, because we could not allow the water flows to stop, because in that case the caviar would die. It must remain in this fluidized state with the water constantly passing by,” she adds.

Nikolsk hatchery is trying to rely on its own broodstock whenever possible, but the company runs 50 ponds covering 102 hectares, so sourcing eggs from outside the hatchery is necessary at times.

Big range
Nikolsk hatchery is also one of the few companies that are allowed by the Russian ecological authorities to catch fish in the country’s rivers during the spawning season.

“We are collecting reproductive products from wild fish, including milt and caviar, fertilize with dry method, getting caviar and then proceeding to hatching. We may sell young-of-the-year fish or fish fry,” Stepanova says.

The hatchery is running cascade ponds and a special attention is put into feeding, according to Stepanova.

“We do not use any artificial feed, opting for natural feeding. All fish fry up to five grams are being fed with zooplankton, and only then they are transferred to some specialized feeding. Phytivorous fish species are transferred to vegetable diet, while predatory fish eat ones of their kinds,” Stepanova explained.

Nikolsk hatchery stimulates the growth of zooplankton in a natural way, using air-dry grass, manure, wood sticks and so on. To feed predatory fish the company uses fry of carp or crucian (Carassius carassius).

Although, the hatchery is breeding many fish species – with the ability to produce twice the amount it used to prodice – and is located in a well-populated European part of the country, weak demand remains a problem for the hatchery.

BUSINESS OPPORTUNITIES
There is no doubt that the Russian aquaculture industry is on the rise and the hatchery sector has a great future, according to Stepanova.

“Of course, we are not working with the species that are in the highest demand among the Russian fish farmers, which are trout or sturgeon (Acipenser), but nevertheless we have also something to offer to fish farmers – for example, carp,” Stepanova says.

There are many new fish farms being built in the country. Some farmers rent existing ponds, while others purchase land with open pits to fill them with water and begin breeding fish – this way of opening a fish farm has become rather popular in Russia in the last few years, Stepanova says.

“All farms need broodstock. Those growing predator fish purchase some fry as feed. We also see a growing demand for eelpout, because this fish has an ability to clean some water bodies,” she adds.