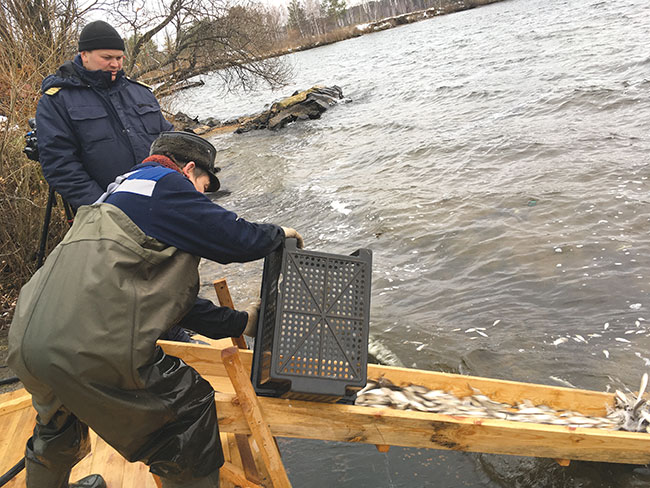 Fish stocking at cooling ponds near nuclear plants is a common practice in Russia.

Several new Russian nuclear plants have begun growing fish in their cooling ponds, despite the continuing concerns voiced by environmentalists.

In 2020, the Balakovo plant released 1,238 carp fingerlings into its cooling pond. The fish must be grown to marketable size and have a proper and healthy appearance, the plant management said.

The cooling pond at nuclear plants is a technical reservoir designed for cooling water from the nuclear power plant. The pond’s heated water is used to cool the steam turbine equipment and pipelines of the nuclear plant’s secondary circuit.

“The radioactive water remains in a closed primary circuit, and the water in the cooling pond is clean and corresponds to drinking indicators,” the Balakovo plant said in a statement.

Russia’s state nuclear corporation Rosatom – the leader of the world’s nuclear market – is currently operating 11 nuclear plants in Russia, and several more are currently under construction. Numerous plants run fish farms growing fish of various sizes in the cooling ponds, with the biggest one is believed to be at the Beloyarsk plant with a production capacity of 60 tonnes of marketable fish per year.

Stocking of cooling ponds is a common practice for nuclear power plants in Russia. The pond’s warm water causes an intensive growth of algae and mollusks reproduction, which may disrupt the water intake pump operation, clogging the protective systems of the plant’s technical water supply. Most scientists believe the fish from nuclear plants are safe for consumption.

Tritium content
The main problem with marketable fish and broodstock from the nuclear plants’ cooling ponds is that it may be contaminated with dangerous radionuclide tritium, the Russian independent newspaper Versia reported.

As explained by a Russian expert on nuclear energy problems, Alexei Shchukin tritium is the most dangerous radionuclide for humans today – its half-life is 12.3 years, and it is formed in large quantities when ordinary water is irradiated in reactors.

“Tritium is practically impossible to purify. Its danger lies primarily in the fact that it easily migrates, being included in biological chains. You cannot get rid of it even when processing radioactive waste – when water evaporates, it flies along with the steam,” Shchukin said.

Experts point out that the fish becomes the final absorber of radionuclides released into the environment.

“As for the production of tritium at nuclear power plants, it is formed in proportion to the generation of electricity itself,” said the Russian nuclear physicist Lev Maksimov, explaining that fish contaminated with tritium is likely to stay contaminated until it is fully grown, and is expected to remain dangerous for consumers.

“Decaying, tritium turns into helium while emitting rather intense beta radiation. Tritium can be a serious health hazard. After all, tritium, being an isotope of hydrogen, behaves chemically in the same way as hydrogen and therefore is able to replace it in all compounds with oxygen, sulfur, nitrogen, easily penetrating the protoplasm of any cell. In this case, beta radiation emitted by tritium can damage the genetic apparatus of cells,” Maksimov said.