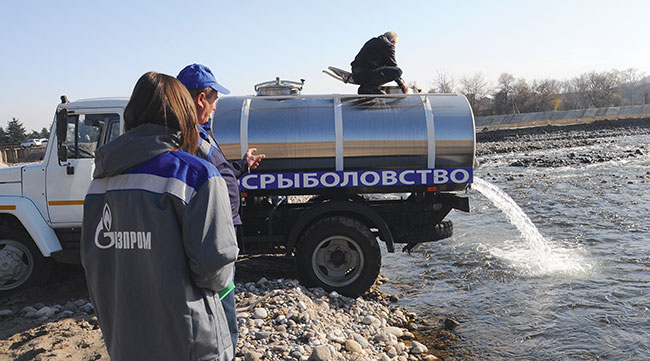 Oil and gas producers in the Russian Far East have to stop giving money to hatcheries to breed pelyad (Coregonus peled), since there are no longer any problems with the population of this fish species, said Marat Abrakhmanov, member of the Parliament of the Yamal Nenets Autonomous District, during a parliament meeting.

The problem, according to Russian federal agency of fisheries Rosrybolovstvo, is poaching – where fish released from hatcheries are ending up on poachers’ nets.

In 2016, the Russian government obligated all industrial companies in the country engaged in business considered as potentially harmful to the environment to spend money on projects that protect the environment, including restoring fish populations in some regions.

Over the past several years, oil and gas manufacturers in the Russian Far East were providing money to hatcheries to produce pelyad fingerlings, Abrakhmanov said. This is cheaper compared to breeding whitefish (Coregonus muksun) or Siberian white salmon (Stenodus leucichthys) – the species that are actually endangered, Abrakhmanov added.

There is a broad range of fish species considered endangered. In particular, the population of the Russian sturgeon (Acipenser gueldenstaedti) in the Ugra River was around 300,000 back in the 60s, but it has been depleted to only 50,000 units today. The situation is very similar for the whitefish, said Ruslan Romancyuk, director of the ecological control department of the Ugra River.

The regional authorities in Yamal Nenets Autonomous District is negotiating with the industrial companies on the terms of a new agreement that would obligate businesses to breed certain fish species, Abrakhmanov said.

Oil and gas companies have only been providing money for hatcheries to produce pelyad fingerlings, instead of the more endangered whitefish or Siberian white salmon.

POACHING PROBLEM
The government agencies warn that these efforts could be in vain. Russian federal agency of fisheries Rosrybolovstvo recently made a statement saying numerous fish species are really endangered in the Russian Far East as well as in the Arctic. All pelyad released by the local hatcheries that received money from oil and gas companies end up in the poachers’ nets, Rosrybolovstvo said.

The only meaningful solution is to introduce a complete ban on fishing in this part of the country, Rosrybolovstvo said. During recent inspections, the local law enforcement agencies found 16,500 units of whitefish and round-nosed whitefish (Coregonus nasus) illegally caught in Far East, which is believed to be an all-time record. This is clearly evidence that poachers expand their operations together with the hatcheries, according to Rosrybolovstvo.

Although the problem of poachers must be addressed, there is a need to build at least one more hatchery in the Yamal Nenets Autonomous District, Abrakhmanov said. This is because the capacity of the Soba Hatchery, which is the biggest one in this part of the country, as well as other hatcheries are clearly not enough to restore fish populations in the local rivers, Abrakhmanov added.

Oil and gas companies were not available for comment, but Russian company Alrosa, one of the biggest diamond producers in the world, said that in June 2019, alone the company released 1.6 million units of whitefish fingerlings in the rivers of the Yakutia Republic. In 2020, the company plans to begin releasing round-nosed whitefish and Russian sturgeon as well, the company added.