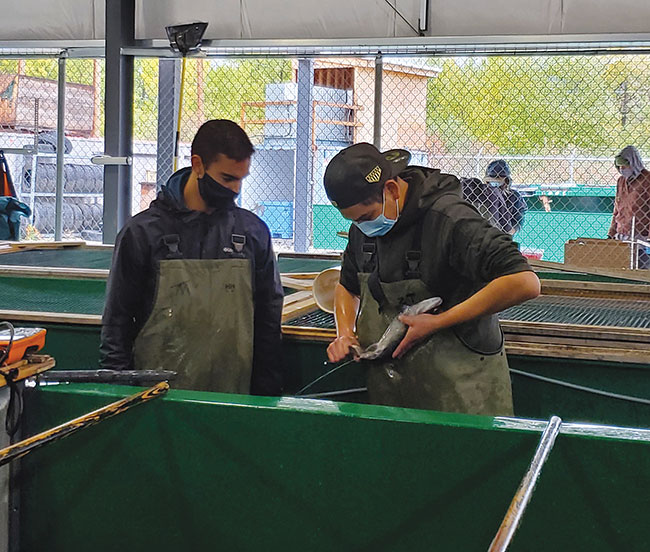 Many of the hatchery staff are young people from the Syilx community. Photo: kł CPELK stim Hatchery

Water is a sacred element to the Syilx people.

They believe that the Okanagan River holds within it a sacred connection to the stories of their ancestry, their descendants and their land. So when Sockeye salmon finally returned to Okanagan Lake in British Columbia, Canada, for the first time in more than 50 years, more than a few tears were shed for this historic moment.

“We had two elders at the experimental release (in 2014). One was a knowledge keeper for the water,” says Ryan Benson, biologist for the Okanagan Nation Alliance (ONA). “She conducted the prayers and ceremony, then they both sang a song as the fish were released.”

Six years later, the first of the released fry have made their way back to the lake as adult fish – the first sign of hope in restoring the region’s salmon populations.

The rescue mission
The Okanagan River is a tributary to the larger Columbia River Basin which is home to Chinook, Sockeye, Coho, Chum and steelhead. In the late 1990s, two Columbia Sockeye populations (Okanagan and Wenatchee) began to dwindle to less than 2,000 returning to spawn. This sounded the alarm for the ONA Fisheries Comission to launch an effort to rescue the species from the brink of extinction.

“This is from decades and decades of destroying the habitat and overfishing out in the ocean and down in the Colombia (River),” says Benson. “And the elders and a lot of the leadership from Okanagan nation bands started to express concern.”

In 2003, the ONA began a 12-year experiment that brought together consultants, Fisheries and Oceans Canada (DFO) scientists and ONA biologists for a pilot study to restore the Columbia Sockeye to the Okanagan region. Benson coordinates the different groups involved in the Sockeye Re-introduction Program.

After 10 years of scoping, studying and risk assessment, a new hatchery in Westbank, B.C. was established in 2013 which marked what Benson calls the program’s “production mode.”

Last October, the program saw the first of the returning adults from its 2017 release thanks to a man-made fish ladder that was activated in the Penticton dam the year before. On top of this success, November also marked a record breaking milestone of 38,000 Sockeye fish returning to Skaha Lake, which is located along the course of the Okanagan River.

“Around that creek was absolutely red with Sockeye,” says Norm Johnson, hatchery manager. “There were families down on the riverbank and the elders were crying as they saw it because it reminded them of the old days… Kids are seeing what the elders had told them before about the rivers used to run red and all of a sudden, they’re running red again.”

These first signs of the re-introduction program’s success are turning heads among other enhancement and restoration programs. Lessons learned from ONA’s model could be the key to saving the diminishing fish populations along the west coast.

Inside the hatchery
The kł cp̓əlk̓ stim̓ Hatchery (which roughly translates to “to cause to come back”) is a 25,000-square-foot facility with the capacity to rear eight million eggs. Currently, it is equipped to handle up to five million eggs from broodstock management until fry release.

Rearing and feeding of the fry is done in 27 fiberglass raceways, each with a capacity for 275,000 fry. Staff will hand-feed the fry to ensure that minimal feed is wasted and water quality is maintained. The facility regularly achieves 95-per-cent survival rate from egg to fry.

Johnson’s role as hatchery manager is a seven-days-a-week, 8-to-5 job. But as the success of the program began to spread, his work expanded outward.

“We’re consulting with several First Nations around B.C. and into the Yukon,” says Johnson. “We probably have 20 that have asked us for information packages and we are currently working with six. The Upper Fraser is just in such dire need of fish enhancement and conservation aquaculture right now.”

Johnson credits some of the restoration program’s greatest successes to the local First Nations communities. With the exception of himself and the assistant manager, the hatchery staff are made up of local young people from the Syilx community.

Johnson developed his own fish culture training program to educate the young workers. It is a year and a half of training modules, videos, presentations and hands-on work. Every month, they conduct tests to ensure that they follow the hatchery’s regimented routine.

“When we first started this, some people said that First Nations cannot run a large hatchery successfully, and that we should turn it over to the province or the DFO,” says Johnson. “We’ve proven that the best commitment you can get is some person whose family has lived on that river for millennia. And if there’s a mistake, they have to go home and explain that to grandma.”

The Spring chinook salmon (known to the Syilx as “n’titxw”) is one of the four food chiefs. Not only is the animal a main food source for the communities, it is seen as their relative. Every fall, the community gathers for a three-day salmon feast to honour the traditions of the animal and the sacredness of the river.

The hatchery is located across the street from the En’owkin Centre, a post-secondary education and cultural hub for the Syilx people. Traditional knowledge keepers from the community regularly visit the hatchery to share their knowledge with the staff and educate them on the traditions around the salmon and the sacredness of the river.

“Some of our young people haven’t seen some of these ceremonies before because the fish just haven’t been there,” Johnson explains. “So we have someone like Richard Armstrong and other elders that are knowledge keepers to pass on the information, like the very first fish that comes back, how you treat it, and how you handle it, and the offerings you have to make.”

Although Johnson does not have his own Indigenous roots, he has lived and worked in First Nations fisheries throughout his career. Before coming to kł cp̓əlk̓ stim̓ Hatchery, Johnson was fisheries program manager for the Council of the Haida Nation in Haida Gwaii, B.C.

Benson traces his own Indigenous roots to the the Blackfoot Confederacy in Alberta and Montana, but his wife and children are members of the Lower Similkameen Indian Band. As family members in the ONA, Benson places a personal connection to his work.

United effort
Benson emphasizes that ONA’s Sockeye Re-introduction Program is not only a result of cooperation and collaboration by the Syilx community and leadership, but also the federal and provincial governments.

ONA is a member of the Canadian Okanagan Basin Technical Working Group. It works with B.C.’s Ministry of Forests, Lands and Natural Resource Operations and Rural Development (FLNRORD) and Fisheries and Oceans Canada’s science and management divisions.

Benson says a major part of his role in stock assessment and data analaysis is to maintain communications with all interested parties. “We want to be able to say, this is where your money is being spent,” he explains.

“Without the utility districts and funding there’s no way this ever would have got off the ground,” says Benson. “They’re pretty much 99 per cent of our operations. They funded the building of the hatchery and even 12 years before the hatchery was actually built, they were funding all the monitoring and evaluation.”

The program is mainly funded by the Grant and Chelan Public Utility Districts in Washington State.

Production mode
With the program’s production mode well under way, the Sockeye populations in the Okanagan region become more and more robust each year.

Benson and his team of ONA biologists also continue to study the food web in the lake and what the fish could eat, whether they were getting enough food and looks at other species in the lake.

“Over time, as we go out there, the data set we have is probably one of the best, richest ones in North America,” says Benson. “We’re preparing to soon publish a 16-year synthesis up to date.”

“Science is the basis of where we go. We’re not just winging it,” adds Johnson.