Features
Return of the flat oyster in Victoria 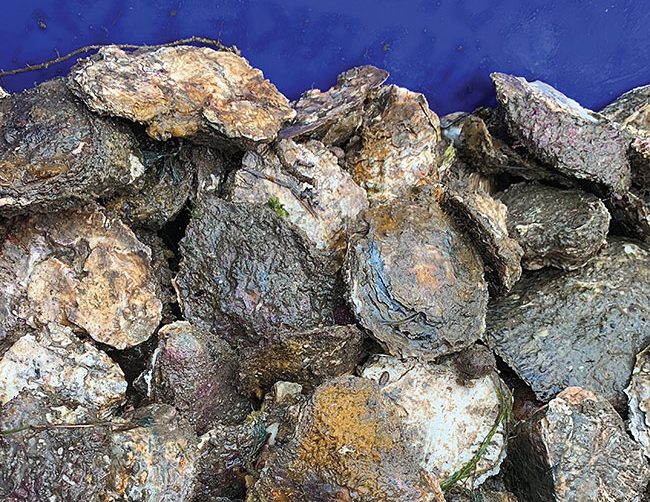 On the arrival of Europeans, the substrates of Port Phillip and Westernport were so densely populated with flat oysters, they were literally mined for their lime to help build the colony.  Today, they’re being bred to re-establish the once vast reefs, and as a commercial crop for the dinner plate.

Steve Cooper, the founder of Flinders Oyster Company (FOC) said the Ostrea angasi shared the same environmental position as the famous belon oyster of France (O. edulis) and he is confident that he can create a local oyster industry based on the product’s universal market acceptance. He said the market enquiry he’s had so far would top 30 million dozen without including any exports.

The operation is divided into two sections: FOC and the Phillip Island Oyster Hatchery.  The hatchery has the algal capacity to grow 50 million spat to 4 mm, but has the space to increase that threefold.

Conveniently located in the channel that separates the Island from the mainland, the tidal flow from Bass Strait ensures a reliable flow of healthy oceanic waters for the hatchery.  The water is aged for 24 hours, sterilized and pasteurized before the nutrients are added in the algae room. Four different algal species are used in varying proportions during the different life stages of growth before the larvae metamorphose into spat. Another range of micro algae are employed in the spat rearing tanks before they’re taken out to sea.

“We’ve developed and designed a specific system for growing angasi oysters. As a sub tidal oyster, they’re a very different proposition to the other species farmed in Australia – the Pacific and the Sydney rock. With the robust cages we’ve designed, we’re able to stock in high energy waters and being submerged, the oysters don’t lose that low tide feeding period,” says Cooper.

Keeping the environment clean is paramount, he adds. The mechanical system is hydraulically driven.  The cages are lifted from the water, the oysters are cleaned and graded and any fouling is removed from the cages. They’re out of the water for a very short period of time.

“Our system allows us to service three leases per crew. That’s a very economical use of manpower and equipment,” says Cooper. 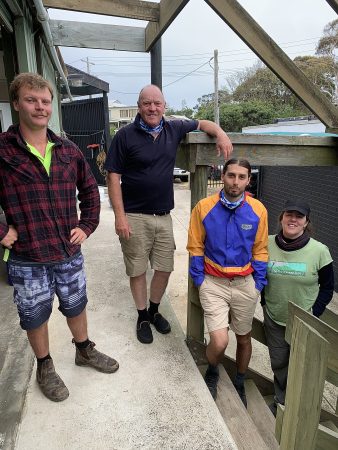 Steve Cooper (2nd from the left) and some of the crew down at Phillip Island Oyster Hatchery. (Photo: John Mosig)

The hatchery mainly spawns from wild stock but this season, Cooper says they’ve been able to incorporate a few selected breeders from their own pool.  Normal spawning is in November which means the spat are stocked on the leases in January to February and are ready for harvest in 24 to 30 months.

The oysters spawn when the water temperature reaches 18o C and the larval stage takes 20 to 22 days at which stage the oysters are 300µm.  The spat rearing stage to 4mm takes another six weeks.  During this phase, the spat are graded into growth rate cohorts.

A cohort of 1,600 are then stocked into one cage of the ladder.  When they double in size they’re graded, split and stocked in two cages.  This splitting process continues until all six cages have 20 dozen oysters in them.

Cooper is working towards conditioning selected family lines so spawning can commence mid-winter and the spat can be stocked in the early spring. “This will give us two full summers and we can reduce our growing cycle to 18-24 months and catch the market gap when the rock oysters have spawned and not at their prime,” he says.

“This also opens the door to producing a triploid oyster,” says Cooper

Cooper believes that with some solid science behind their breeding, oyster farming can become a major aquaculture industry  in the region. It could see the return of the indigenous angasi as a mainstay of the local seafood markets.

Cooper had an interesting slant on CO2 sequestration and nutrient stripping, too.

“Oysters are filter feeders. Each mature oyster filters 200L of water a day. When the first Europeans sailed into these waters you could see the bottom 10 meters down. They strip excess nutrients from the water while at the same time they’re removing calcium carbonate to build their shells,” he explains.

This carbon can be audited and qualifies for carbon credits and he believes Port Phillip Bay and Westernport could be turned into aquaculture provinces. More than that, by re-seeding the local reefs, they could act as a natural carbon sink.

“We certainly have the hatchery capacity here at San Remo to get the ball rolling.  Once re-established, the reefs would expand naturally. All it needs is a coordinate government approach,” says Cooper.