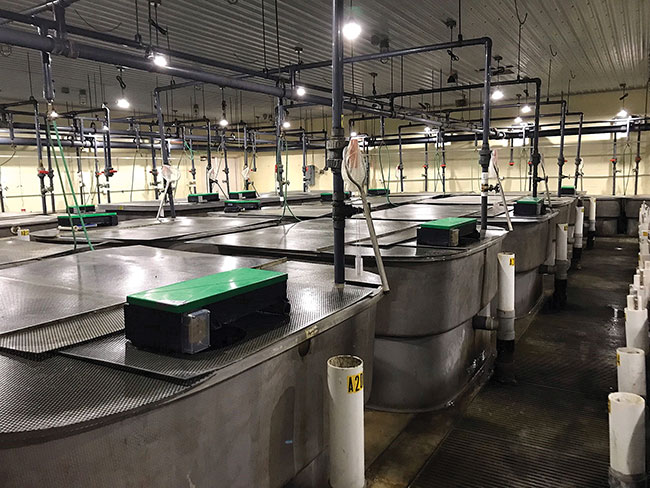 The lake whitefish (Coregonus clupeaformis) has long been a popular North American food fish. Traditionally a large fishery was maintained in the Great Lakes, but stocks have been seriously depleted from habitat destruction, overfishing and, most recently, competition from invasive species. With a well-established market and a good value there is much interest from the established aquaculture industry and indigenous fish farms around the Great Lakes, to start farming lake whitefish as a commercial aquaculture species.

Researchers at The Ontario Aquaculture Research Centre (OARC) at the University of Guelph in Guelph, Ont., Canada received funding for a pilot study at the OARC to study the feasibility of rearing whitefish. OARC Station manager Marica Chiasson who is heading up the project, observed, “there has been a lot of interest in lake whitefish culture from two sectors: established net-pen operators are looking to diversify into new species and see lake whitefish as a good option, and from potential recirculation aquaculture system (RAS) operators who see lake whitefish as a species with good potential for land-based grow out.”

Feasibility study
OARC’s partnership with New North Fisheries provided the basis for their overall feasibility study. Each year, fry are reared in the OARC RAS at 15 C, allowing the whitefish to feed readily and grow quickly. Growth is significantly reduced when fish are put into the station flow-through system with a natural temperature of 8 C to 9 C. “We continue to get better with early rearing and husbandry with each year class we work with. While similar to trout, the whitefish fry are much smaller and need small feed that requires great care,” said Chiasson.

From the fry they receive each year, OARC staff retain a group of fish to use as captive brood, the beginnings of a domestication line. Retained whitefish are kept in the RAS at 15 C until space constraints force them into the much larger, but cooler, flow-through system. These fish provide the subjects for developing protocols and methods for husbandry for all life stages, and allows OARC staff to perform specific research. “We keep the density at 15kg/m3. When the density approaches 30kg/m3, the fish start to show signs of stress.” As lake whitefish do not handle very well, normal husbandry events such as moving and weight sampling cause significant scale and mucous loss. “Whenever we perform husbandry events, we make sure to keep the density low and the fish loads small,” remarked Chiasson, “survival is very good as long as they are handled carefully.”

Diet study
With only one commercial lake whitefish farm in operation, there is no species-specific diet available for whitefish. “No feed company is going to create a feed line when there are no farmers to sell to. Lake whitefish are salmonids, so we started to feed them a rainbow trout (Oncorhynchus Mykiss) diet, as the metabolic needs are similar,” said Chiasson. Because of the uncertainty with their exact dietary needs, OARC decided to undertake a feed/growth study to compare the performance of three different diets, each with a different fat/protein ratio.

Two trout diets and a tilapia diet were fed to four replicates over 140 days. Average weight and length/width assessment occurred every four weeks. A subset of fish from each replicate were sacrificed for visceral fat and liver analysis. “We found lots of visceral fat in all the groups we sampled; each diet provided the fish with an adequate amount of energy for good growth. All groups increased their weight by 100 per cent. The midrange trout diet showed the best weight gain, but it was not significantly better than the high protein trout diet,” Chiasson reported. The tilapia diet produced good growth but was significantly behind the trout diets for growth. 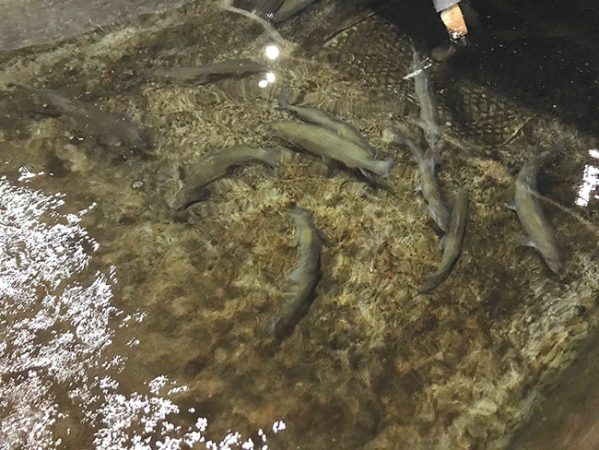 Lake whitefish populations in the Great Lakes have depleted over time due to habitat destruction, overfishing, and invasive species.
Photos: Ron Hill

Breeding
One of the most challenging aspects of mapping the culture methods for any species is closing the cycle by holding brood and producing viable offspring. OARC currently has three year classes of lake whitefish brood at the facility. Lake whitefish are iteroparous and can be spawned in multiple years. At the OARC facility, males tend to mature (mostly) in their fourth year, while females tend to mature (mostly) in their fifth year. Brood are kept outside in flow-through raceways receiving the natural photoperiod. However, “the biggest challenge with the brood is getting the males and females to line up,” said Chiasson. Despite both sexes residing together and receiving the same cues and photoperiod, the males and females are out of sync. “The males are maturing a month before the females are ripe which is causing us to miss our window, causing our own egg production to be inconsistent thus far.”

Instead of relying on photoperiod, OARC will be trying more modern methods to force the male and female gametes to line up. “For our next brood group, we will be doing a study where we administer Ovaplant ahead of time to induce spawning in females and compare that to an untreated group. Hopefully, this will give us viable gametes from both sexes at the right time.” Ovaplant is a time-released solid pellet or liquid spawning inducer containing salmon Gonadotropin – releasing hormone analogue (sGnRHa) that is injected into the fish. It is commonly used by brood sites to advance and synchronize spawning dates of females and increase milt production in males.

Future studies
OARC staff have much more planned for the lake whitefish. The next phase to refine their diet is custom diet trials. Researchers at University of Guelph are formulating their own diets with custom fat/protein ratios to test at the OARC, as well as insect meal diets. University of Guelph is fortunate to have a feed extruder and will be creating the diet formulations and then extruding the pellets for use with the lake whitefish to test different ratios and ingredients. Several other studies are in the works for the species including temperature studies to determine the best range for rearing at each life stage.

Staff will continue to develop the brood strain while they work on methods and protocols to rear lake whitefish. Through their own studies and their continued partnership with New North Fisheries, OARC continues to support the rise of lake whitefish culture. “There is a lot to learn and study but I think there is exciting potential for whitefish as a commercial species,” said Chiasson. Early results with fry, using the RAS, and the success New North Fisheries is having with grow out suggests whitefish will be a viable commercial species in the future.