Recent research at the Flower Garden Banks (FGB) National Marine Sanctuary in Galveston, TX, has led to the site being designated as the world’s first confirmed manta ray (Mobula birostris) nursery. The discovery could be the first step toward a better understanding of a species that still holds many mysteries regarding their lifespan and habits. 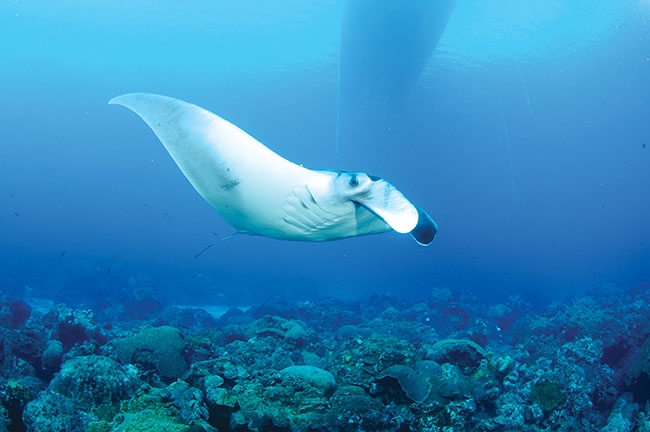 The discovery of the world’s first confirmed manta ray nursery has researchers on the path to discovering a natural hatchery and other secrets of a still-mysterious species.

“In the region there is likely an area where they are giving birth,” says research coordinator Emma Hickerson. “Once we start tagging the animals, the adults and the juveniles, we can learn more about their movement and we may be able to determine where the hatchery is. It’s likely to be fairly close since we have the number and size of animals that are very young in the sanctuary.”

The discovery was made by marine scientist Joshua Stewart, who recognized baby mantas at the FGB due to the small size of their claspers (reproductive organs). They soon realized the FGB met the three criteria for a nursery – there are more juveniles than other areas, they remain in that area for extended periods of time and it is used by juveniles repeatedly.

Hickerson hopes the discovery of the nursery, and the imminent discovery of a hatchery, can shed some light on the remaining mysteries of the species.

Stewart hypothesizes that the juvenile mantas are attracted by the krill found in the significant coral reef in the area.

The discovery of the world’s first confirmed manta ray nursery has researchers on the path to discovering a natural hatchery and other secrets of a still-mysterious species.