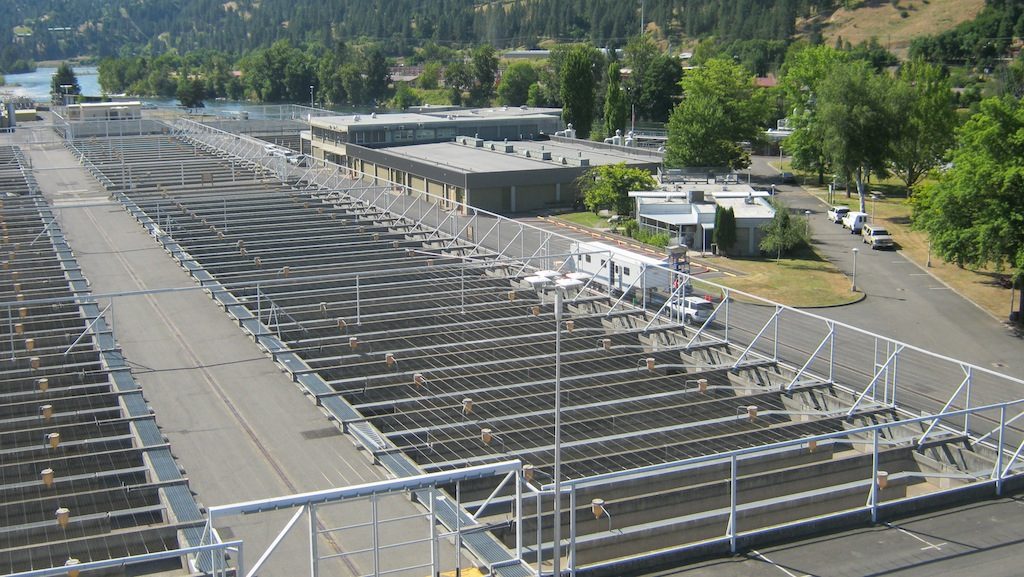 A research project has confirmed that a change in water source at the federal Dworshak Hatchery in Idaho (DNFH) is indeed the reason for a significant drop in IHNV infections. The study reaffirms the importance of a secure, disease-free water source for hatcheries.

Rachel Breyta described her study, “Successful mitigation of viral disease based on delayed exposure rearing strategy at a large scale steelhead trout conservation hatchery,” by phone from her office with the US Geological Service, Western Fisheries Research Center.

Breyta calls the threat from IHN in the Columbia River system “significant.” “In terms of volume it is the number one threat,” she said. But not all IHN is the same. Breyta works with genetic typing of the virus and three distinct strains have been identified in North America. By conducting genetic surveillance of the virus present at the Dworshak hatchery, Breyta was able to conclusively demonstrate that using disease-free water was key to fish survival.

IHNV first appeared in the Columbia watershed in the 1970s and in 1982 Dworshak suffered its first losses. Between 1982 and 1989, 14 million fish died out of a total of 21 million fish hatched at DNFH.

Some help arrived in 1992 with the construction of the Clearwater Fish Hatchery (CFH) by Idaho State, across the river. CFH sourced water from above the Dworshak dam and the DNFH was able to share some of that reservoir water to supply their steelhead hatch and early rearing systems. Breyta calls the reservoir a “low risk” water supply.

“Reservoir water has been used for egg incubation and early rearing since 1992,” Dworshak Fisheries Complex Manager Steve Rodgers says by email. “So we’ve had very little IHNV impact there.”

However, juvenile growout was another story. Steelhead were housed in outdoor ponds supplied with river water May through to the next April, through the height of returning fish passage.

“I would not say that the Columbia basin is ever free of IHN,” says Breyta. “Hatcheries and wild fish are screened every year and every year fish are found positive.” IHN hit DNFH again in 2009, with a vengeance. The hatchery lost 60% of their juvenile steelhead production.

In 2010 the hatchery re plumbed and with cooperation from the Clearwater hatchery was able to provide clean water from the reservoir connection to outdoor ponds from May through August with the fish beginning to receive a river-reservoir blend in September.

It worked again. “Since implementing extended reservoir water rearing began in 2010, our eyed egg to smolt survival has improved dramatically, and was 86% in 2014,” says Rodgers.

Breyta’s study showed that there were IHN-infected adult steelhead in the river through the summer and control groups that were reared on river water were infected with the same strain and had to be culled. But juveniles growing on reservoir water survived. When all fish were exposed to river water in the fall, they developed a less virulent strain of IHN, that was transmitted from infected Chinook that were in the river for their fall spawning, but losses were not significant.

Yet both Breyta and Rodgers are worried. “It is plausible to say that year-old steelhead are more resistant to the disease but there is no data to say one way or the other,” says Breyta. Rodgers is concerned that the virus may mutate for it’s own survival and affect larger sized fish in the future.

Across the river at the Clearwater hatchery, they have never had a significant fish health epozootic in 30 plus years. “Clear evidence of the high quality of that water source,” says Rodgers.

Dworshak National Fish Hatchery (DNFH) sits at the confluence of the North Fork and the mainstem of the Clearwater River in north-central Idaho. The Clearwater drains into the Snake, the largest tributary on the Columbia. The hatchery was constructed to mitigate steelhead losses due to the Dworshak dam. Built by the US Corps of Engineers (COE) between 1966-1970 the dam blocks the North Fork of the Clearwater, which was historically a significant steelhead spawning stream. The water source for the hatchery is a direct intake of river water about a kilometer below the dam.

After losing 14 million fish over five years in the 1980’s DNFH was able to source some upstream water from above the dam, thanks to a new hatchery being built across the river. When the Clearwater hatchery was constructed in 1992, engineers built a pipeline through 25 feet of concrete in the Dworshak dam and sent it more than 1.5 miles downstream to the new hatchery. DNFH was allocated 5,000 gpm of that water and they have been using it to successfully hatch and incubate.

However, fish in growout ponds remained on river water. A massive loss of juveniles in 2009, prompted DNFH to change their water system and Clearwater agreed to route more water from May to August, when they have less demand.

But there is still a problem. “We only have a limited amount of reservoir water for fish rearing for a limited amount of time,” says Steve Rodgers, the Dworshak Fisheries Complex Manager. “So we eventually have to put all steelhead on river water. The thought is if we grow our steelhead to a larger size before that exposure occurs, their immune systems are further developed and they are better equipped to fight off IHNV.”

The supply line from the Clearwater hatchery is maxed out says Rodgers. And anyway, Clearwater fish have first priority. He calls the current arrangement “a stop gap.”

DNFH is slated for a complete rehabilitation by the US Army Core of Engineers. “We have advocated for 100% reservoir water rearing for all fish here (they also raise Chinook) as part of the rehab project,” says Rodgers. “To permanently address the IHN issue and fish pathogen issues in general.”

The other option would be to install a huge ozone treatment facility to neutralize pathogens in the river water. “This would be extremely expensive to construct, operate and maintain,” says Rodgers. “100% reservoir water is simply the right thing to do.”