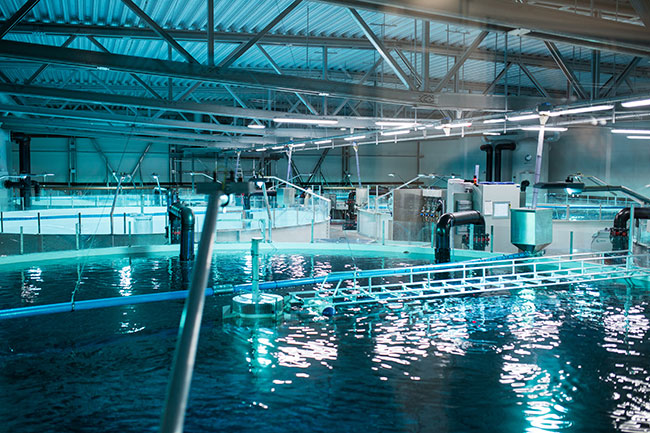 Land-based salmon farming is ready for commercial development in Canada’s British Columbia, as its sea-based counterparts – offshore and floating, closed containment systems – are still years away from commercial viability. This is according to a new report released by the Department of Fisheries and Oceans Canada.

The report identified four production systems that offer new opportunities for producing market-size salmon in Canada, while minimizing environmental impacts. These are: land-based or recirculating aquaculture systems (RAS); hybrid systems, a combination of RAS and marine-based operations; floating, closed containment systems; and offshore aquaculture. All these four, according to the report, provide multiple improvements over the traditional net pen systems.

“Land-based RAS and hybrid systems are the two technologies ready for commercial development in B.C., while floating closed containment requires 2-5 years of further review, and offshore technologies may require 5 to 10 years of review,” the report said.

RAS technologies, while emerging as the most promising for B.C., are not without challenges, however. For example, the general global shortage of workforce trained on RAS farming remains a challenge. “Closely tied to this is the need for training programs through universities and colleges in coordination with working land-based RAS facilities to provide hands-on experience.”

Preventing off-flavours for RAS-grown fish is still an on-going challenge for RAS systems, the report pointed out. Research organizations, such as the Freshwater Institute, have been engaged in research to address this issue of off-flavours in RAS.

“The projected addition of global salmon production due to land-based RAS and other technologies is expected to bring prices down as the tension between supply and demand is alleviated,” the report said. “Depending on the severity of price drops, land-based RAS profitability may be affected. This market risk, coupled with production risks, will drive efforts to reduce land-based RAS costs and build a stable track record to satisfy investors and insurance companies.”

The report recognized that clear regulations and policies are needed to allow for the development of new technologies for salmon farming. In land-based aquaculture, B.C.’s provincial waste discharging permits are “topics of uncertainty for land-based system developers,” the report said.

“Traditional farms can only use composted aquaculture waste materials as fertilizer for crops if these meet content requirements, in particular low salt levels. This can require costly advanced processing and/or limit potential uses of waste materials,” it said.

Clear and unambiguous permitting criteria must be instituted to attract RAS developers, the report added.