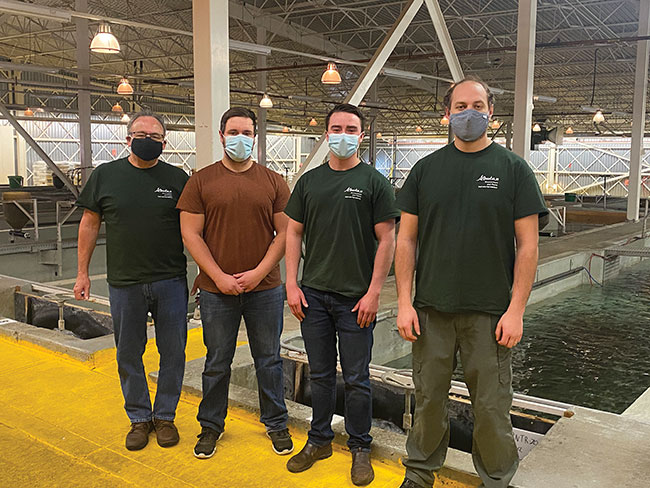 High-fives were flying around when Canada’s Alberta government announced last August it will be investing $10.3 million into Cold Lake Fish Hatchery.

The provincial government’s investment will go towards a full upgrade from its current flowthrough system to a state-of-the-art recirculating aquaculture system (RAS). Craig Copeland and his hatchery team have been working on proposals for a re-use system for many years, so this green light from the government comes with both a sigh of relief and a buzz of excitement.

“You have to wait your turn, when you’re working for the province. There’s only so much cash to go around,” says Copeland, who has been working for Alberta’s Ministry of Environment and Parks for almost 40 years. “So when it finally is your turn, you make sure that you do your due diligence and you have the right proposal and the right concept plan.”

Cold Lake Hatchery is one of four government-run hatcheries in Alberta that Copeland oversees. This particular hatchery rears and stocks about 900,000 Tiger, Rainbow, Brook and Brown Trout per year. It is also the only provincial hatchery that is designed to raise walleye.

Copeland splits his time as fish culture manager at the Ministry with his duties as mayor of the City of Cold Lake. First elected in October 2007, he is currently serving his fourth consecutive term as mayor.

Still, Copeland admits that his work at the hatchery is his first love. He worked as a technician when the hatchery was built in 1984, and now he shares his thoughts with Hatchery International on what it means to oversee the beginning of a new era for Cold Lake.

Hatchery International: How many of you among the team have been working at the hatchery since Day One?

Craig Copeland: Just me and Harvey Pollock (manager of Cold Lake Hatchery). Of the 19 people that work for me among the four hatcheries, there are maybe four that are members of that old guard, if you will. The rest of the staff are anywhere from 23 years old to their early 40s. But we’re all going to have to learn a new way of raising fish because it’s going to be uniquely different. We’ve got a really, really good team. And so, yeah, they’re all looking forward to the challenge of the RAS.

HI: What is the main impetus that’s driving this new build? What are the main things you want to achieve with this system upgrade?

Craig Copeland:  One of the big issues for Cold Lake is the lake, of course, is frozen for like five to six months of the year. And so, if you’re raising your fish at 10 degrees Celsius, let’s say, you have to heat up a lot of water. We’re bringing in from the lake about 300 litres per second of flow and so one of the reasons, if not the primary reason why we’re moving from flowthrough to reuse, is to reduce our natural gas utility bill in a huge way.

We’re really looking forward to studying our cost reduction, in terms of utility on the gas side now, with the new pumps and drum filters and stuff that will have to be installed with the RAS. We may experience a little bit more electrical charges but we don’t think it’s going to amount to much because we’re going to save on our ozone generator utility costs.

HI: You have a unique perspective as hatcheries manager for Environment and Parks, and as mayor of Cold Lake. What would you say is the role that this hatchery plays in the  local community?

Craig Copeland:  Alberta is kind of challenged for lakes. It’s not like Ontario, or some of the States like Minnesota. And so in our area, we’re called the Lake Land Area. There’s lots of lakes in our area that have walleye and northern pike and lake trout. So we have five stocking trucks that will put on 100,000 kilometres every year.

The economic impact in Alberta through the stock fisheries is estimated to be about CAD$166 million a year. Especially this year under COVID, it’s just crazy the amount of people that are out fishing right now. It’s great to see a lot of people enjoying the outdoors, a lot of new fishermen taking up the sport. We’re seeing an about 30 per cent lift in fishing in Alberta right now. That’s really quite exciting.

And, you know, I think Alberta (government) deserves a lot of credit, to invest in its hatcheries and infrastructure. 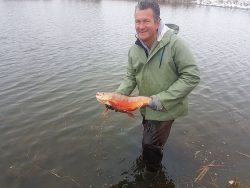 HI: Now that planning for the RAS facility is underway. What do you see is the biggest challenge?

Craig Copeland: The RAS building is going to be built right alongside our existing hatchery. It’s going to take all of the flow from early rearing and from the final rearing. The water effluent all goes to this one pit at the back of the hatchery and we’re going to come in and tie into that flow and bring it into the RAS building. The water will eventually be brought back to the early rearing and final rearing systems. And that is where Stantec has to figure out how they’re going to tie it into our existing systems.

The only time we’ll have some interruption is when we plan to shut the water off in the summer of 2022. We’re going to be repairing and retrofitting a lot of internal componenents. The hatchery was constructed in 1984 so we’ll be doing some modernization. We’re going to shut down for about 60 to 90 days.

HI: What is it like for you, as someone who has worked in this hatchery since the first day, to now see it turn into something new?

Craig Copeland:  For me, it’s pretty exciting to sort of end your career on all four hatcheries being upgraded. Three of the hatcheries will be upgraded. And we’ll have a brand new fish hatchery at Raven Creek.

Finally, Cold Lake is going to have RAS. Now, we’ll be reducing our water intake significantly and lowering our operating costs, just on the natural gas alone. And we’re pretty confident that we’re going to be lowering our our electrical power utility bill, also.

As the manager of fish hatcheries, and the whole team here in Environment and Parks, [we] are trying to reduce our price per fish, so that we’re making sure that we’re spending the taxpayers’ dollars prudently.