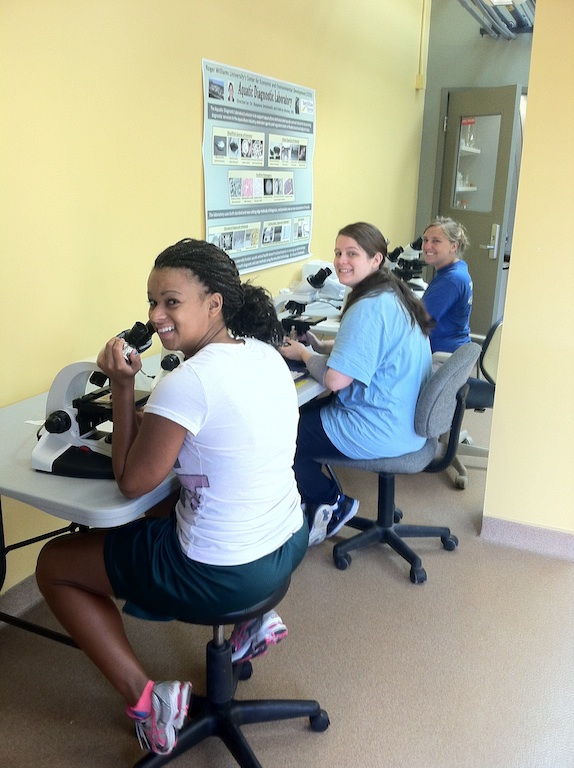 Dr. David Rowley and colleagues at the University of Rhode Island (URI) and Roger Williams University have isolated two probiotics that provide protection against the pathogen Vibrio tubiashii in oyster larvae.

Dr. David Rowley and other faculty and students at University of Rhode Island (URI) and Roger Williams University have isolated two probiotics that provide protection against the pathogen Vibrio tubiashii in oyster larvae when used prophylactically in larval tanks.

They are exploring the probiotics’ effectiveness against V. tubiashii in other shellfish larvae and also aim to find out if they may be protective against other pathogens, or if there are additional probiotics that could be useful.

Rowley and his associates conducted hatchery trials with Bacillus pumilus (RI06-95), which they had formulated into a solid material that dissolves rapidly, adding it once a day to Eastern oyster (Crassostreae virginica) shellfish larvae tanks.

Their research, presented by Dr. Marta Gomez-Chiarri, professor in the Department of Fisheries, Animal and Veterinary Science at URI, at the January NACE in Portland, Maine, had shown that RI06-95 and Phaeobacter gallaeciensis (S4) gave significant protection to both Eastern oyster and hardshell clam (Mercenaria mercenaria) larvae. For the hatchery trials, they chose to use RI06-95.

Rowley, a professor in the Department of Biomedical and Pharmaceutical Sciences, says their research into this potentially useful aid for hatchery managers developed as an accident.

“We were investigating interactions between bacteria inside shellfish to try to understand if certain ones might provide some protection against pathogenic microbes,” he says. “We screened a large panel of bacteria and saw that some showed antagonistic activities towards the pathogens and that these two were inhibiting the pathogens. As we progressed, we realized they could potentially be used as tools to prevent diseases in aquaculture. We didn’t start out to discover new probiotics that have commercial value, but that’s where our research ultimately led us.”

Gomez-Chiarri says several hatchery managers have expressed interest in helping test the probiotics and look forward to their being available in the future.

“Some of them have agreed to collaborate in our research so the path to making them available will be shortened,” she says.

Although laboratory trials are presently focused on V. tubiashii in Eastern oyster larvae, which Rowley says they chose because oyster farming is such a large industry, they are also exploring the beneficial effects of the probiotics on bay scallops, hard clams and razor clams and will conduct hatchery trials with these species.

“They seem to work with several species,” says Gomez-Chiarri, “but there are some differences between species that we are trying to figure out.” She adds that they also are testing the probiotics against other harmful bacteria such as Pseudomonas and that “they seem to prevent disease caused by all the pathogens we have tested so far.”

Rowley says hatcheries would not have the specialized laboratory facilities necessary to formulate the probiotics. “We’ve come up with an experimental formulation,” he says. “If it works, we’ll collaborate with a company to create large batches and move into commercialization.”

“We’re very hopeful that we have stumbled upon some products that will ultimately benefit the people who are doing the hardest work bringing the organisms to commercial size.”