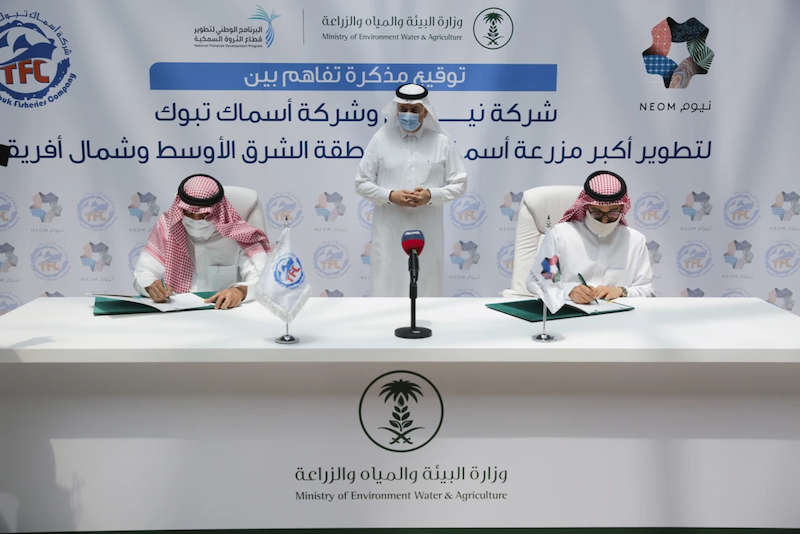 At the signing of the memorandum of understanding between NEOM Company and Tabuk Fish Company (Photo: NEOM)

A new memorandum of understanding between NEOM Company and Tabuk Fish Company will see the establishment of the largest fish hatchery in the Middle East and the North African region.

The agreement includes the development of a fish farm to expand the aquaculture industry in Saudi Arabia – both in artificial lakes and natural waters – and apply the “new generation of aquaculture technologies” in the NEOM region, in the northwestern part of Saudi Arabia.

The hatchery will have a production capacity for 70 million fingerlings, according to a press release from NEOM Company. The hatchery will focus on improving the production of native fish species in the Red Sea to help achieve the country’s goal of producing 600,000 tons of fish by 2030.

Dr. Ali Al-Sheikhi, CEO of the National Fisheries Development Program and Director General of the General Department of Fisheries at the Ministry of Environment, Water and Agriculture, said the agreement is a “fundamental turning point.”

“It is particularly so with the entry of significant companies such as NEOM Company to invest in the aquaculture industry, seen as one of the most promising and effective industries for supporting economic growth and achieving food security,” he said.

The CEO of NEOM welcomed the collaboration with Tabuk Fish Company.

“The capacity and innovative nature of the hatchery, combined with top-notch technologies, will help position Saudi Arabia at the forefront of sustainable marine aquaculture,” said NEOM’s chief executive Nadhmi Al-Nasr.

With seafood consumption in the Kingdom of Saudi Arabia projected to grow 7.4 per cent annually, sustainable aquaculture growth is key to meeting this demand and easing pressure on wild fish stocks, which are under stress in the region and worldwide due to overﬁshing, the press release said.