There will always be pros and cons but the proposition is tempting, especially when the numbers do the talking.

“There is a minimum of 30 percent to 50 percent gross savings in total production costs when you do your own feeds,” Joel Sims, owner and operation manager of Hito Central, a catfish hatchery in the Philippines, tells Hatchery International.

Sims likewise cited the assurance of ingredients – you know exactly what go into the feeds – and high fish performance. “If farm-made feeds are done right and consistent, you definitely achieve a fast growth rate with the ideal animal form/quality and low feed conversion ratio,” he says.

Hatcheries could benefit most from making their own feeds for fish in the larval and post-larval stages. But it is not easy.

“The hatchery and early rearing are the most critical phase since it is where the animals are being molded properly to achieve a good head start and momentum. Thus, feed formulation and feed processing should be done thoroughly,” he says.

‘Mother’s milk’
With stress on quality, using the “best clean raw materials and formulations” should be strictly based on the animal’s requirements.

For the most popular cultured finfish species in the Philippines, such as milkfish and catfish, the best model for fish diet in the hatchery and early rearing phase is replicating what they eat in nature. “These natural foods are considered as mother’s milk for the fry,” he explains.

Tilapia has a different diet because of sex reversal. During fry to juvenile production, the feeds should be high-protein and high-quality since the objective of the early stages of fish culture is for proper development of the animals.

Readily available artemia, which is sold in cans, is also commonly used in hatcheries.

“Based on my actual experience as an aquarium fish hobbyist, my feed cost went down from 70 percent to 20 percent of production costs when I learned how to culture natural live foods. This is why I encourage aquaculturists to learn how to culture these natural foods,” he says.

The savings from farm-made feeds do not factor in expenses from acquiring machines and equipment to pelletize or extrude the feed output.

While Sims says that making high-quality customized feed is ideal, he notes that it is a tedious and long-winded process – dealing with many suppliers, raw material testing, stowage and additional work load for the production crew, among other things. 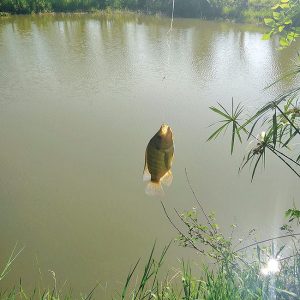 Catching tilapia at the Citrus Grove Garden in Northern Philippines. The pond is never maintained and fish is never provided with feeds. Credit: Citrus Grove Cottage 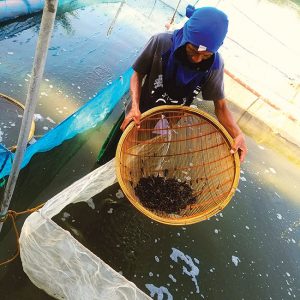 Quality vs. cost
Farm-made feeds don’t always translate into savings. “Sometimes, choosing the best raw materials may be more expensive than buying the commercially available feeds but you will be assured that you’ll have the best quality seedstock in terms of recovery and quality. It still boils down to the ‘you’ll-get-what-you-give syndrome,’” Sims says.

He doesn’t use farm-made feeds in his catfish hatchery and prioritizes quality over costs. He uses high-end commercial feeds with protein content of 48 percent. There are times when he enhances the feeds by adding more vitamins, minerals and prophylaxis, using egg as binder.

“I would recommend getting the best and not the cheapest commercial feed available. Remember that ‘cheaper is more expensive’ is based on the result it usually provides,” he reiterates.

“Good quality feeds are more expensive but will give good results. To justify its price, I would suggest to have that feed periodically analyzed. If it meets your standard, then the problem will just be getting familiar on the strength and usage of the feed. Feed-enhancing by adding in more additives to customize it for your animals can be easier done than making your own feed from scratch,” he says.

At the opposite end of the spectrum is the case of Renante Areola, a hobbyist who owns and lives at Citrus Grove Cottage, a homestead in Ballesteros, Cagayan, in Northern Luzon. He has earthen ponds stocked with six types of fish, crayfish and prawn. He has never spent on feeds.

Areola’s ponds have assorted aquatic plants and the edges are lined with nipa palms. “I never feed the fish. I never sell them. I never maintain my ponds,” he says.

He improvises. To provide extra protein to fingerlings, he installed an additional light in his hatchery. At night, the reflected light on the pond surface attracts hordes of insects, providing ad libitum protein feeding for the fingerlings.