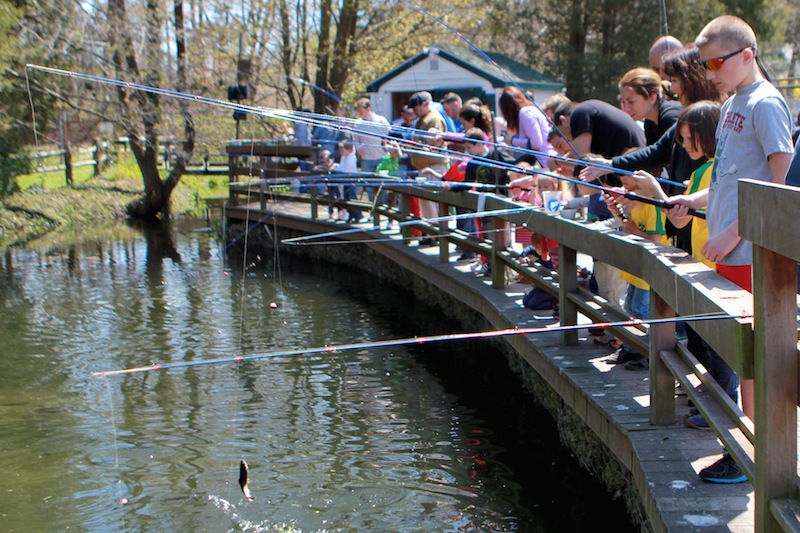 Spring and fall fairs at the Cold Spring Harbor Fish Hatchery provide educational opportunities for children and adults alike. Special events and festivals allow hatcheries to engage with their communities and have fun

Around the world, fish and shellfish hatcheries regularly hold events and festivals at their facilities. The events could be anything from educational functions based on work at the hatchery to non-related events and parties which simply take advantage of the facilities. Described below are just a few of the many we’ve heard about:

Return of the Salmon

In the 1990s the Coleman National Fish Hatchery in Anderson, California, began holding an annual Return of the Salmon festival in October. Project leader Brett Galyean says that the festival began as a community engagement effort.

“It was done as an outreach event that we host to let the public come out and see salmon; see the lifecycle and to see the role that the hatchery plays and see this marvel of nature right in their backyard, here in the heart of California,” says Galyean. “Each year it gets a little bigger. It can vary from 45 to 60 exhibitors which could be anything from another federal agency to a state agency and local groups that are doing different outdoor, nature types of events.”

Galyean says that in a good year with good weather, the festival can attract more than 5,000 visitors. Logistically, it’s a difficult task, as staff co-ordinate the festival in addition to their regular duties. The most popular event most years is a 30-foot aquarium on a trailer containing salmon.

“I said in the local media to come out to Coleman and get a selfie with a salmon,” says Galyean. “You can get a six-year-old and he can come right up and get eyeball-to-eyeball with a 25 pound fall chinook salmon. They can’t get that view in the ladder or out in the river.”

Engagement with the community and possibly inspiring the next generation of aquatic researchers was also cited as one of the driving goals behind the Marine Science Day event held annually at the University of Georgia’s Skidaway Institute for Oceanography in Savannah, Georgia.

“People who come to visit and learn a little bit; they might be inspired by something they see to investigate things more fully,” says the Skidaway Institute’s External Affairs Manager, Mike Sullivan. “A kid might think, ‘that’s really cool, maybe I should pay more attention in my science class.’ Then I think we’re helping the field in general, as well as ourselves.”

Sullivan says that the event started with a local symphony orchestra which would do a warm-up concert on their campus before concert season began. Organizations on campus decided to take advantage of the crowds the warm-up concerts would draw and developed it into an annual event. Though the symphony has been out of the picture for more than a decade now, Marine Science Day is going strong.

“Once a year, we roll out the red carpet and put on exhibits, talks, tours and activities ranging in age interest from children through adults,” says Sullivan. “The children are the easy part because the aquarium does all kinds of things like touch tanks and reptile shows and crabbing off the dock, and it’s all free.”

Sullivan says that the Institute, which includes the University of Georgia’s Marine Extension Aquarium and Shellfish Laboratory and the Grey’s Reef National Marine Sanctuary, sees a fair amount of tax payer money coming in and that Marine Science Day is an opportunity for the community to see what their taxes are paying for.

Similar to the Skidaway Institute and their symphony orchestra, the Shepherd of the Hills Fish Hatchery in Branson, Missouri, also developed a unique event around some annual visitors – in this case up to 500 turkey and black vultures who have historically roosted near the site of the hatchery. The hatchery will hold their next Vulture Venture on February 20th.

“Their peak is over the wintertime, which is usually a slow time at the hatchery,” says John Miller, visitor centre manager for the hatchery. “So we decided to have a promotion to let people learn more about these very misunderstood, but very unique, birds and see them in large numbers.”

Miller says that Shepherd of the Hills has developed a wide offering of educational activities revolving around the vultures, teaching visitors about their feeding habits and why they play an important role at the hatchery and in nature in general.

“They’ll explain how important vultures are to nature,” says Miller. “That they recycle things that could get bad and cause all kinds of diseases. They’ll talk about how these animals are designed to be nature’s recycle clean up crew.”

Halloween at the Hatchery

The Texas Freshwater Fisheries Centre is an unusual case – along with more traditional events they hold completely non-hatchery related events at their facility. For 19 years they’ve held an annual Halloween at the Hatchery event, which provides a centralized location for trick-or-treating in a rural community which has few concentrated neighborhoods.

“Every year, approximately 30 local businesses and organizations volunteer either some money or money and time and come out with thousands of pieces of candy,” says Events and Volunteer Coordinator James Booker.

“We provide tables around the free fishing community ponds and the hatchery interpretive centre and they set up for a few hours that evening and give away candy and maybe a flier or a coupon for their business. So a child can come and get a pretty big bag of candy in about two hours.”

The hatchery also became home to annual Cinco De Mayo celebrations, and a Fly Fish Texas event is held in March where 100 volunteer fly fishermen spend the day sharing their wisdom with beginners.

“It didn’t really have much to do with fish the first couple of years,” says Anna Kastner, manager of the Feather River facility. “The hatchery started to get involved and opened up the spawning process during the day so people could see what we do. What’s really cool about this festival is that the community really stepped in and wanted us to participate. There’s stuff in town and buses that take people to all the different events. The town is very involved in celebrating the fish coming back.”

Kastner says Feather River is in a unique situation, as Oroville is in the country but the hatchery is located in town. For this reason, engaging the community and letting them know what they do is paramount.

“It’s important that people realize that we have salmon coming through in the middle of town and this is what we do,” says Kastner. “We provide resources for recreational and commercial fishermen. We keep some of these species going by reproducing the fish. We want people to know what we do.”

On the other hand, the annual Lobster and Crab Feast at Clovelly Village in Devon, UK is specifically in support of the National Lobster Hatchery in Padstow, Cornwall.

“We get a donation on door sales and we benefit from a raffle as well,” says Sarah Boothroyd, finance and website manager. “Part of our work is that people can adopt a lobster which pays for a baby lobster to be raised and released into the sea. It makes people think, if you’re eating a lobster it’s quite nice to pay for one to be put into the sea.”

Boothroyd says that the hatchery is the site of much research and stock enhancement efforts, attempting to create a sustainable fishery and to support fragile coastal communities. Every year they release about 800 lobsters into the sea as part of the Feast. For that reason, in addition to the financial boon, the event helps to maintain good relationships with local fishermen.

“It’s great that they support us every year,” says Boothroyd. “Our charity fits well with the event.”

Another unique situation is the Cold Spring Harbor Fish Hatchery in New York state, which is a historic trout hatchery which was turned into a not-for-profit organization.

“Our mission is to educate about our freshwater ecosystem here in New York state,” says Hatchery Director, Steven DeSimone. “We utilize the trout hatchery for two reasons – to keep its historic presence, but also to educate the public regarding all sorts of fresh water fishing opportunities, and habitat, conservation and stewardship.”

As a result, while these sorts of events are often an additional component for many hatcheries, for the Cold Spring Harbor hatchery it is their primary focus. Most popular, DeSimone says, are a pair of spring and fall fair events, which attract nearly 1,000 people every day for educational opportunities as well as kids’ fishing and carnival games related to freshwater environments. Summer camps are also very popular, drawing students from kindergarten to eighth grade for an immersive experience learning about fresh water ecosystems.

“From our perspective, we can capture certain grants if we can show that we’ve had a certain number of people through the door,” says DeSimone. “So, it may not necessarily manifest into revenue right there and then, but maybe down the line through grants. Our budget is based on what we think we’re going to be able to pull that year. It’s a not-for-profit. You make exactly what you’re going to spend.”