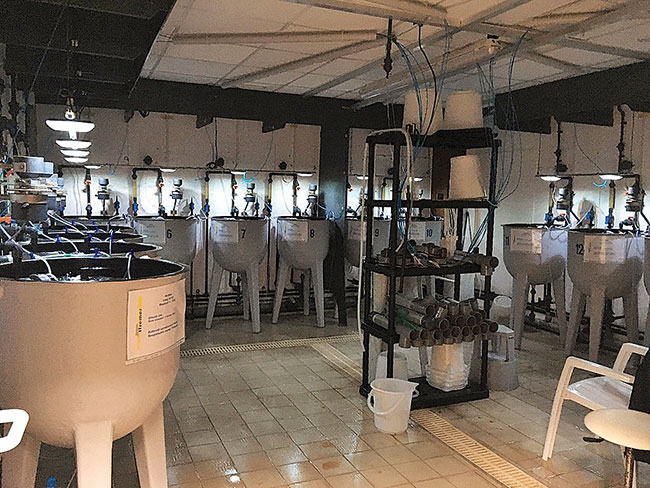 European sea bass parents that have been selected for growth for three generations also produced significantly more females than parents of wild origins, according to a study on factors affecting production of more females.

“Improved growth rate at the juvenile stage is key for sex determination, so that females that have been selected for growth for several generations produce individuals with highest growth rate that become females,” Dr. Benjamin Geffroy, researcher at MARBEC, Ifremer, told Hatchery International.

Temperature is known to influence the sex of European sea bass as in other fish species. More males are produced at relatively high temperatures.

The current study, “Parental selection for growth and early-life low stocking density increase the female-to-male ratio in European sea bass”, published in Scientific Reports, provided the first-time evidence that environmental factors other than temperature can affect the sex of European sea bass. It investigated the impact of growth and stress in the process, considering that temperature is known to influence growth rate and cortisol production.

The experiment aimed at reducing stress and affecting early growth rate. Larvae and juvenile originating from both captive and wild parents were exposed to three different treatments – low stocking density, food supplemented with tryptophan, and a control. Tryptophan is an amino has been shown to modulate fish behaviour, stress responses, and antioxidant and immune systems.

The results provided only correlations between stress and sex at the group level.

“It is not clear if stress directly impacts the sex of sea bass, as demonstrated in some other fish species, where enhanced cortisol production drives the masculinization of those fish,” Geffroy explained. “Here we only detected some tendencies at the group level (in the hypothalamus).”

“In fact, we believe that being at low density might improve growth rate – possibly by diminishing stress. Then early growth rate was found to be key in explaining sex determination, with individuals displaying the highest energy level and growth rate developing as females. Those that do not grow quickly become males in this species with environmental sex determination,” he said.

More females are preferred in European sea bass production because these show much better growth rates than males. He explained weight dimorphism ranges from 70 per cent in the young stages to 30 per cent in two-year old fish. About 30 per cent of males mature early, which further reduces their growing potential. The study is supported by the European Union in the framework of the 3S project (Sea bass, Sex and Stress), which Geffroy coordinates.