A research summary from the Freshwater Institute 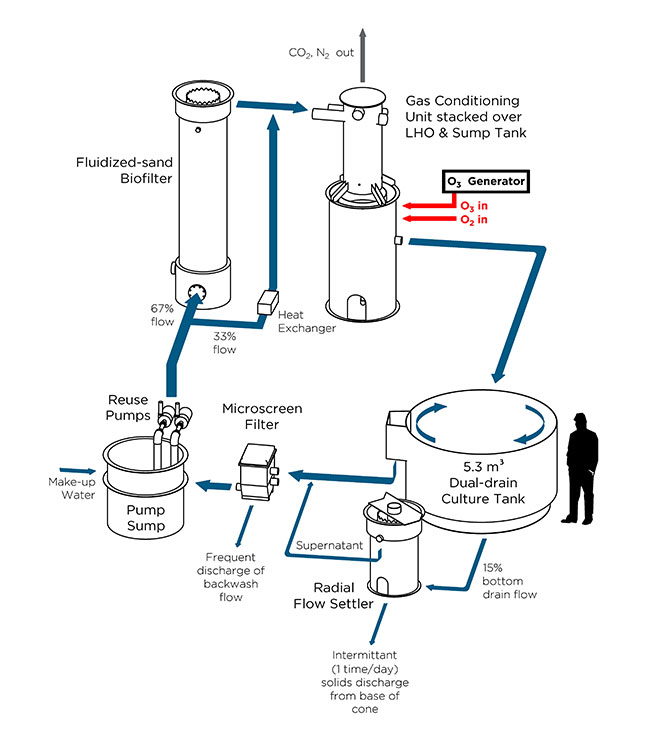 Ozone (O3) is a powerful oxidant that provides considerable water quality and fish performance benefits when applied within recirculating aquaculture systems (RAS). Ozone can be used in seawater and brackish water systems. However, its application is safer in freshwater where the primary reaction by-product is oxygen.

Various methods are used to transfer ozone to RAS water, including sidestream contact chambers, fine bubble diffusers, and combined use with foam fractionation. The Conservation Fund Freshwater Institute (FI) has developed a different approach, where ozone is added alongside the primary oxygen gas within a low head oxygenator (Fig. 1). With this method, the entire RAS flow is ozonated just before water returns to the fish tank.

Several precautions are taken to prevent toxic ozone residuals from reaching the fish when using this strategy. First, ozone is applied at a conservative, non-disinfecting dose that is primarily intended for water quality enhancement. As an additional failsafe, oxidation reduction potential (ORP) – an indirect measure of ozone residual – is monitored via a differential sensor positioned at the tank inlet. Millivolt readings from the ORP probe are received by a digital control system that is integrated within an on/off feedback loop. When an upper ORP setpoint is reached (typically 300-320 mV), one of two strategies are employed to maintain a safe ORP level in the fish culture environment: 1) a solenoid valve closes to temporarily suspend ozone addition, or 2) O3 output is automatically discontinued by the ozone generator until a lower ORP setpoint is reached. These processes have been developed and refined over nearly three decades of research and are used in FI’s semi-commercial scale RAS for production of market-size salmonids.

Although effective disinfection and water quality enhancement were achieved with the ozone/UV method, this design required significant energy to treat the full RAS flow with a UV dose > ~50 mJ/cm2. Over the last decade, FI has continued to expand the knowledge base regarding ozone use in RAS through applied research. Recent trials have increased our understanding of water quality enhancements provided by ozone, and have revealed some interesting trends that point to a possible growth advantage for rainbow trout and Atlantic salmon.

Interestingly, a recent unpublished study evaluating the effects of ozone on post-smolt Atlantic salmon performance reflected many of the same production system and fish performance advantages previously observed with rainbow trout. For instance, Atlantic salmon growth curves began to separate immediately after the onset of ozonation and gradually diverged over the next eight months (Fig. 4). It’s likely that cumulative water quality changes brought about by ozone led to enhanced growth during each of these trials, but the exact mechanisms for improved fish performance are unknown.