Horn Point’s automated feeding system can be scaled up or down, supplier says 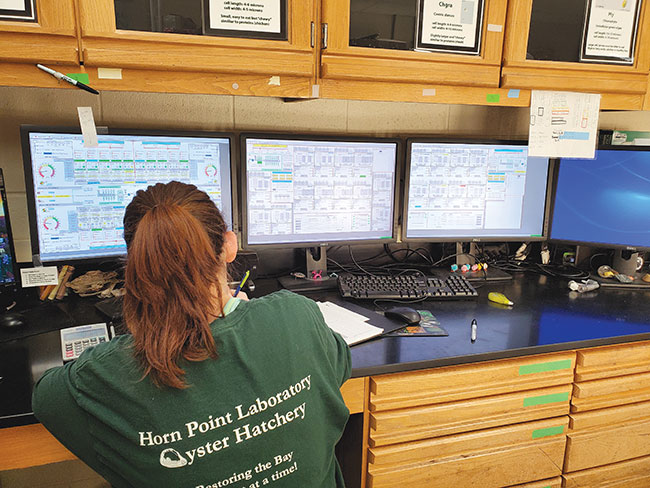 After a comprehensive presentation at the Milford Aquaculture Seminar in January by algologist Julie Trommatter, one of the first questions was, “How much did it cost?” That brought chuckles from the crowd. Many hatchery owners obviously felt more like Chevy drivers.

The software and hardware, which Trommatter calls, “innovative computer programming and inventive plumbing,” also sit in a special setting, with different rooms dedicated to the algae and larvae. That was another way this presentation felt foreign to many.

Still, there is no argument about the performance of the automated feeding system which has produced a significant improvement in oyster setting efficiency. That is because the system provides a fairly consistent diet to larvae throughout the day, rather than the glut of a single meal delivered by hand, pump, hose and timer, Trommatter says.

For hatcheries interested in automation, the system’s designer and supplier Campbell Scientific says it can be scaled up or down.

The hatchery
Horn Point Hatchery is one of the largest oyster hatcheries on the east coast of the U.S., with more than 800 acres on the banks of the Choptank River. As part of the University of Maryland Center for Environmental Science, it provides Eastern oyster (Crassostrea virginica) larvae and seed for oyster research, restoration and education, as well as spat on shell for commercial growers.

It’s a thriving research center that works with a range of prominent partners on initiatives impacting the entire industry. The state-of-the-art oyster production facility itself is an important component of the work because it is used to demonstrate new and innovative oyster aquaculture techniques. It has eight full-time staff.

Before and after
In the “olden days” of the hatchery prior to 2003, oyster larvae were fed once a day by hand using a pump, hose and timer. But when the lab was rebuilt, automation was introduced to make several processes more efficient.

Every hour, samples are drawn from every larval tank so that an in-line fluorometer can take a reading, which the system converts to an approximate cell count. “It’s super helpful for us to be able to more easily monitor the growth of individual cultures,” says Trommatter, who serves as a faculty research assistant.

The system tracks fluorometer readings in both algal and larval tanks over time so that a technician can see if a tank’s blooming, crashing or even experiencing glitches. For example, when a valve didn’t open because of an electrical problem, the system’s screen did not register the fluorescence level appropriate after a feeding. The team sprang into action.

At a time when there are concerns about changing ocean chemistry, this system can also maintain pH automatically.

The star of the system, however, is its feeding functionality. PVC pipes – some six miles of them – loop from the air-conditioned greenhouse of algae tanks into the adjacent room of larval tanks into the seed lab and then back to the greenhouse. Because valves are connected to the system controllers, they automatically open and close.

“This is where the Campbell Scientific hardware and computer software really communicate,” says Trommatter.

The level of technology at Horn Point in no way diminishes the need for human input and rigorous attention. It’s a dynamic balance of automation and manual overrides. “So much can happen in such a short amount of time,” Trommater warns.

Every day she plans the diet of the larvae, looking at the densities of the algae, the age of the culture, and the age of the larvae. Fluorometer readings again play a role here to ensure that a scheduled feeding won’t bombard larvae with too much food. “It acts as a helpful fail-safe because sometimes too much food is just as harmful as too little food.”

In addition, oysters can be fed up to four algae species a day. “I like to feed four to six times a day,” Trommater adds. It’s not unlike how nutritionists advise their patients: eat smaller meals more often and enjoy a variety of vegetables.

The overall system can be scaled up or down, depending on the size of the hatchery and budget, says Steve Gunderson, a sales application engineer. “It’s an issue of decreasing or increasing the numbers of sensors and data logging equipment as appropriate for the location.”

The system’s software is known as RTMC Pro. It features real-time monitoring and control functions, with a custom graphical user interface created from a large library of alarms, switches, status bars, and charts.

“Plus, there are different ways that people can interact with the data. Once all the electronics are in place, they can use their mobile phones to keep an eye on operations. They can have data emailed to them. They can have alerts sent via text message,” says Gunderson.

“And there are a number of other ways that we can display data on webpages to provide actionable insights that would help hatchery operations be more efficient and more automated,” he adds.