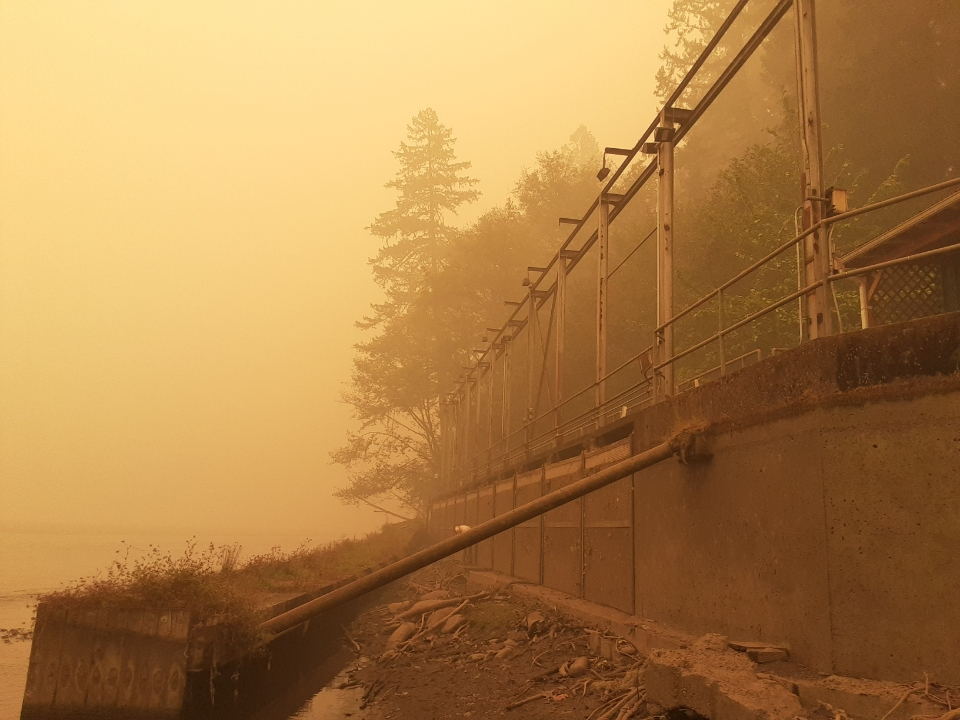 The intake at Leaburg Hatchery when Leaburg Lake water levels were dropped by EWEB due to the fire. (Photo: ODFW)

Hatcheries in the U.S. state of Oregon are scrambling to save more than a million fish as wildfires continue to rage through the region.

According to the Oregon Department of Fish and Wildlife, several fish hatcheries have been evacuated due to the wildfires. Among them are Rock Creek, Clackamas, McKenzie, Leaburg, Minto, Marion Forks, Salmon River and Klamatch hatcheries.

Rock Creek Hatchery on the North Umpqua River suffered the most severe damage to infrastructure, followed by Klamath, Leaburg and Minto.

Nearly 1.2 million Spring chinook, Summer steelhead and Rainbow trout from the Leaburg Hatchery have been released into the McKenzie River as the hatchery’s water supply got cut off after Eugene Water & Electric Board (EWEB) was forced to open the Leaburg Dam rollgates as a precaution as debris from the fire could come down the river and clog or overtop the dam.

“Those fish would not have survived very long without new incoming fresh water,” said Erik Withalm, Leaburg hatchery manager. “We pulled tail screens to get fish out as quickly as we could before evacuating again as the fire approached. Fortunately, structures at the facility sustained only minor damage with only the wellhouse and a tractor burning.”

Most of the fish released from Leaburg are expected to survive, the ODFW said.

As Leaburg Lake levels have come up, hatchery staff are returning to the site as they are able to recollect spring Chinook adults in the trap for eventual spawning and to transfer any eggs to McKenzie Hatchery. Any dead fish at the site are being removed. The hatchery’s popular sturgeon also survived the fire, but may eventually be released into the McKenzie River as the hatchery is no longer suited for long-term holding of the sturgeon due to likely water supply issues that will occur in the coming months.

Some 840,000 spring chinook eggs have been spawned at the Minto Hatchery despite the crisis, and another 900,000 eggs are expected, according to hatchery manager Greg Grenbemer said.

“Those eggs will go to Roaring River until we can take them back to our hatcheries on the Santiam River,” Grenbemer said.

Meanwhile at the Klamath Hatchery, an estimated 50,000 triploid brown trout were lost as its hatchery building, shop and office complex were damaged in the fire, and power, water and sewer were compromised.

“In some cases, staff were able to transfer some adult fish to other facilities, or fish were released. A few other ODFW facilities are at Level 1 or 2 evacuation status, including the Clackamas regional office, South Santiam/Foster, Dexter, Roaring River, Sandy and Cole Rivers. Staff are moving equipment offsite and have developed contingency plans for fish holding or release if moved to Level 3,” the ODFW said in an update on its website.

Further damage and fish loss assessment to the state’s hatcheries will be conducted once it is safe to do so, the agency added. “While they assess fish loss, Fish Division staff statewide are also developing contingency plans for production and stocking in 2021 and into the future,” the ODFW said.