New research out of Oregon, U.S.A, has found no negative impacts on wild steelhead (Oncorhynchus mykiss) populations from interactions with hatchery fish in the upper Clackamas River. 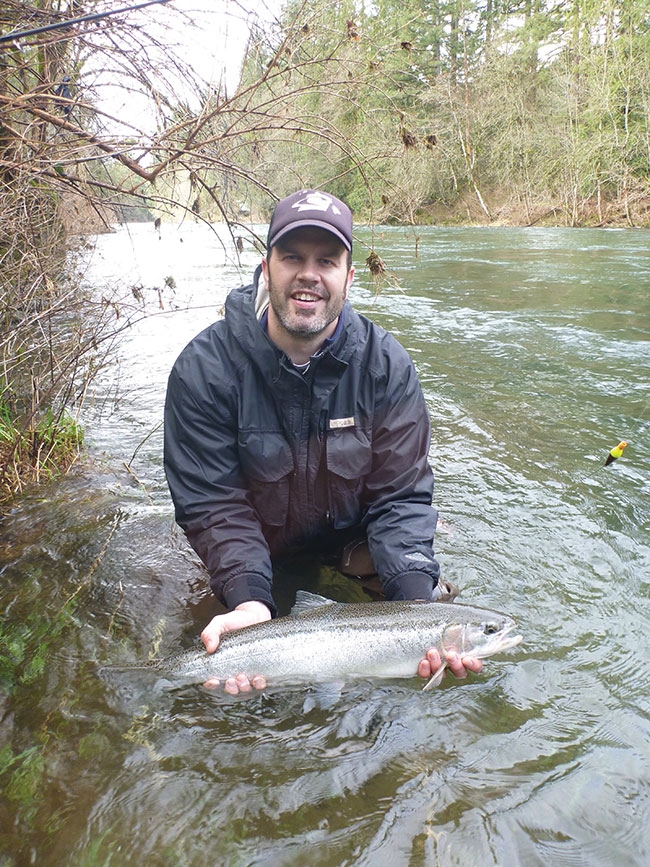 Fisheries scientist Ian Courter holds a winter steelhead in Oregon’s Sandy River. The researcher found no evidence of negative impacts on wild productions from interaction with hatchery steelhead. In fact

Courter’s research utilized a detailed and accurate dataset where fish were individually enumerated at the North Fork Dam. By analyzing abundance data, he was able to quantify various environmental impacts on wild steelhead production, but did not find any significant negative impacts from interactions with hatchery steelhead.

“What we found was there was actually a slight positive association between hatchery fish abundance and natural fish abundance,” says Courter. “That’s counter to what the conventional theory might be about hatchery fish effects. It wasn’t really strong, but it was definitely on the positive side. We suspect that’s because both hatchery and natural origin fish share a common environment – it’s not really surprising that they would both be going up and down together somewhat.”

That conventional theory about negative impacts from interactions between wild and hatchery populations was the basis for the closure of the summer steelhead program in 1999. And, Courter notes, the theoretical basis for the idea that there would be negative impacts from those interactions is solid – there have been a number of studies that have demonstrated differences between the two types of fish, but it is not yet well known whether that actually results in a negative impact on wild fish production.

“It seems to us there’s somewhat of a one-sized perspective on this and a poor grasp on some of the differences between hatchery programs that have substantial impacts on whether one should assume that the hatchery fish has a negative effect or not,” says Courter. “For example, if you integrate your broodstock with natural origin fish, then the genetic risk to the domestication factor that could potentially be translated to the natural origin population goes way down. The type of program being implemented is extremely important and needs to be part of the explanation of why in one instance you may observe a negative impact from hatchery fish and in another you don’t. It’s not a one-size fits all conclusion.”

As for how these findings should be handled or whether the stocking program should be re-instated, Courter declines to comment on that aspect. As a scientist, his aim is to ensure the best information is available – nothing more.

“I don’t have an agenda to see hatchery programs restarted in the Clackamas or anything like that. My aim is just to continue this line of research and identify more opportunities to evaluate the impacts of hatchery fish. Policy makers at the state agencies and policy makers will decide what the most appropriate next step is.”

Courter cautions against using their findings to form broad assumptions about hatchery and wild interactions in general. However, he does hope that their findings in the Clackamas will inspire further research into other water bodies in other jurisdictions.

“As I dove into this topic, I was struck by the lack of direct evidence for negative effects at the population scale. If you begin to understand that and not get drawn into the policy debate, but focus on what is the real material evidence for a direct negative impact from hatchery fish, that would be important because it will drive how the folks that are engaged in hatchery fish production perceive the available science. It’s important because it’s going to drive research going forward which is going to drive management decisions. That will dictate how important hatcheries are in the future.”