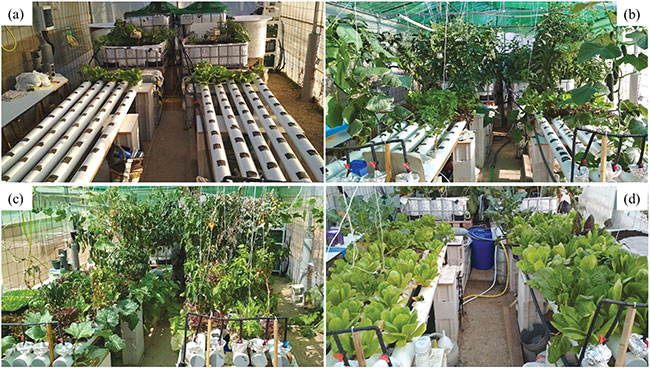 A study on micro-scale aquaponics systems in Spain emphasized the necessity of implementing strategies to minimize energy consumption and reduce labour needs.

The study looked at two optimized aquaponics systems for self-consumption, each with 4.56 square metres of cropping area and a one cubic metre fish tank. It yielded an annual production of over 69 kilograms of tilapia and 350 kilograms of vegetables, herbs and fruits. This is equivalent to 155 per cent of fresh fish and 129 per cent of vegetables yearly requirements for a family of four.

“Both aquaponic production strategies in this research, which sought to reduce the energy costs associated to regulating water temperature in cold seasons, were effective. Although, it should be noted that the use of the solar panel allowed higher production using less water and labour,” the study said.

Gina Patricia Suárez-Cáceres et al. conducted a year-long experiment – “Polyculture production of vegetables and red hybrid tilapia for self-consumption by means of micro-scale aquaponic systems” – which is now published in Aquaculture Engineering. The study intended to fill the the gap in studies that evaluate the use of a large number of plant species produced in aquaponic systems for self-consumption.

Over 20 vegetables, fruits and herbs were grown together with tilapia in the nine by five metres wide greenhouse. Red hybrid tilapia (Oerochromis niloticus x Oerochromis mossambicus) was chosen for the experiment. It has a high growth rate that is necessary to maintain the high biomass of plants.

The aquaponic facilities were identical and built according to the Food and Agriculture Organization (FAO) designs of micro-scale aquaponics systems. There were some revisions to improve the performance and handling of the facility. With focus on accessibility, materials used were easily available, low cost or recycled.

Water in MAS1 was heated by a self-constructed thermo-solar panel coupled with the system, preventing water temperature to drop below 13 C. When temperatures outside the greenhouse were close to zero degrees, two submersible heaters were placed in the fish tank, which were in operation for eight to 10 hours at night.

MAS2 stopped working as an aquaponic when the fish were removed to avoid heating the water. It was transformed into a hydroponic installation in which only the grow bed tank, the NFT and the sump were functioning, with a total volume of 180 litres. Biofertilizer provided nutrients for the hydroponic production. There were four fish harvests in both MAS1 and 2. The fifth was only in MAS1.