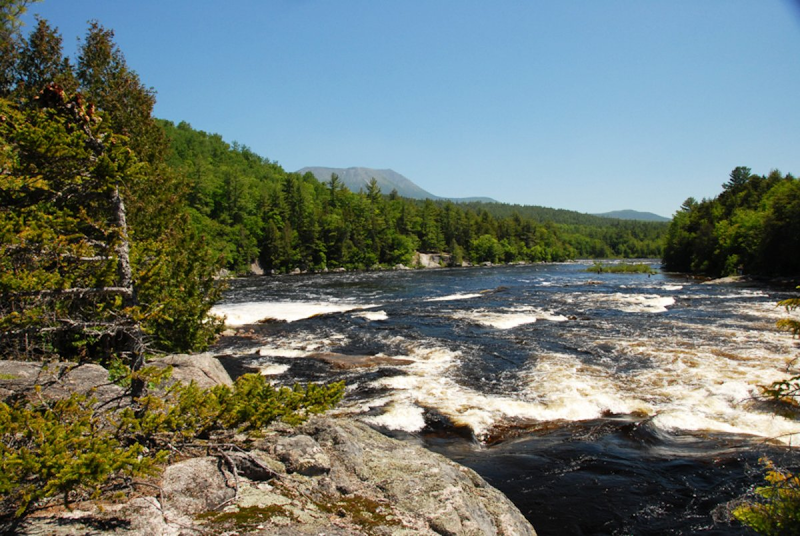 US conservationists are taking a page from their Canadian counterparts.

Inspired by the success of a multi-stakeholder collaborative project that restored depleted salmon stock in the Bay of Fundy, on Canada’s east coast, a public-private initiative in Augusta, Maine in the US, is taking on a similar challenge of restoring native populations of Atlantic salmon on the East Branch of the Penobscot river.

This novel project, funded through a NOAA Section 6 Species Recovery Grant of more than $1 million, will involve a partnership between Maine’s Department of Marine Resources (DMR), Cooke Aquaculture USA, US Fish and Wildlife Service, NOAA Fisheries, and the Penobscot Indian Nation to grow juvenile Atlantic salmon to adult size in aquaculture pens located near Cutler, Maine. The adult salmon will then be released into the East Branch of the Penobscot to spawn, a river with large amounts of high-quality salmon habitat.

Smolts raised from native broodstock by the US Fish and Wildlife Service at the Green Lake National Fish Hatchery in Ellsworth, Maine, and smolts captured in the wild by rotary screw traps will be used to stock the marine net pens in 2020, 2021, and 2022. Smolts will include only those from Penobscot River origin to ensure the genetic integrity of salmon released into the river.

The plan is to increase the number of smolts captured in the wild from the East Branch to be used to supply juveniles that will be grown out in the net pens. While hatchery-spawned fish help ensure an adequate supply of fish for recovery goals, those spawned in the natural environment are more robust due to the impact of natural selection which results in fish that are better suited to survival in the wild, the DMR explained.

The smolts will be placed in net pens under a limited-purpose aquaculture lease in Cutler, Maine, where they will be fed and managed, in cooperation with Cooke Aquaculture, for 16 to 30 months, during which time they will mature. The DMR will hold the lease on the pens while Cooke will supply the pens and feed for the salmon as they grow.

“We are committed to be part of this wild Atlantic salmon enhancement project in Maine. Cooke Aquaculture has the experience working with Atlantic salmon in their natural environment based on proven aquaculture and fish-health science. Working with the Penobscot Nation and government partners, together we will make this restoration program a success by seeing the fish return to their native waters,” said Glenn Cooke, CEO, Cooke Aquaculture USA.

Approximately 5,000 adult fish will be transported from the net pens to target tributaries and the mainstem of the East Branch of the Penobscot River in the fall of 2021 or 2022, where they will find suitable habitat to naturally spawn. This will result in more spawning adults than have been present in the Penobscot River for decades, the DMR said.

Using net pens to cultivate Atlantic salmon for conservation purposes at this scale has never been done in Maine. The first such initiative showing promise is a Bay of Fundy partnership between Cooke and Canadian provincial and federal governments, First Nations and academia.

As populations expand, the goal is to build healthy wild populations of Atlantic salmon on the East Branch, including the potential for downlisting. The estimated 5,000 adults produced by this effort could result in 20 times more eggs in the gravel in the Penobscot River basin compared to existing stocking and natural reproduction, said Sean Ledwin, director of DMR’s Searun Fisheries and Habitat Division.

The program will involve surveys of redds in spawning areas to assess spawning success of released fish. Released fish will also be tracked using passive integrated transponders tags and radio telemetry. Electrofishing surveys and use of rotary screw traps, along with genetic analysis, will be used to assess the abundance of offspring from this effort.

The program will also include a public outreach effort by the department and other program partners that will provide information on salmon and other sea-run species, and the impact of protecting ecosystems on which they rely, the DMR said.