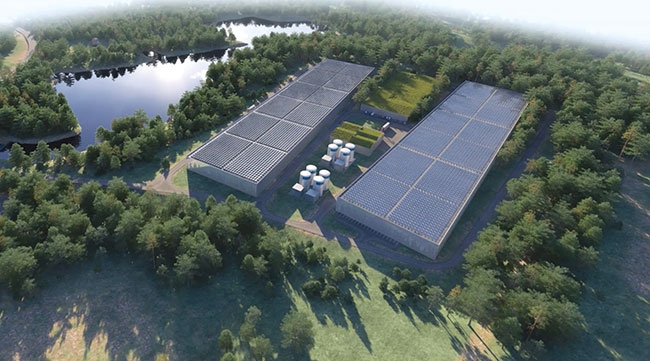 Nordic Aquafarms (NAF) is pushing back on what it calls “misleading” claims made by opponents of the company’s planned land-based fish farm near Little River in Belfast, Maine.

The Belfast Planning Board has been holding several public hearings on NAF’s plans. A meeting this Wednesday is supposed to be the last one before the board prepares to consider the aquaculture firm’s applications for permits for its salmon farm.

“A local group of opponents in Maine has made continued efforts to argue against land-based aquaculture in Maine, despite strong support from reputable environmental organizations, the general public and local and state politicians,” the press statement released by Nordic Aquafarm early Wednesday morning said. “Their claim that land-based seafood farms will render Maine unable to reach stated carbon emission targets are based on incomplete and misleading information.”

The company reasoned out that switching to locally farmed fish will reduce the need for airfreighted fish.

“The US imports vast amounts of fresh seafood, including salmon, by airfreight. Compared to these airfreighted products, NAF provides a product with almost one-third of the CO2 footprint,” the company said. “Local catch has the lowest carbon profile, but supply is not even close to meeting demand in the US. Thus, carbon reversal is achieved by displacing airfreighted products.”

The company also said that a Chinese study referenced by opponents of the project are not valid for land-based production in Maine and the proposed facility of NAF.

The referenced study has:

The company also said that its opponents are assuming that NAF will use 900,000 gallons of diesel fuel per year. However, the company said its permit applications are made out to account for worst-case scenarios and that its expected diesel consumption is less than 150,000 gallons per year. NAF also intends to use biofuels for its Maine facility to reduce emissions.

The company also said that a typical salmon serving of 4 oz from the NAF production in Maine has a CO2e (carbon equivalents) footprint of approximately 1.40 lbs. CO2e based on lifecycle analysis. A locally produced and distributed land-based salmon product has about the same CO2e footprint as chicken. In comparison, a similar portion of beef is approximately 6.1 lbs. CO2e.

“The local opposition is vastly overstating the carbon footprint from land-based seafood in Maine based on faulty assumptions and misleading conclusions. On the contrary, Nordic Aquafarms’ proposed facility illustrates that Maine is in a position to provide much more carbon-efficient conditions for land-based aquaculture than many other locations,” said Marianne Naess, executive vice-president for commercial at NAF.