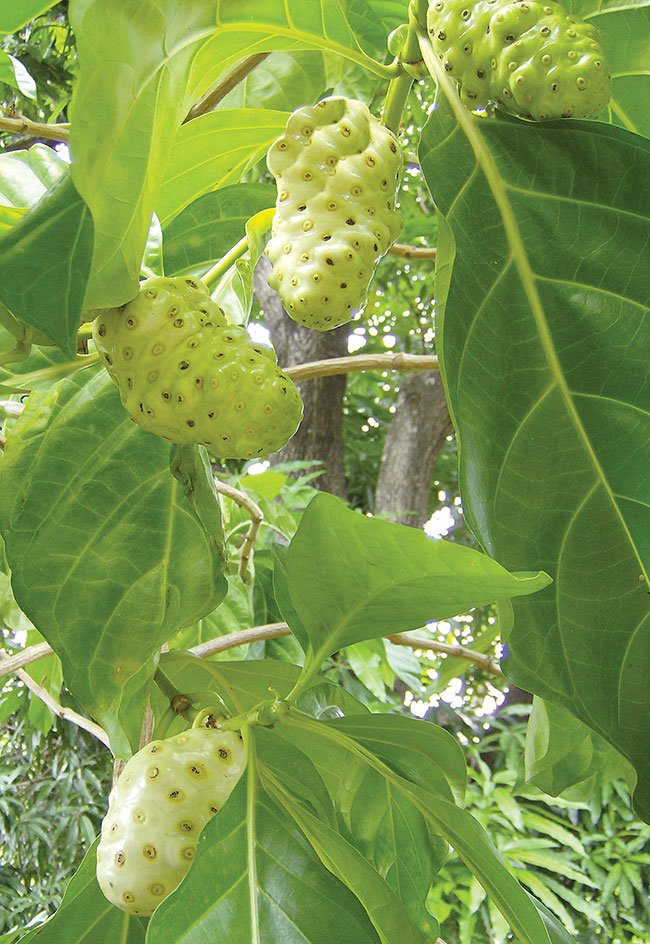 Noni fruit extract has been shown to contribute to the growth performance of whiteleg shrimp PL. Photo: Wilfredor via Creative Commons

Application of the fruit extract supplement during the 30-day trial was done at a critical time.

“Specific growth rate determined the growth of shrimp in terms of weight per day and is important during the early developmental stage of the animal due to their exponential growth during this time,” as cited in the study. “Effect of noni, Morinda citrifolia fruit extract supplementation on the growth performances and physiological responses of the hepatopancreas of whiteleg shrimp, Penaeus vannamei, post-larvae.”

The authors represent Universiti Malaysia Terengganu in Malaysia and Shantou University in China.

Noni fruit extract was incorporated into commercial shrimp pellet at the concentrations of zero to five per cent.

“The relationships between the digestive enzymes activities and the growth of the shrimp showed that the improvement in the digestive function of the shrimp indirectly improved their growth. Similarly, the enhanced antioxidant enzymes activities indicated improved in their immune response, thus increased their resistance towards stress allowing a healthy growth of P. vannamei post-larvae during culture,” they said.

The improvement of animal growth performance may be associated with Improvement of the digestive enzymes induced by noni fruit extract. Other studies have discussed that presence of active compounds in plant extract stimulates the secretion of digestive enzymes, which leads to improved appetite, food consumption and digestion.

“The increased in growth performances is also associated to the therapeutic effect of the extract as anti-pathogenic and reduces stress in the animal,” they said.

The crude extract of M. citrifolia fruit was obtained through drying and methanol extraction followed by concentration through rotary evaporation.

Whiteleg shrimp is popular among farmers due to its fast-growing nature at the average of one -1.5 grams per week. It is also known to have high tolerance for extreme conditions such as salinities and temperature.

Over the years, the steady entry of players into whiteleg shrimp farming has resulted in surge in global production. Over a 20-year period from 1998, harvested volume grew from 200,636 tons to 4,966,200 tons. Demand has also been increasing but the prices have not kept up. The less efficient producers, and FAO report recommended, may not be able to compete with those capable of producing more eco-friendly or cheaper products.