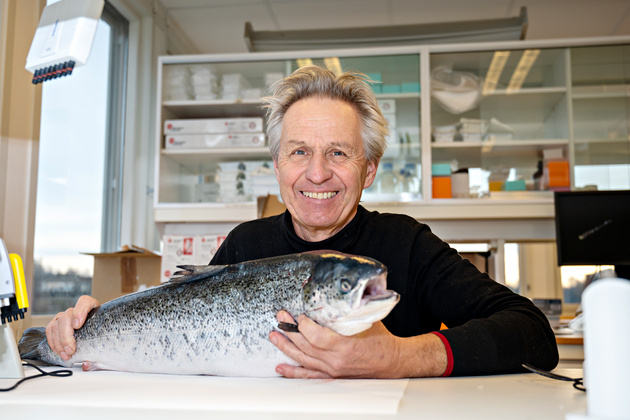 Nofima researchers and partners have announced the development of a promising method to sterilise salmon, which they’ve been working on for several years and further, can document that sterile salmon are just as healthy as fertile salmon.

There’s been a demand for sterile farmed salmon, as this can limit the impact of escaped farmed salmon in rivers; additionally, sterile salmon production will contribute to improved meat quality, less disease, and lower mortality.

To continue developments of this research project and to move into industrial large-scale production of sterile salmon, satisfactory health and growth must continue to be documented, and important production traits have been examined including body growth, smoltification, stress tolerance, salmon lice infestation, and mortality at sea. Scientists documented sterile salmon had no reproductive cells from the embryonic stage to the time of slaughter.

On the left, a cod embryo with reproductive cells (germ cells). These cells have been removed in the embryo on the right using Nofima’s sterilisation method. Photo: Helge Tveiten

The method developed by Nofima scientists blocks a factor that’s required for the development of reproductive cells at the embryotic stage, meaning that the fish never become sexually mature. There are several ways to sterilise salmon, such as triploidization and gene editing. However, triploid salmon have been rejected as an option in Norway due to welfare issues and the use of gene modified salmon in production is still not permitted.

Nofima senior scientists Øivind Andersen and Helge Tveiten have now begun working on different strategies for large-scale production of sterile salmon in partnership with the fish farming industry. The research has been financed by the Norwegian Seafood Research Fund (FHF) and is in cooperation with Aqua Gen and AquaPharma.