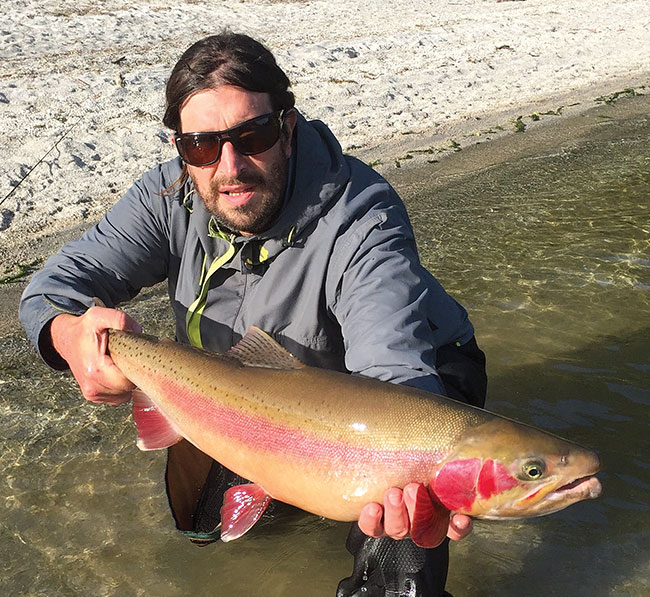 In New Zealand, salmon and trout aren’t native species. Wild populations arose from intensive stocking programmes and more than 100 years of management by 24 acclimatisation societies and what was known as the Central North Island Wildlife Conservancy. The early societies operated trout hatcheries to stock streams, rivers and lakes.

In Taranaki, a region in the west of the North Island, three local societies – Taranaki, Stratford and Hawera – believed that the streams running off Mt. Taranaki did not have sufficient natural recruitment to sustain a trout fishery, so work continued to raise trout for stocking. The Taranaki Trout Hatchery was established in Hawera in 1979 by the Hawera Acclimatisation Society. It was then inherited by the Taranaki Fish and Game Council in 1990 when the acclimatisation societies were amalgamated as a result of the Conservation Law Reform Act.

“In 1990, the hatchery was receiving up to 40,000 ova and raising up to 15,000 yearling Rainbow trout mainly for release into Mt. Taranaki ringplain streams – in particular, the Waingongoro River and Kaupokonui and Kapuni Streams,” says Allen Stancliff, fish and game officer at Taranaki Fish and Game. “Over time, stocking successfully established a Rainbow trout fishery in these streams in addition to resident Brown trout, but the return of hatchery fish to the angler was generally poor. In recent years Taranaki Fish and Game has focused on raising fewer but larger Rainbow trout for release into local lakes, which have limited or no natural spawning.” 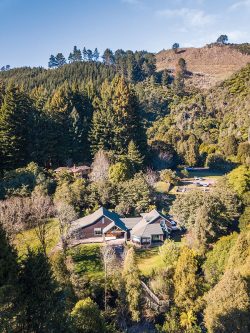 Egg source
The hatchery process begins in mid-July each year when 3,000 Rainbow trout ova are driven from the Ngongotaha hatchery near Rotorua on the North Island’s Bay of Plenty. The Ngongotaha hatchery obtains its broodstock each year from Lake Tarawera and checks for ripening twice weekly. When the broodstock are between three and four years old, the ova are stripped manually under anaesthetic using an air pump.

“The Ngongotaha hatchery was established in the 1900s to enhance the local sports fishery,” says Mark Sherburn, fish and game officer at Ngongotaha. “It produces around 90,000 fish a year, 98 per cent of which are Rainbow trout, the remainder Brown. A small number of Brook char and Tiger trout are also produced. Rainbow trout suit the local habitat well. They grow at an impressive rate and are popular with anglers.”

Ngongotaha also runs a selective breeding program to enhance specific genetic traits from the broodstock, according to Sherburn.

“A combination of wild and hatchery-reared broodstock are selected and scored based on desired traits. Hatchery fish are released as yearlings and have to survive two to three years before spawning but wild fish are recognised as being genetically robust and are therefore valuable for the breeding programme.”

“We monitor water quality and how it affects trout growth, and work with various agencies and landowners to ensure the best possible outcome for trout,” he says. 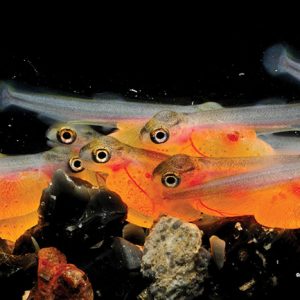 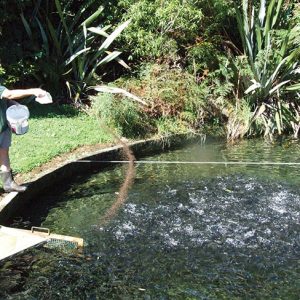 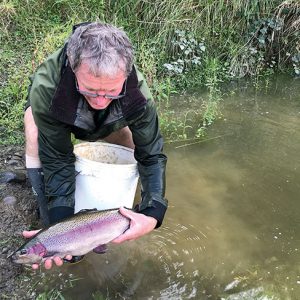 Optimal growing conditions
The Taranaki hatchery receives water from three 150-mm slotted PVC pipes, which gravity-feed water from a weir in the nearby Tawhiti Stream. Inside the hatchery are ten 300-litre ova troughs and eight 540-litre fingerling troughs, which all discharge into a central channel. Outside the hatchery are three concrete raceways of 8,250-, 9,900- and 11,500-litre capacities, respectively. The low-input system is run by 11 volunteers with oversight from Stancliff and volunteer team leader Malcolm Hurley.

The ova from the Ngongotaha hatchery are placed in wire mesh baskets suspended in troughs. Any opaque/dead ova are picked out each day. As they hatch (without inducement), the alevin or yolk-sac fry drop through the ova basket mesh and settle on the bottom of the ova trough. They’re kept in dim light until they begin to swim up. The fry are then hand-fed once a day with a fine pellet starter feed from Chile. They are held in the ova troughs (two troughs, approximately 1,500 fry in each) for several weeks before being transferred to two of the 540-litre fingerling troughs. When they start threatening to jump out, they are transferred to the smallest outdoor raceway. As they grow, they are hand-fed progressively with larger pellet feed.

“To ensure that the fish are bred in good condition, we monitor water temperature closely,” explains Stancliff. “In peak summer (late January-early February), it can exceed 20 C in the Tawhiti, at which time the fish can be susceptible to fungal (saprolegnia) infection if there is fin damage. Rock salt can be added to the raceways to increase salinity and prevent infection. Occasional treatment with KMn04 (potassium permanganate) is also possible. We catch a sample of fish periodically with a hand-net for inspection and increase feed as necessary to maintain growth.”

Taranaki Fish and Game has an approved Exotic Disease Response Plan for the hatchery, which outlines the procedures to take if an exotic fish disease is suspected on-site. Raceway brushes and nets are soaked in potassium permanganate as a disinfectant. Troughs and raceways are inspected daily for signs of sick fish, with samples taken and sent for analysis, if necessary. An outbreak of the whitespot disease Ichtyophthirius multifiliis in the hatchery has occurred on two occasions in the last 30 years, probably originating from native bullies in the Tawhiti Stream. Volunteers keep a lookout for signs of this disease, while each raceway is water-blasted and cleaned when emptied. 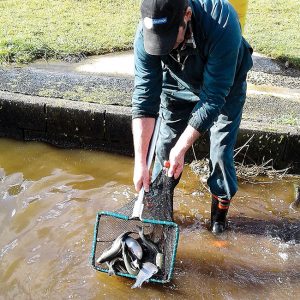 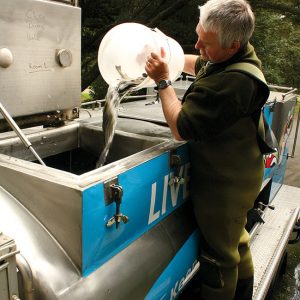 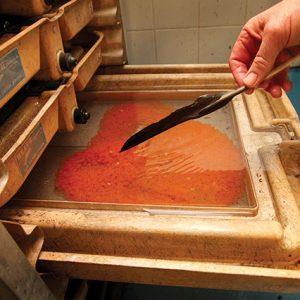 Ready for release
Before the first release from the hatchery, the fish’s adipose fins are clipped in April or May. This allows anglers to recognize a hatchery fish when they catch one. At fin clipping, the smallest fish in excess of stocking requirements are discarded. The fish are released progressively to reduce densities in the hatchery and allow the continued growth of the remaining fish. Early releases are around 150mm in length.

“Each year the staff produce a proposed release schedule, which is approved by the Council and focuses on release to lakes that have limited or no natural spawning but which provide a valued angling resource.” Stancliff says. “After more than 100 years of releases, almost all of our streams and rivers are managed for wild trout. The hatchery’s main focus now is on maintaining angling opportunities.”

Asset to anglers
Today, hatchery operations remain vital to the thousand-odd freshwater anglers who fish in the Taranaki region. Following their release, the growth and survival of hatchery fish is monitored through an angler diary scheme and angler satisfaction surveys are carried out to ensure that licence holders are happy, says Stancliff. There is no minimum size limit in Taranaki, but experience has shown that few anglers keep small fish. Bag limits are set at two fish per day for both lakes and rivers. Now, with a new project underway, Stancliff is optimistic about the future and grateful for the number of volunteers who have been key to their work.

“We’ve been focusing on raising 700 larger Rainbow trout for kids’ trout fishing events and for release into the Stony and lower Patea rivers,” he says. “The volunteers have been excited to see how large the fish can get to, and the hatchery’s running is undoubtedly reliant on their efforts. Without them it simply wouldn’t be economic to run.”