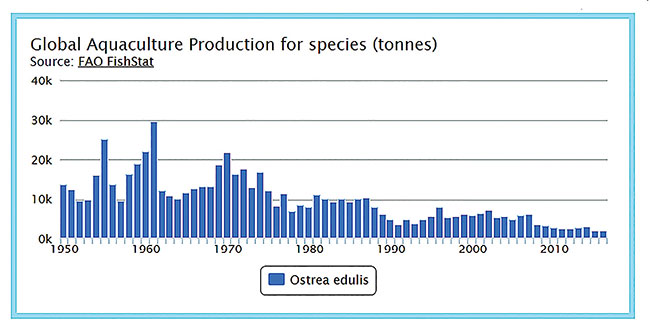 “The best larval production results were obtained when the three-per-cent food ration was combined with a water flow rate of 2 L h−1 oyster−1,” Dr. Verónica Maneiroa and her team said in the study, “Effects of food ration, waterflow rate and bacteriological levels of broodstock on the reproductive conditioning of the European flat oyster (Ostrea edulis, Linnaeus 1758).”

Thirty oysters in this group, conditioned in a tank, produced almost eight million larvae. Larval release started four or five weeks after the beginning of conditioning in all the oyster groups. At size 320 to 330μm, the larval survival rates were between 65 to 75 per cent.

Other groups had food rations at six and nine per cent, and water flow rates at 1 L h−1 and 3 L h−1.

Oyster, which are filter-feeding organisms, were fed continuously with microalgae.

Food availability is closely related to the reproductive performance of oyster species and can decrease flat oyster conditioning time and increase larvae release. Most often, ration is determined using the weight of the broodstock animal.

Water flow rates have significant impact on broodstock mortality. Broodstock mortality in the best performing group was at 20 per cent. Across all groups, oyster conditioned at a flow rate of 3 L h−1 oyster−1 had the highest mortality rate. Authors said this coincided with the highest levels of vibrio and heterotrophic bacteria in both meat and intervalvar fluid.

Conditioning broodstock and growth, the authors explained, are influenced by the amount of food in the water.

“In bivalve culture, feces and detritus accumulate and modify the characteristics of the water, and can adversely affect the health, gametogenic development and maturation of bivalves,” the study said.

“Thus, the water flow rate has to be taken into account during broodstock conditioning; a high water flow can initially increase the clearance rate until bivalves are unable to ingest more particles and low flow could increase sedimentation of organic material and induce bacterial proliferation.”

This backdrop has encouraged projects and numerous research on optimizing oyster production and establishing a reliable protocol for broodstock conditioning in hatcheries in order to get the best number of viable larvae whole-year round, especially outside the natural season.

This study is the first report to examine the relationship between food ration, water flow and bacterial load, and their influence on the conditioning and survival of flat oysters. This study was published in Aquaculture Reports.

As a luxury seafood, European flat oyster usually costs 3.5 times higher than Pacific cupped oyster, according to the FAO.