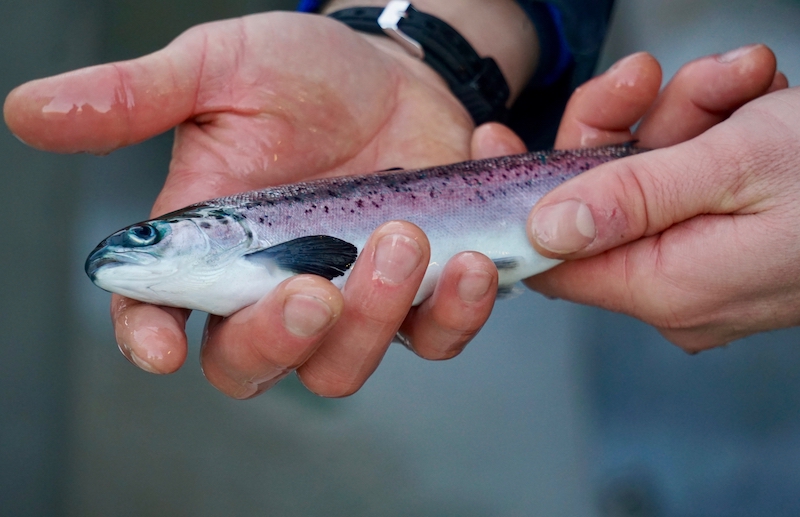 The £55-million (US$72.3 million) Barcaldine Hatchery is now nearing its official opening – likely by spring 2020 – after a two-year construction period. The first batch of eggs arrived at the hatchery last January. The RAS grown smolts weighed an average of 160 grams, which is more than double the size of smolts Scottish Sea Farms produced previously using traditional hatchery methods.

Scottish Sea Farms’ freshwater manager Pål Tangvik said producing the first batch of smolts at the new hatchery was a major milestone for the company.

“The new hatchery has given us greater control over key factors, including water quality, oxygen levels, temperature, light and speed of flow, meaning we have been able to ensure the best growing environment for the salmon.”

The result, he said, is bigger, more robust smolts that are better able to withstand the natural challenges of the marine environment. The bigger smolts also means shorter time spent at sea – by up to two months – reducing their exposure to the challenges of the ocean environment and increase their survival rates.

Owing to the facility’s ideal location on the shores of Loch Creran, the young salmon were transferred directly from the hatchery to the well-boat ahead of their onward journey to one of Scottish Sea Farms’ Shetland farms, removing the need for transportation by road or air – another huge step forward in terms of fish welfare, the Scottish salmon producer said

The 17,500-square-meter facility, which includes four incubation units and four hatcheries, promises to be every bit as transformational with regards to environmental performance, the company said.

“Incoming water is filtered to remove any particles then disinfected using UV light and circulated to anywhere in the hatchery, where it is maintained at a constant temperature of between 12-14 degrees, before being cleaned again and recirculated every 20-30 minutes,” explained Noelia Rodriguez, operations manager for the Barcaldine Hatchery.

In addition, the building uses a biomass energy system – thought to deliver the biggest CO2 savings of any renewable heat source – to provide heating and hot water. There is also provision for a hydro scheme to generate even more energy in a greener way, Rodriguez added.

“The RAS technology enables us to control with pinpoint accuracy when the salmon are ready to go to sea, giving the fish the best possible experience and giving customers the world-over more security over supply than ever before,” Scottish Sea Farms’ managing director Jim Gallagher said.