News & Views
New salmon hatchery in the works for BC

A $1 million salmon hatchery is being planned on the Charters River in B.C., Canada, to address water access issues in the area. The new hatchery will be the result of a partnership between the Sooke Salmon Enhancement Society and The Juan De Fuca Salmon Society. 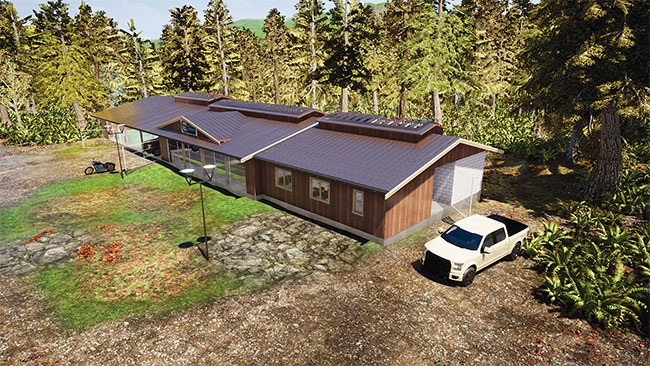 The mock-up above shows an early conception of what the new Sooke River Jack Brooks Hatchery will look like. A $1 million salmon hatchery is being planned on the Charters River in B.C.

Bill Pedneault, hatchery manager for the Sooke Salmon Enhancement Society which operates the Jack Brooks Hatchery in the area, says that they raise 450,000 chinook juveniles and 150,000 cohos, but water issues have limited their ability to make the most of those numbers.

“In the spring, around the time when the water temperatures warm up and they start feeding well, our water supply dries up so that means we have to get rid of them at a smaller size than would be ideal,” says Pedneault. “Of that 450,000 that we raised in the spring, we only end up with about 75,000 that we can hold on site to the optimum size of 4-5 grams.”

“We negotiated a water supply for the hatchery right from their water pipes, so they’re not having to deal with water intakes and all the problems that come with that,” says Wally Vowles, hatchery manager for the Juan De Fuca Salmon Society.

“With unlimited water, so to speak, our full production will vary from year to year depending on what we get for broodstock,” adds Pedneault. “But whatever we have on site we’ll be able to bring them right through to the full desired size.”

If fundraising goes well, the new hatchery could start taking in broodstock next fall. The project has already seen a great deal of support from the community at large. Vowles theorizes that people are engaged in the plight of resident killer whales, for whom the salmon are a key food source. With fewer salmon in the waters predation has become a challenging issue in the area.