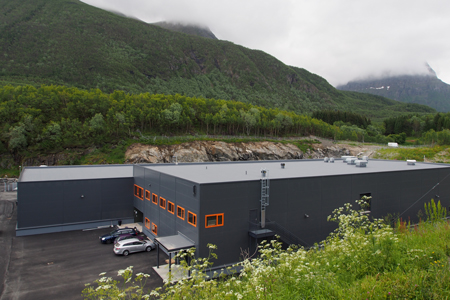 A new center for salmon breeding and egg production at Steigen, in northern Norway, was

The facility, a cooperative project between AquaGen AS and Nordnorsk Stamfisk AS (NST) was built with a price tag of 160 million Norwegian kroner (US$19.5 million).

The facility was launched with the capacity to produce 100 million eggs per year, with a potential for 50 additional millions per year in the future.

According to a press release from AquaGen, this will “contribute towards the increased insurance of delivery together with reduced biological risk, making the Norwegian aquaculture sector better equipped for sustainable growth in years to come.”

Nordnorsk Stamfisk AS (NST) is the result of a strategic cooperation between several large aquaculture companies, spearheaded by AquaGen, and three of the world’s leading producers of seafood – Cermaq Norway AS, Nordlaks Oppdrett AS and Nova Sea AS.

Odd Strøm, chairman of the NST board and CEO of Nova Sea says; “It has been great fun, and a big thrill to follow the establishment of the brood fish and egg production facilities in Steigen all the way from the conception of an idea through to the cutting edge facility we see today.”

The northern part of Norway is responsible for close to 40% of the country’s total salmon production. However, most salmon eggs, have until recently been produced in the central and south part of Norway. The opening of the new facility in Steigen provides the infrastructure needed for the entire value chain available in northern Norway.