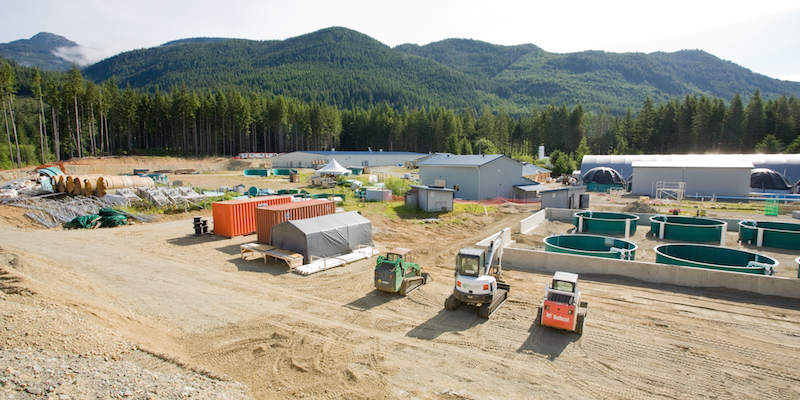 The first of the new systems to be completed will be at the company’s Dalrymple freshwater facility (pictured above) near the community of Sayward on Vancouver Island. Once complete

Marine Harvest Canada recently revealed that it had begun working on installing seven new lines of recirculating aquaculture systems (RASs) at two of its hatchery sites on northern Vancouver Island, in British Columbia.

Company director of public affairs Ian Roberts said a few weeks ago that the first of the lines of six-metre-diameter tanks in the $40 million project will be completed early next year, with the first fish to go in almost immediately afterwards.

The project, which will double MHC’s freshwater rearing capacity to over 1,500 tonnes, is expected to be completed sometime in 2017.

The first fish to go into the new sets of six-metre-diameter tanks will be at the company’s Dalrymple freshwater facility near the community of Sayward, about 40 kms north of Campbell River.

Roberts explained that these new developments will help provide additional smolts to support recent growth opportunities in the company’s ocean net-pen farms. MHC, in partnership with the Tlatlasikwala First Nation, had recently been granted permits to raise Atlantic salmon at two new ocean sites near Hope Island, at the northeast end of Vancouver Island.

Roberts also emphasized that each of the seven RAS systems will be self-contained so that each operates independently from the others, to ensure that any risk to groups of fish is minimized.

MHC freshwater production director Dean Guest said two of the lines of RASs, each consisting of 12 six-metre-diameter tanks, will be for first-feeder parr. The other five lines, for smolt growout, will each have four 14m-diameter tanks each containing 400 cubic metres of water. All told, said Roberts, the systems will have a total of 9,000 cubic metres of rearing space.

The company said that when finally completed, both facilities will be among the largest salmon-smolt producers in North America with 15 million fry to be fed in the first 18 months of operation.

And MHC stressed that the investment in the new hatchery infrastructure will enable the company to increase production while at the same time also improving environmental performance.

“Recirculation uses about one-hundredth of the freshwater as a traditional flow-through aquaculture system,” states a company statement, adding that MHC has been using and developing RASs since the late 1990s.

“It was surprising that a simple system that was inexpensive to build uses less energy than competing systems,” he said. “We designed the system to be very simple and compact and the only automation is the oxygen system and the drum filter.”

He added: “I would be shocked if I saw anything better. Performance (in prior tests) has met or exceeded our expectations. The engineering design is unique because water flows throughout the system without the many pipes and valves required in older models.”

“The full flow passes through each process of the treatment system with no side stream components or use of piping.”

“We are using local contractors for the building construction and other important trades,” said Roberts. “The biofilters and drum filters are supplied by Inter Aqua and Pentair. Construction began this past summer, with excavating and preparation of the ground.”