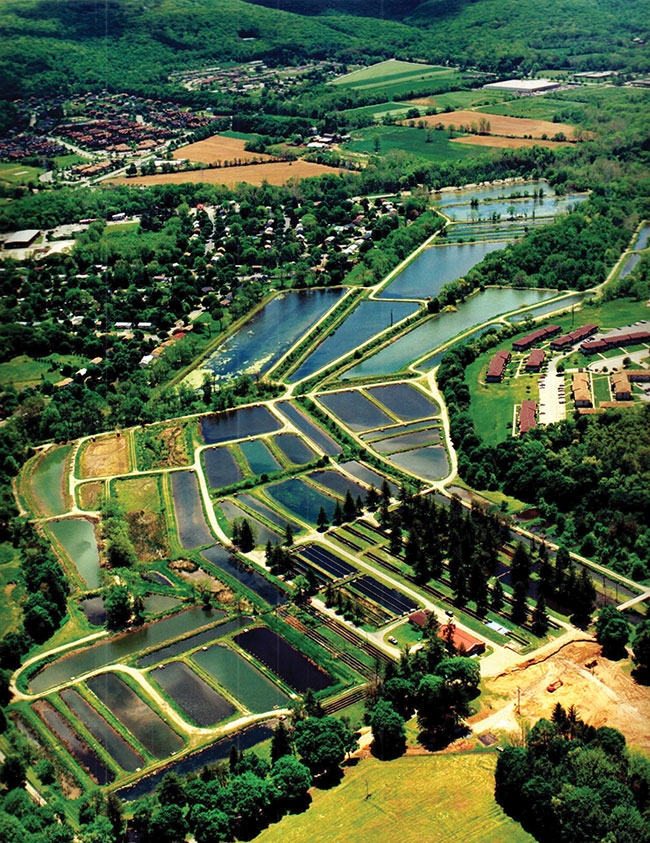 Fish stocked at the hatchery include walleye (2.3 million), golden shiners (655,000), channel catfish (598,174) and muskellunge (343,311) among others. Hatchery Superintendent Craig Lemon says that while favorable weather conditions did play a role, he is quick to credit the hard work and ingenuity of the crew who work at the hatchery.

“The crew has matured,” says Lemon. “I’ve been here 30 years; the rest of the crew are young guys who’ve been here three to five years. Everybody has interests and ideas about how to do things differently.”

Lemon says that the 200 acre facility is over 100 years old and has about 65 earth ponds – structures which were old and breaking down. In addition to repairing and reworking some of the pond bottoms, the crew also looked at other approaches to their work.

“We started using the ponds twice instead of just once,” says Lemon. “A lot of our production starts in April and we harvest a lot of ponds in June and typically they would stay empty after that but we started refilling ponds in June and our growing season goes probably till November.”

Aerial view of the hatchery site.

The hatchery is a multi-faceted operation with indoor and outdoor tanks and two recirculating systems – one for cool water species and one for warm water species.

“With the ability to change water temperatures, we can pretty much accommodate almost any species and grow them at optimal temperatures,” says Lemon. “Some of our species start indoors and go outdoors, some start outdoors and come indoors. We have a lot of options. This facility has a good mix of ponds and tanks that gives us the ability to raise any species we want.”

The challenge, Lemon notes, is in trying to take on too much and recognizing limitations. The hatchery has had several poor years in a row as it relates to small mouth bass. While the lower numbers do serve as an incentive to improve them in the coming year, there is only so much they can do to affect those numbers. Small mouth bass are highly dependent on weather conditions and they still broke their record when looking at the overall number of fish.

“We’re not shooting to break records,” says Lemon. “One of my major goals is to stock fish that will survive in the wild and will be used by sportsmen out there. I’ve always said I wanted my tombstone to read ‘he raised fish that survived in the wild.’”