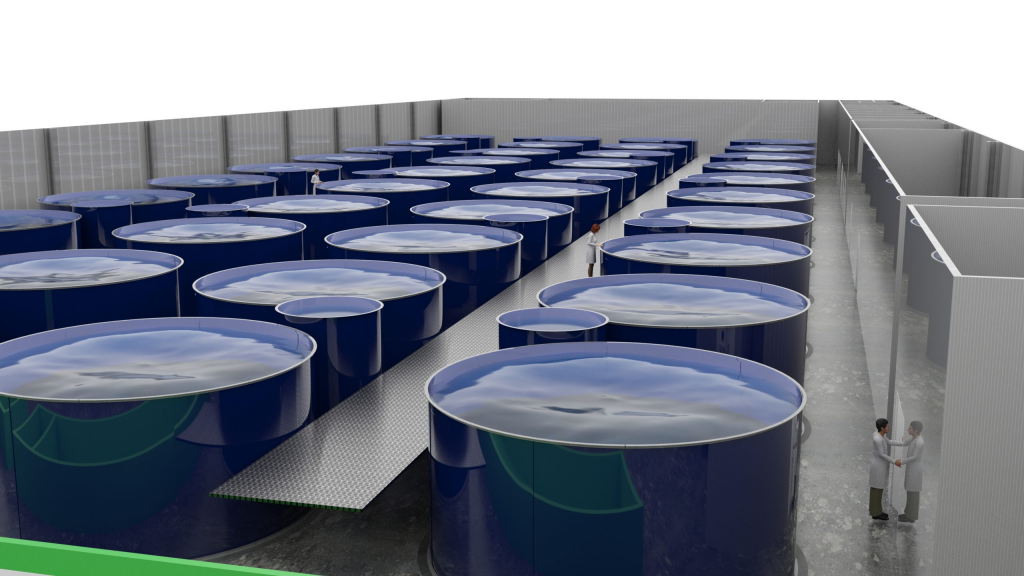 photo rendering of the rearing tanks inside the shrimp production building (Photo: NaturalShrimp)

NaturalShrimp Inc., has announced plans to build a second 40,000-square-foot production plant at its LaCoste, Texas property where a fire gutted the company’s pilot plant some four months ago. The facility which the Site 2 plant will mirror is still under construction.

NaturalShrimp, best known for patenting the first commercially-operational recirculating aquaculture system (RAS) for shrimp aquaculture, was dealt a tremendous blow when its pilot plant was razed on March 17. The fire broke out just as the company had began restocking of 1.5 million post-larvae shrimp.

In a press statement, William Delgado, chief financial officer of NaturalShrimp, announced some of the latest developments in the company’s rebuilding efforts.

“Doubling the size of our operations at La Coste will provide us the capacity to scale our business to a level we believe will be required to meet the demand the marketplace will have for our product,” said Delgado.“Our strategy is to aggressively expand throughout the country and become the market leader in fresh, never frozen, naturally grown shrimp, without the use of antibiotics or toxic chemicals.”

Office suites, a conference room and a reception centre will be built for use by the two facilities.

Employees will gain access to the building through a separate security and biosecurity entrance. The building will also house a water quality laboratory, aeration, heating and feeding rooms, restroom and showers, and some office and storage spaces. The harvest area will support the capturing and packaging of the harvested shrimp, the press release said.

Work at converting an existing 8,000-s.f. greenhouse into a water treatment plant using a patented electrocoagulation (EC) filtration system is still going on. The internal renovation is nearing completion to make it ready for receiving the filtration system components.