The European Percid Fish Culture (EPFC) group is a thematic working group within the European Aquaculture Society (EAS) that has, for the first time, organized a hands-on workshop focusing on the out-of-season reproduction of pikeperch (Sander lucioperca). 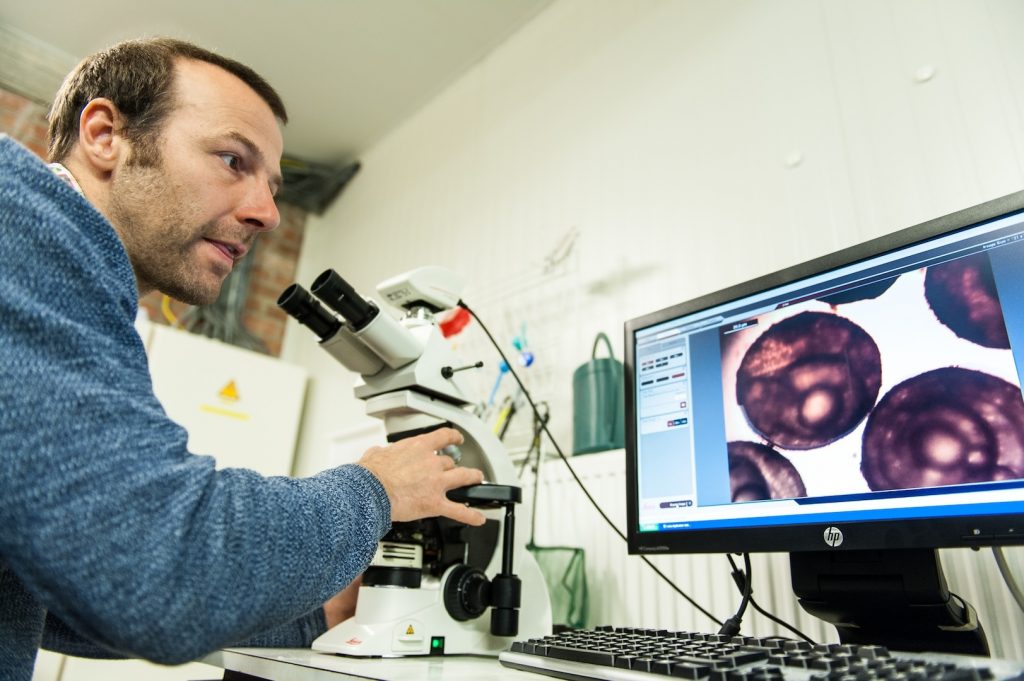 Facilitated and hosted by Inagro, an agricultural research and consulting organization based in Belgium, and taught by skilled experts Daniel Żarski (UWM, Poland) and Uroš Ljubobratović (NARIC HAKI, Hungary), the workshop combined theoretical and practical classes on all relevant aspects of the artificial reproduction of pikeperch. This included everything from induction, gamete stripping and fertilization, to quality assessment and management throughout the process.

In the months and weeks prior to the workshop, Inagro’s hatchery prepared its spawners so that the fish were ready to reproduce during the week of the workshop. Dr. Stefan Teerlinck (Inagro) explains: “By carefully regulating the temperature, light, and feeding regime a reversed season was simulated resulting in an artificial spring in September and the induction of the gametogenesis in our broodstock fish.”

On their first day at the workshop participants were introduced to evaluating the gonadal maturation stage and administering hormonal regulators to induce completion of the maturation and spawning.

As the quality of the gametes is directly correlated with fertilization success, it should become a standard procedure for hatchery managers to consistently evaluate for each reproduction event the oocyte and seminal quality in their breeders.

“We often encounter farmers who put a lot of effort into successfully preparing their broodstock for the reproductive season,” says Żarski “but who fail during the spawning operation owing to a lack of knowledge of the possible protocols to be used, or simply due to applying the wrong protocols. For instance, in recent years several studies have indicated that a sound protocol for evaluating egg quality is crucial in pikeperch. The detection of low quality gametes is essential not only for directing efforts towards those gametes that yield the highest potential, but also to assure that breeders who annually produce lesser quality gametes can be detected and discarded from a broodstock group.”

Following injection, pikeperch females with oocytes in the final maturation stage (i.e. exhibiting the stage after germinal vesicle breakdown) were checked every four hours for ovulation and were stripped when the egg disposal was noticed. This included some night shifts, but not surprisingly these shifts positively affected amicable relations amongst the participants.

If of good quality, the oocytes were fertilized with viable sperm from three different males.

As pikeperch produce sticky eggs, the eggs’ adhesiveness needs to be removed following fertilization and prior to stocking in the incubation jars. Three different methods were demonstrated to remove the adhesive layer: application of tannic acid, alcalase treatment and the use of clay and milk. If applied correctly, there should be no difference in hatching success amongst the three methods, however the embryogenesis is more difficult to observe in eggs following the clay treatment owing to their opaque clay cover.

After the unsticking process, the eggs were incubated in McDonald-type hatching jars. The eggs must be completely separated with no small clumps of eggs present.

The water flow is set to gently stir the eggs, just enough to suspend or fluidize the eggs. During the incubation period, it is good practice to keep track of the embryonic development. At 16°C hatching starts after five to six days post-fertilization, often with a wide timeframe of 24h to 72h between the first and the very last hatchings. However, forced synchronous hatching can be induced by a sudden drop in dissolved oxygen content. This can be realized by transferring the eggs from the incubator to a plastic container in the absence of any aeration.

During the last day of the workshop it was shown how the quality and viability of freshly hatched larvae can be assessed with respect to the absence of (the most frequently occurring) malformations, dimensions of the pericardium, morphology of the yolk-sac, etc.

Hatched larvae were collected in Inagro’s 200 litre hatchery tanks equipped with an automated cleaning arm for scraping the floor and walls of the tank.

In the first days after hatching the larvae show a particular swimming behavior in which they swim upwards in a spiral for a few seconds and then slowly sink downwards. A few days later they start to swim horizontally. At that point, the water flow in the hatchery tanks can be slightly increased and start-up of the surface skimming. The latter proved its value in controlling swim bladder inflation problems. Workshop participants did not look into the further larviculture phase, as this was beyond the focus of the workshop on the propagation and larval production of pikeperch.

Interested parties who could not attend this year’s workshop will have another opportunity in September 2018. Express your interest by email to Stefan.Teerlinck@inagro.be